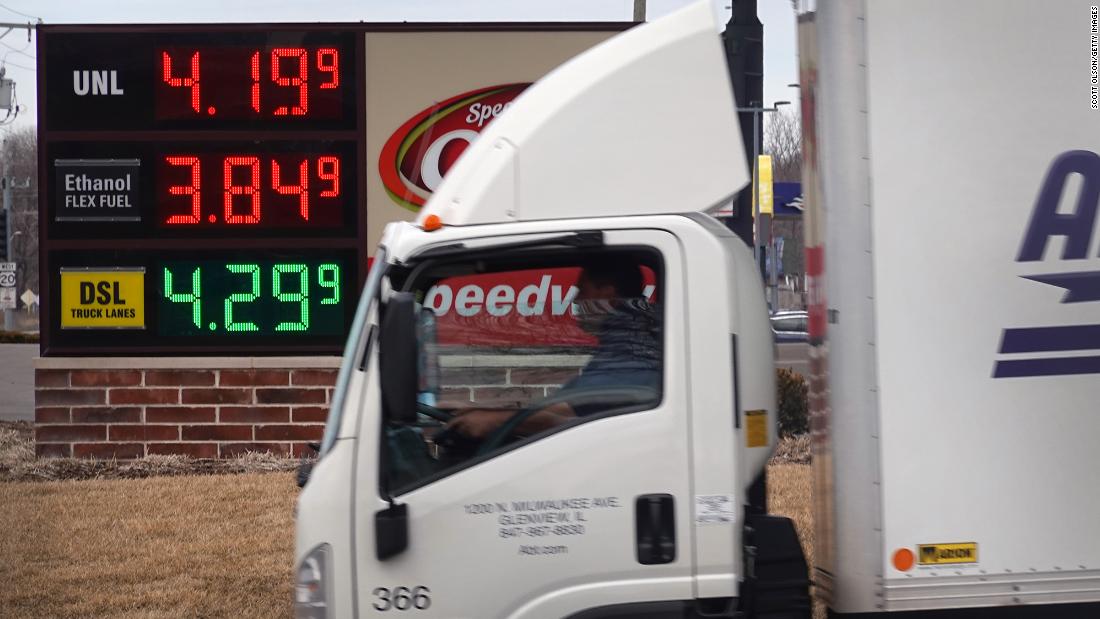 The AAA national average stands at $4.01, up 9 cents a gallon since Saturday’s reading, and up 47 cents, or 13%, since before Russia invaded Ukraine 11 days ago.

The daily weekend increases are larger than any one-day jump in price since Hurricane Katrina slammed the US Gulf Coast and damaged much of the nation’s oil and gas producing regions in 2005, sending prices soaring.

There are still some portions of the country where $4 a gallon gas is still rare. The large swath of central states, from North Dakota south to Texas, have averages no higher than $3.71 a gallon.

But prices are rapidly increasing everywhere. The lowest statewide average is in Missouri, where unleaded stands at $3.60 a gallon. But that’s up 28 cents, or 8%, in just the last week.

There are now 18 states, plus Washington DC, where the price is $4 or greater. All of the Northeast and Mid-Atlantic, as well as the West Coast, Nevada, Arizona, Illinois, Alaska and Hawaii have statewide averages at or above $4. And three additional states, Florida, Michigan and Indiana, are less than half-a-cent away from the $4 mark.

The highest prices are being seen in California, where the statewide average stands at $5.29 a gallon.

“This is not the end of it,” said Tom Kloza, global head of energy analysis for the Oil Price Information Service, which provides data to AAA from 140,000 stations nationwide. Wholesale gasoline prices rose 23 cents in trading Friday, an increase Kloza said would be passed onto consumers in short order.

“It’s absolutely out of control,” he said.

Prices have been rising because Russia is one of the world’s major oil exporters, with most of its output going to Europe and Asia. Russian oil made up only 2% of US imports in December, according to Energy Department data.

But oil is priced on global commodity markets, so the impact on global markets is felt everywhere.

The sanctions placed on Russia’s economy following the invasion have so far exempted oil exports. But traders have been reluctant to purchase Russian oil due to uncertainty about closing transactions given the limits on the the country’s banking sector, as well as concerns about finding oil tankers willing to dock in Russian ports.
There have been calls for the United States to ban the import of Russian oil. But that probably would have limited impact on global or domestic prices since so little is being shipped to US markets, Kloza said.

“It’s not mission-critical. Canada, Mexico, Saudi Arabia — those are the big boys” in terms of US oil imports, Kloza said. “Russia is a bit player.”

Even without a ban on US imports, Kloza expects the average price could rise to a new record of between $4.25 and $4.50 a gallon. Such a rapid price spike is making a particularly strong impression on consumers, he added.

“When you get increases this quick, and this dramatic, you really scald the public,” Kloza said.

The average price one year ago was $2.76 a gallon, as the market was still recovering from the plunge that occurred early in the pandemic and stay-at-home orders and business shutdowns slashed demand for gasoline.