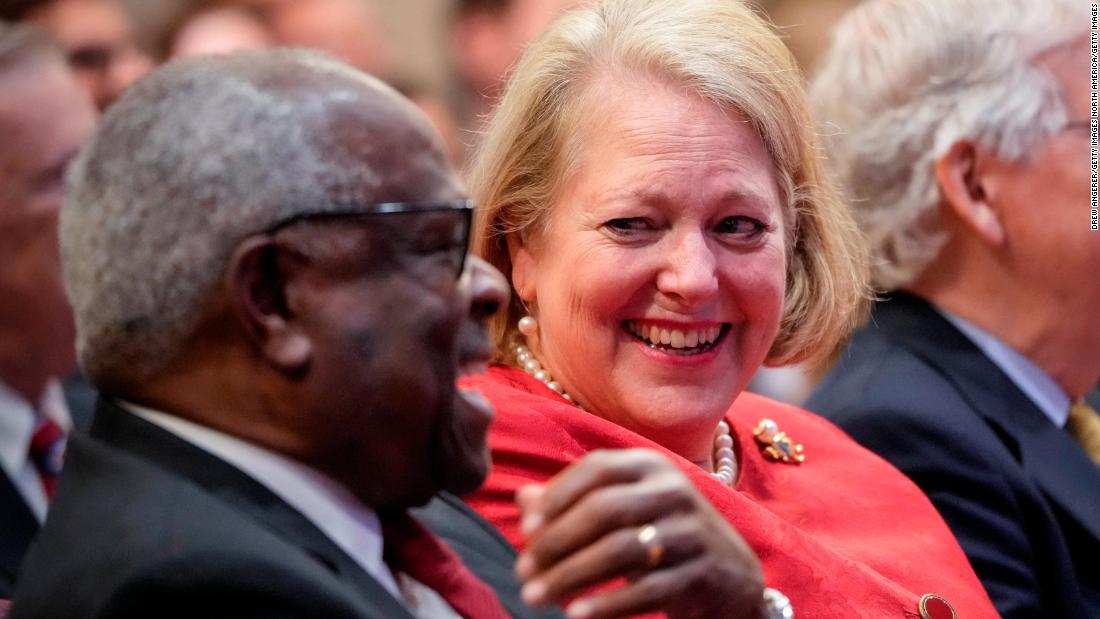 The rare interview with conservative publication the Washington Free Beacon, comes as progressives and some legal ethics experts see a potential conflict with Thomas’ activism and her husband’s work on the Supreme Court.

They point specifically to a recent January order when the court — over the dissent of Clarence Thomas — cleared the way for the release of presidential records from the Trump White House to a congressional committee investigating the US Capitol attack.

“Federal recusal law says that any justice ‘shall disqualify’ if their impartiality might reasonably be questioned,” said Gabe Roth of Fix the Court, a group seeking more transparency from Supreme Court justices.

“Here Virginia Thomas attended the rally on the ellipse, she is close to those who have been subpoenaed by the Committee and she is involved in several groups that have cast doubt on the results of the 2020 election,” he said.

But in the new interview, Ginni Thomas said that “the legal lane is my husband’s” and she seemed to distance herself from the January 6, 2021, events.

“Like so many married couples, we share many of the same ideals, principles and aspirations for America,” Thomas told the Free Beacon. “But we have our own separate careers, and our own ideas and opinions too,” she said.

“Clarence doesn’t discuss his work with me, and I don’t involve him in my work,” she said.

Supreme Court justices largely make their own decisions whether to recuse themselves from a case, acting cautiously because if they were to step away, no other judge could take their place to rule. Critics say the system is flawed and there should be more transparency and accountability.

In the interview, Ginni Thomas, who runs a political consulting firm, stressed that she is going to continue her role as a political activist.

“If you are going to be true to yourself and your professional calling, you can never be intimidated, chilled or censored by what the press or others say,” she said.

She also clarified her actions on January 6. She said that she attended a rally but returned home before former President Donald Trump took the stage at noon. Rioting broke out after that.

“I was disappointed and frustrated that there was violence that happened following a peaceful gathering of Trump supporters on the Ellipse on January 6th,” she said and added that she played “no role” with those who were planning and leading the events. “There are stories in the press suggesting I paid or arranged for buses. I did not.”

“There are important and legitimate substantive questions about achieving goals like electoral integrity, racial equality, and political accountability that a democratic system like ours needs to be able to discuss and debate rationally in the political square,” she said.

Social media posts obtained by Slate show her cheering on the January 6 rally that preceded the Capitol attack, though she later made clear, according to Slate, that she had published the posts before the rally turned violent.

Since the rally she has signed a letter to House Minority Leader Kevin McCarthy urging the Republican conference to remove both GOP Reps. Liz Cheney of Wyoming and Rep. Adam Kinzinger of Illinois due to their “egregious actions” as members of the House of Representative’s select committee investigating the insurrection. Cheney and Kinzinger are serving at the request of House Speaker Nancy Pelosi.