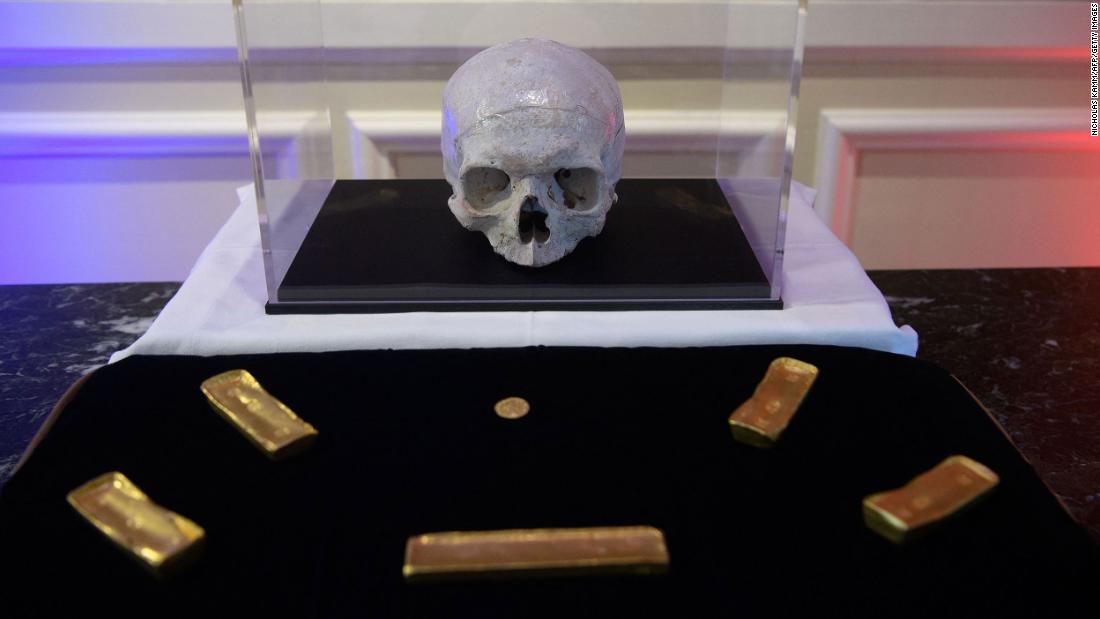 Seven artifacts were transferred from US Immigration and Customs Enforcement’s Homeland Security Investigations to French Ambassador to the US Philippe Étienne during a formal repatriation ceremony Wednesday at the French Embassy in Washington.

Among those items were the five gold ingots, or bars, from the 18th century.

The gold bars, used as a form of currency at the time, were on a ship that sank off the coast of France after returning back from a two-year voyage to China. Some of the items were recovered at the time but it was mostly forgotten until the mid-1970s, Homeland Security Investigations Special Agent David Keller, who led the US investigation, told CNN.

At the time, a group of divers discovered the wreck and applied for a French permit to excavate the site. But the excavators ultimately looted the wreck site, according to Keller.

The French government indicted several of the excavators in the early 1980s, and it’s been “chasing down these artifacts and the ingots from the vessel ever since then,” he said.

The bars made an appearance in a 1999 episode of “Antiques Roadshow,” when a woman presented the ingots and pieces of Chinese porcelain, claiming they had been found off the coast of Africa, according to Keller.

But it wasn’t until years later that the bars resurfaced and Homeland Security Investigations federal agents got involved in the case.

In 2018, a couple in Tampa consigned the ingots to an online auction in Santa Rosa, California, that initially listed the items as being from the French wreck, Keller said. That prompted the French government to notify Homeland Security Investigations, the primary US federal agency that investigates stolen antiquities.

The agency seized the items under US law as part of the administrative seizure process, leading to the repatriation of the items to the French government this week.

“We are very grateful to the United States for the action taken by its services to return these artifacts,” Étienne said in a statement. It “emphasizes the quality of cooperation between the French and American customs, police, and judicial services in the fight against trafficking in cultural property.”

As part of Wednesday’s ceremony, the US also returned a coin believed to be part of the “Lava Treasure” collection that had been traced to a transport ship lost in French territorial waters more than 1,700 years ago off the coast of Corsica in the Mediterranean Sea. The coin was seized by Homeland Security Investigations from a Los Angles auction house in 2013.

In a third case, a human skull found in Houston was traced back to a collection from the Catacombs in Paris.