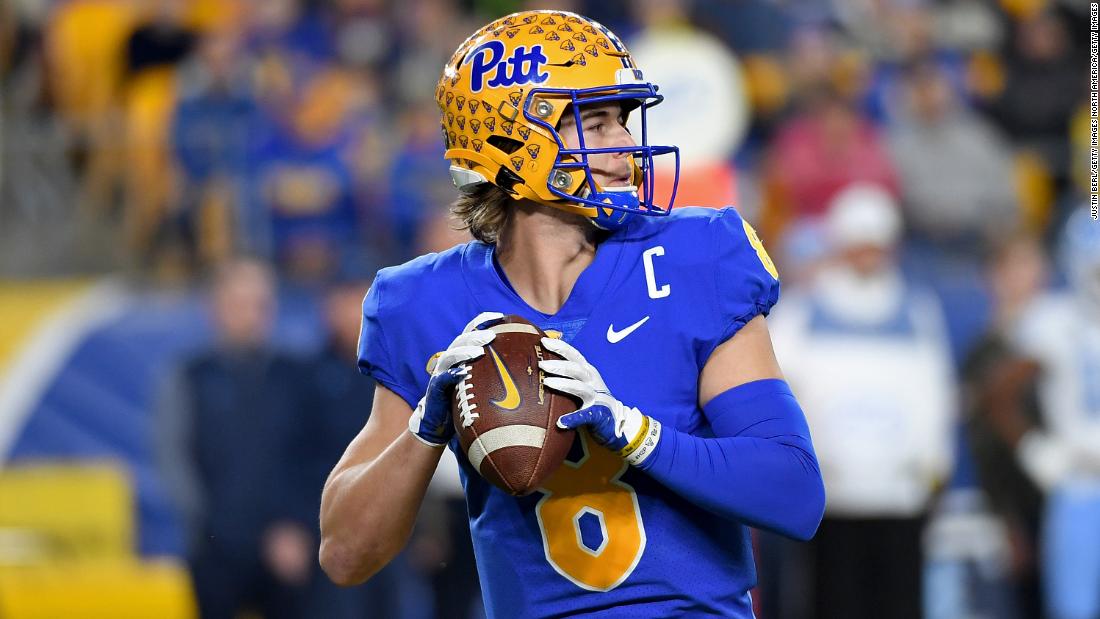 University of Pittsburgh quarterback Kenny Pickett, a Heisman Trophy runner-up, is tipped to be a first round pick in April’s draft.

Both NFL Network analyst Daniel Jeremiah and ESPN reported that his right hand — his throwing hand — measured at 8 ½ inches.

According to NFL.com, that would make it smaller than any other starting NFL QB in the league in 2021.

The size of a quarterback’s throwing hand is important because having a smaller hand makes it harder to grip the ball, therefore making it more difficult to play the position — especially in adverse weather conditions.

Pickett’s hand size doesn’t seem to have hampered him too much as of yet, as the 23-year-old completed 67.2% of his passes for 4,319 yards and a 42-7 touchdown-to-interception ratio en route to winning the ACC title.

His hand measurement has been a hot topic of discussions leading up to the combine, after he didn’t have them measured at the Senior Bowl a few weeks ago.

“Whatever it measures, it measures,” Pickett said at the NFL Scouting Combine. “I’m sure that won’t be the end of it, but that’ll be the last measurement I’m sure I’ll take of it.”

But while people were debating the minutiae of hand sizes, a random act of kindness also grabbed the headlines.

Liberty Eagles quarterback Malik Willis was caught on camera talking to someone sitting on a milk crate outside Lucas Oil Stadium before reaching into his suitcase and giving them some clothes.

Willis later explained his actions to NFL Network, saying: “I walked past her on the way to the Nike suite, chopped it up with them and I walked out with a suitcase or what not, and I felt bad because I’ve seen her son, it was a pregnant lady and she was homeless.

“And I was just like: ‘Shoot, I haven’t got any money, but I can give you a couple shirts and that type stuff.’ So I just felt like I had to do that. I mean I’m in at a position right now where I’m not worried about much of anything besides getting better, so if I can help her out in any way, I feel like I should.”

There was talk that the 40-yard dash combine record could possibly be broken with some fast times being clocked.

Ohio State’s Chris Olave started the excitement off when he clocked an unofficial time of 4.26.

Shortly after, Baylor wide-out Tyquan Thornton appeared to break John Ross’ record of 4.22 seconds when he clocked a time of 4.21 seconds.

However, when the NFL later posted the official times from the combine, Thornton came in at 4.28.

Giants wide receiver Ross weighed in on nearly having his record broken: “Y’all crazy to think I’d be mad over him breaking it I’m happy for bro lol honestly that’s (fire emoji) fr!!”