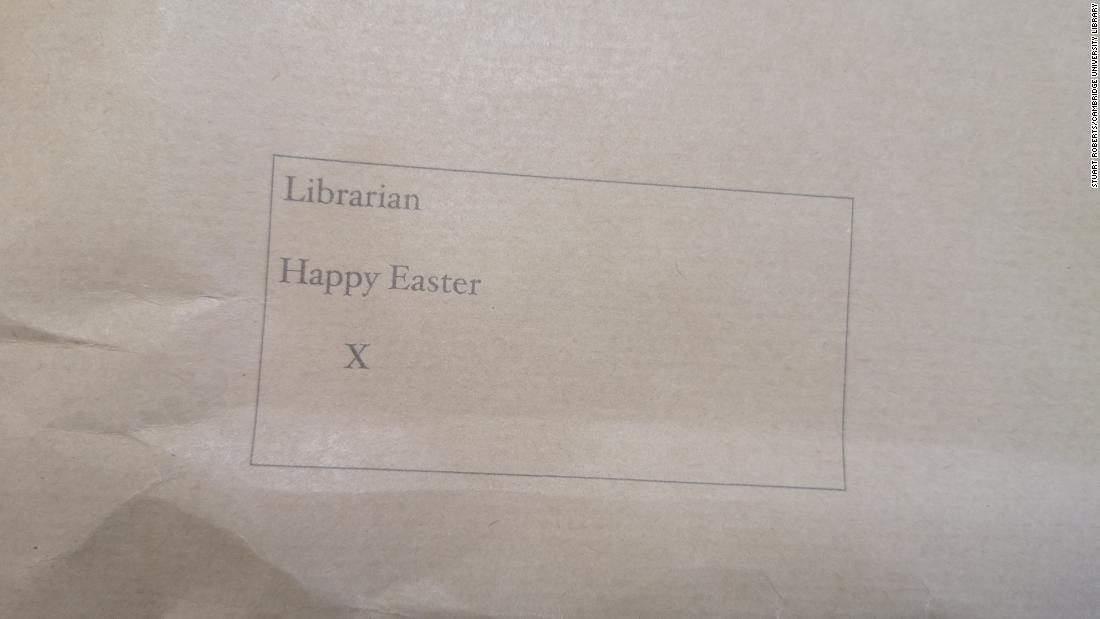 A set of rare notebooks filled with notes by Charles Darwin have been anonymously returned to the University of Cambridge, over 20 years after they were initially reported missing.

The two notebooks — one of which includes Darwin’s famous 1837 “Tree of Life” sketch — were returned to Cambridge University’s Library in March 2022, the university said in a statement.

They were left outside the librarian’s office and wrapped in plastic, inside a pink gift bag with a brown envelope containing the notebooks’ archive box, and an unsigned printed note.

The notebooks were returned with this note. Credit: Stuart Roberts/Cambridge University Library

The precious items, which the university believes could be worth “millions,” were discovered missing during a routine check in January 2001, when it was revealed that the small box containing the notebooks had not been returned to its correct place in the university’s special collections strong rooms.
Following an “exhaustive” search spanning years, the university officially declared the notebooks missing — and likely stolen — in November 2020.

At the time, the university issued a global call-out to help find the books.

One of the two notebooks owned by Charles Darwin. Both books were anonymously returned in March 2022. Credit: Stuart Roberts/Cambridge University Library

“My sense of relief at the notebooks’ safe return is profound and almost impossible to adequately express. Along with so many others all across the world, I was heartbroken to learn of their loss and my joy at their return is immense,” Dr. Jessica Gardner, a Cambridge University librarian, said in a statement announcing the return of the notebooks.

“They may be tiny, just the size of postcards, but the notebooks’ impact on the history of science, and their importance to our world-class collections here, cannot be overstated.”

“I am incredibly glad to hear of the notebooks’ safe return to their rightful home,” Professor Stephen J Toope, the Cambridge University vice chancellor, said in a statement announcing the return of the notebooks.

Cambridgeshire Police’s investigation of the notebook’s disappearance and return is ongoing, the statement added.

Darwin used the idea of the tree of life to contextualize the theory of evolution, and show how all species on Earth are related and evolved from a shared ancestor, according to London’s Natural History Museum.
His first “Tree of Life” sketch was drawn in the summer of 1837, a year after he returned to England from his worldwide voyage on the HMS Beagle. Over two decades later, Darwin would go on to publish the most seminal book of his career, “On the Origin of Species,” where he expanded his ideas on evolution.