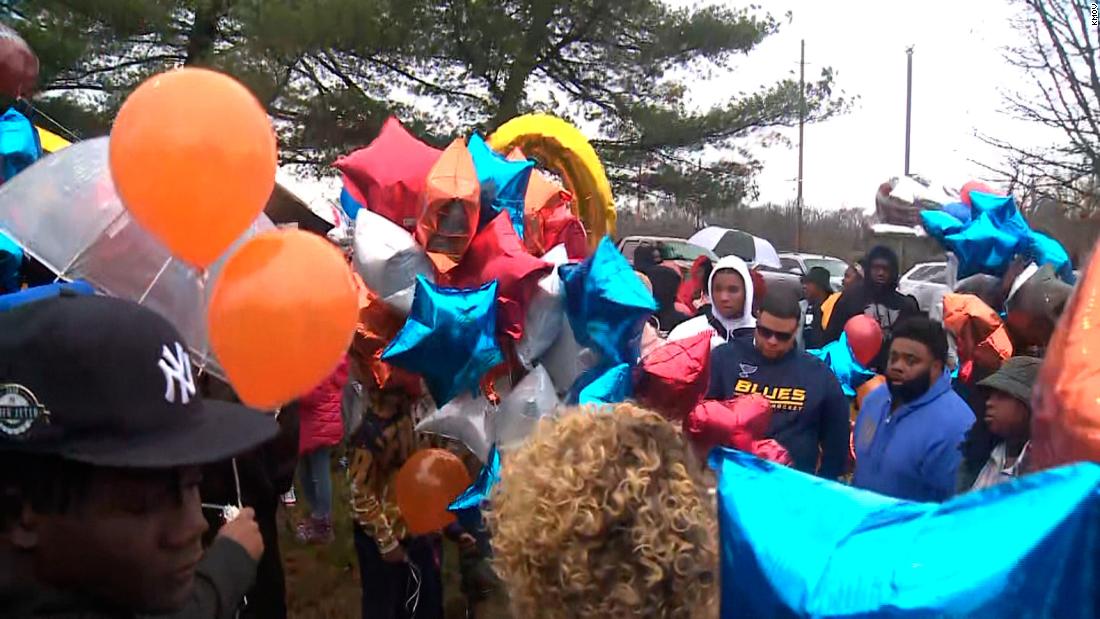 That’s how friends and family in a Missouri vigil remembered 14-year-old Tyre Sampson, who died last Thursday when he fell off an amusement park thrill ride while on a spring break trip to Orlando, Florida.
“He was fun, he was a good dude,” Kameron Smith, who said he played football with Tyre, told CNN affiliate KMOV. “He helped me when I was in practice, when I would do something wrong, he’d help me with it and try to fix it and then when I’d mess up he’d try to encourage me.”

Tyre attended middle school in the St. Louis area but was practicing at his future high school across the river with Gregory and his players at East Saint Louis High School in East St. Louis, Illinois.

Smith’s mother, Victoria, also took notice of Sampson, who she said was always respectful and well mannered and that, despite his tall stature, “you had to lean in to hear him cause he talked so softly.”

“He had a great future ahead of him, he was so amazing, so respectful,” she added. “He was the first one to support my son when he’d get done with a practice or a drill or something like that, so I was thankful.”

Dozens of people attended the vigil under a gloomy sky Thursday evening in a park in Ferguson, Missouri, and released colorful balloons into the sky in Tyre’s honor.

“You can see the influence, at age 14, that this young man had,” Damon Cotton, who said he was a cousin of the teen, told CNN affiliate KSDK. “He truly had the support of the community all over this area.”

Tyre died after falling from the FreeFall drop tower ride at Orlando’s ICON Park. The FreeFall takes riders to the top of a 430-foot tower and falls at speeds of up to 75 mph, the park’s website says.

Following the teen’s death, the park demanded that the Slingshot Group, the owner of the ride, suspend the FreeFall and the Orlando Slingshot, a second ride, “until the attractions are proven to be safe by authorities.”

The Slingshot Group CEO, Ritchie Armstrong, said in a statement the company suspended the operations of the two rides at ICON Park and was “fully cooperating with the authorities at the state and local levels who are investigating this tragic incident.”

“We plan on providing additional information in the coming days, as we learn more,” Armstrong said.

Late last week, attorneys Ben Crump and Bob Hilliard announced they had been hired separately by the teen’s parents and asked anyone who was on the ride at the time or witnessed the incident to contact them.

“This young man was the kind of son every parent hopes for — an honor roll student, an aspiring athlete, and a kind-hearted person who cared about others,” Crump, who was hired by Tyre’s father, said in a statement. “A fun theme park visit with his football team should not have ended in tragedy.”

Yarnell Sampson, the father, called the incident a “freak situation” and said in an interview that he would have given anything to give his son the chance to live out his dreams: to play professional football.