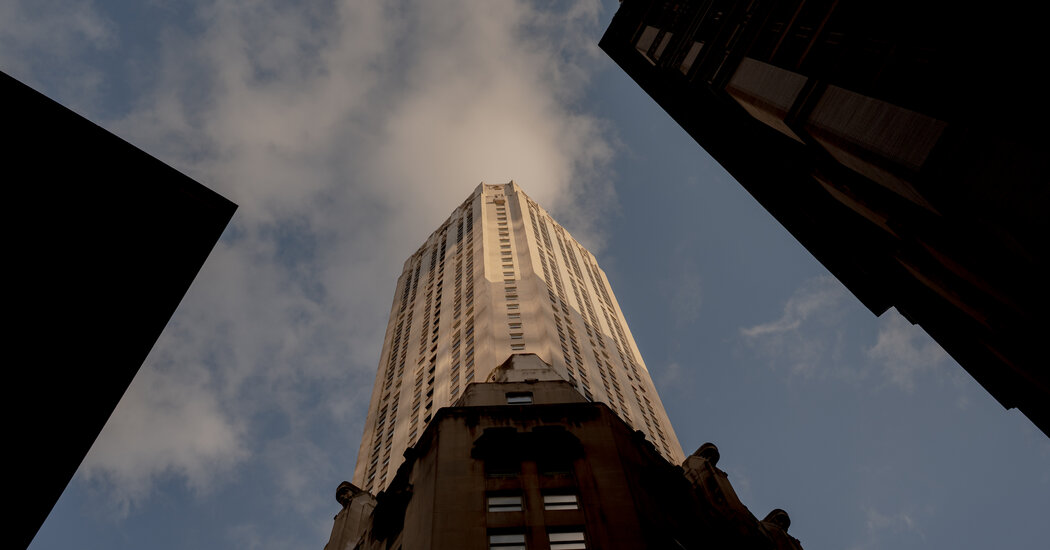 When it was built in 1931, the City Bank-Farmers Trust Company Building towered over the financial district as one of the tallest buildings in New York City. It was, in fact, the tallest with a stone-clad facade, which featured 14 Assyrian-style busts, called “giants of finance,” watching over the narrow streets from their perch on the 19th floor. Replicas of coins from around the world adorned the entrance, representing countries where National City Bank — which would later become Citibank — had branches.

The 59-story building, at 20 Exchange Place, is now a bustling residential high-rise with more than 750 apartments, featuring luxury amenities, stunning harbor views and some rent-stabilized units. Tenants breeze into the lobby, with its soaring ceilings and elaborate marble mosaics, and into Art Deco-style elevators to reach their homes.

Or they used to, anyway.

Since November, the skyscraper has been plagued by long elevator outages that have turned daily life upside down and trapped residents with mobility issues inside their apartments. Elevator service is unpredictable and often nonexistent, for hours at a time, above the 15th floor. The elevators that service the lower floors have continued to work, even as the outages have grown more frequent in the last two months.

In interviews and emails, more than a dozen residents told The New York Times about living in what one of them described as “high-rise hell,” and about how they have reorganized their lives as a result. They have canceled plans, missed appointments, been late for work, ditched heavy strollers, contemplated moving. (But how do you move out of a high-rise without a reliable elevator?)

“Our lives completely changed the moment these elevators stopped working,” said Faisal Al Mutar, 30, who lives in a studio on the 22nd floor.

Those who are able have climbed many, many stairs. One young software engineer, in fact, has gotten so used to the hike that he signed up for the 102-story Tunnels to Towers charity climb at One World Trade Center in June.

Erin Campbell, a 28-year-old nurse, was excited to find a “Covid deal” for a two-year lease for an apartment with water views on the 48th floor a little over a year ago. Then the elevators started breaking down, leaving her stranded after long shifts on her feet.

“I’m a nurse, I have no choice: I have to go to work,” she said, recounting how often she returns home only to learn that the elevators are out. After a recent 12-hour shift, she came home at 8:30 p.m. and was told by doormen that service to her floor would probably not be restored until about 11 p.m.

“I just started crying,” she recalled. “I’m a young, in-shape person, so I can do it. But it’s miserable.”

Her greater concern, she said, is for her neighbors who are unable to trek up so many flights — as well as the possibility that residents could face delays receiving medical attention in case of an emergency, she said.

The building’s owners, DTH Capital, say that Con Edison must step in to resolve the problems, which they maintain are likely related to electrical surges from Con Edison equipment. The owners say they have hired teams with elevator, electrical and engineering expertise to get to the bottom of the problem.

“These experts have so far been unable to determine the source of the surges and believe that we will not be able to do so without the full collaboration and 24/7 support of Con Edison,” DTH Capital said in a statement.

Con Edison, in turn, says it has conducted extensive testing at the building and found “no indication that our power supply is deficient or compromised.”

“To date, we have not been presented with any plausible theory as to why the elevator problems, which have developed since work to install a new elevator system began, are related to Con Edison equipment or service,” the electric company said in a statement.

Con Edison added that it had hired a nonprofit called the Electric Power Research Institute to assist in its investigation.

The building’s owners say that the elevator’s operating boards are routinely burned out and must be replaced often and that they have hired elevator mechanics to be on-site 24 hours a day to expedite repairs. They have also tried to buy operating boards in bulk but have been stymied by supply-chain issues, they said.

Rose Associates, a property management company, is taking over management of the building after residents complained about how the previous management group, First Service Residential, had handled the elevator issue.

The 311 call system lists dozens of complaints about the building’s elevators.

The owners say that they have offered some tenants hotel rooms and furnished apartments on lower floors and in another building in the neighborhood, and that rent concessions are forthcoming. Tenants have also been allowed to break their leases, and the building has hired couriers to deliver packages up flights of stairs and offered laundry service.

Local elected officials have stepped in to try to mediate. In a joint statement, State Senator Brian Kavanagh, Assemblywoman Yuh-Line Niou and Councilman Christopher Marte said they had been working with Con Edison, the building and city agencies to resolve the issue and help residents. They were planning a news conference with residents outside the building on Monday.

Mr. Marte said his office had been contacted by more than 100 residents, some of whom were concerned they would face retaliation if they contacted the management company directly. He described the situation at 20 Exchange Place as “disturbing and ridiculous.”

Some residents interviewed requested that their names be withheld because they also feared retaliation or did not want to jeopardize their chances of receiving a rent concession. The building has also asked some residents to sign nondisclosure agreements.

Sara Irvine, 31, lives on the 43rd floor and said arthritis had prevented her from using the stairs. For a while, she behaved during the outages as she did in the early stages of the pandemic, going out only to make trips for two weeks’ worth of groceries, or making do with what she had at home.

“There were some nights where there was no way to get dinner,” Ms. Irvine said. “I would just eat crackers or something.”

She and some other residents also said they had experienced sudden jolts during elevator rides. In one instance, the elevator shuddered to a stop and then began descending too quickly, Ms. Irvine said. The building’s owners said in response that the elevator’s “safety stop” kicks in when a surge or dip in voltage occurs and can be abrupt and cause a perceived drop.

Ms. Irvine took the offer to stay in a nearby hotel this month but said that coordination has been spotty, with her stays often extended at the very last minute. The situation is all the more frustrating, she said, because she does have a stable home that she pays for — but no reliable way of entering or leaving it. And she hates that she has become accustomed to the daily uncertainty.

Gina Chen, 30, who lives on the 22nd floor, had thought of the elevator issue as a simple nuisance — until she fractured her foot a couple of weeks ago.

“It’s a privilege that we are able to afford to live here, but we did not sign up to live in gilded cages,” Ms. Chen said. “And coming off the heels of two years of a pandemic situation where we felt trapped, it all feels so much more acute.”