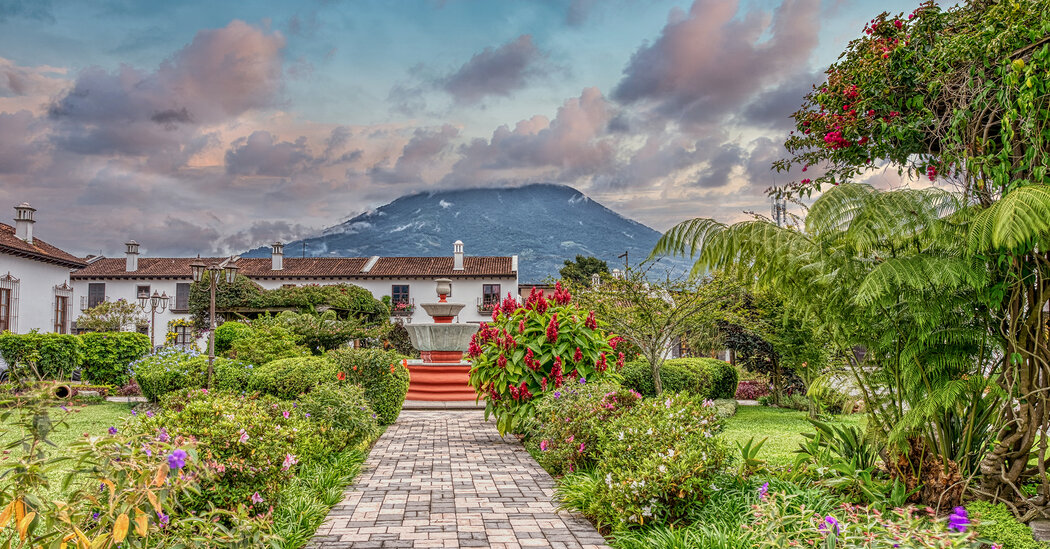 A Two-Bedroom Townhouse in Antigua, Guatemala

This two-bedroom townhouse sits in a gated community on the outskirts of Antigua, the colonial city and UNESCO Heritage Site surrounded by volcanoes in the highlands of central Guatemala, about 25 miles west of Guatemala City.

“It’s close to Antigua, but not in the hustle and bustle of the commercial areas,” said Glenn Wilson, an agent with Century 21 Antigua Fine Homes, which has the listing. The 39-home development is laid out as “a big square, and in the middle of the square there’s a park with benches, gardens.” From various places on the grounds, he said, residents can eye the dormant Agua volcano.

Built circa 2010, the 1,991-square-foot cinder-block home is accessed through its one-car garage. Mr. Wilson said that sometimes in gated communities in Antigua, the garage isn’t used for cars, which are parked just outside instead. These repurposed garages create extra space for storage, or for a family or sitting room or, in others cases, a bedroom. “I’ve seen all kinds of uses for it,” he said.

“Because it’s a corner house, there’s a lot of windows,” Mr. Wilson said, “so you have nice, natural light coming in.” The great room’s handmade fireplace, with a hefty wraparound wood mantel, is “more than enough” to heat the residence in the winter, he said, and air-conditioning is unnecessary given the region’s mild climate. The home conforms to modern earthquake-safety building codes.

A bedroom near the entrance has an en suite bathroom. From the living room, ornately tiled steps ascend to the main bedroom, which is lofted. With a walk-in closet, an en suite bath and access to a small private terrace, the bedroom is a sanctuary despite being partially open to the ground-floor space below.

The city of Antigua, with about 50,000 residents, is renowned for its colonial architecture and religious monuments, most notably the 17th-century Santa Catalina Arch, as well for the volcanoes on its horizon. Restaurants and shopping are within walking distance from this property, while Antigua’s Central Park is a 30-minute walk or a 10-minute drive. Guatemala City and La Aurora International Airport are 25 miles east, though the drive takes about an hour.

Guatemala does not have a centralized multiple listing service, making it difficult to track price trends, agents said. Mr. Wilson said that demand for homes in Antigua — a tourist and retirement destination for Guatemalans and foreigners alike — picked up last year, fueled largely by buyers able to work remotely.

“‘How’s the internet?’ That seems to be the biggest question. ‘Is it strong enough for me to work?’ And it is,” Mr. Wilson said. As a result, he has found the real estate market in early 2022 to be “more active” than it’s been in years, estimating that prices are 10 to 15 percent higher than they were before the pandemic.

Not every local broker is seeing the same trends. Rolando León, the general manager of Nova Antigua Real Estate, characterized Antigua as a buyers’ market, with weakened demand and abundant supply owing to market uncertainty.

“Nobody is trying to make lifetime decisions like spending $500,000 if they don’t know what’s going to happen with the economy and the pandemic,” Mr. León said. With fewer buyers currently on the hunt, sellers have become “more flexible” on prices, he said, though overall sales activity has held steady.

Pedro Ramírez Fait, the president of Guatemala’s Chamber of Real Estate Brokers, said the country’s housing market performed very well in 2021, and especially in the last six months. After a temporary slowdown in sales because of pandemic-related restrictions and lockdowns, the market picked up with the same vigor as before the pandemic, he said. (Guatemala’s government is currently requiring proof of vaccination and a recent negative Covid-19 test for entry into the country.)

Guatemala’s economic recovery since the pandemic, including its projected 5.1 percent GDP growth in 2021 and the stability of the Guatemalan quetzal with respect to the dollar, gives “confidence and hope” to investors, Mr. Ramírez Fait said.

Although Guatemala has long struggled with violent crime, particularly in Guatemala City, and political corruption — including allegations of bribery facing its current president — Mr. Ramírez Fait said the perception of Guatemala as unsafe is perpetuated by the media. “It’s different from the reality,” he said. “People come to Guatemala and they have no safety issues,” he said, adding that the country has worked for decades to improve its safety.

Prices in Antigua are higher in the city center and lower on the periphery. Mr. Wilson said a centrally located three-bedroom house might cost $300,000 to $600,000, depending on quality and location. Most buyers want to spend less than $500,000.

At the high end of the market is an exclusive gated community in the city center, Jacarandas de Antigua, where 4,800-square-foot lots sell for an average of $550,000 and home prices average $1 million. A second phase, with lots to be priced at less than $260,000, is underway, Mr. León said.

Mr. Wilson and Mr. León said buyers who are priced out of the center are increasingly looking to its southern suburbs. “Most of the large coffee plantations are located there, and eventually these are sold for new real estate developments,” Mr. León said. “The cost of land is increasing so fast that coffee growers tend to sell for good money in order to buy more land out of the cities.”

Who Buys in Antigua

The majority of buyers in Antigua are second-home buyers or retirees from other parts of the country, Mr. Wilson said.

International buyers typically come from the United States (many have a direct tie to Guatemala), followed by Europe (particularly Spain) and Canada.

“We’re seeing a bit of a miniboom right now from people that went to the U.S. when they were younger, have been successful, and now they’re planning their retirement,” Mr. Wilson said.

Mr. León said about 60 percent of buyers in Antigua are Guatemalan and the rest are foreign. The mix was “different a few years ago, when foreigners were buying most of the homes,” he added. “One of the main reasons for this is that local banks offer less restrictions to Guatemalans, as opposed to foreigners, who usually end up paying cash.”

Foreigners are not restricted from buying real estate in Guatemala, Mr. Ramírez Fait said, though they cannot own property next to bodies of water, such as seas or lakes.

Mr. Wilson said that because the industry is unregulated, and agents are not licensed, it’s important for buyers to hire an ethical agent with at least five years’ experience. He suggested vetting agents with three questions: “How long have you been in business? How many homes have you sold? What’s your experience?”

Buyers often hire an attorney, whose fees are typically between $1,000 and $2,000, Mr. León said. The purchase tax, paid by the buyer, is between 3 and 12 percent of the property’s registration value, depending on whether the property is new or secondhand.

In 2021, the annual property tax on this home was approximately $200, and it will increase for a new owner, Mr. Wilson said. The monthly condo fee of around $150 (1,200 Guatemalan quetzales) includes security, landscaping, lighting and maintenance of common areas.