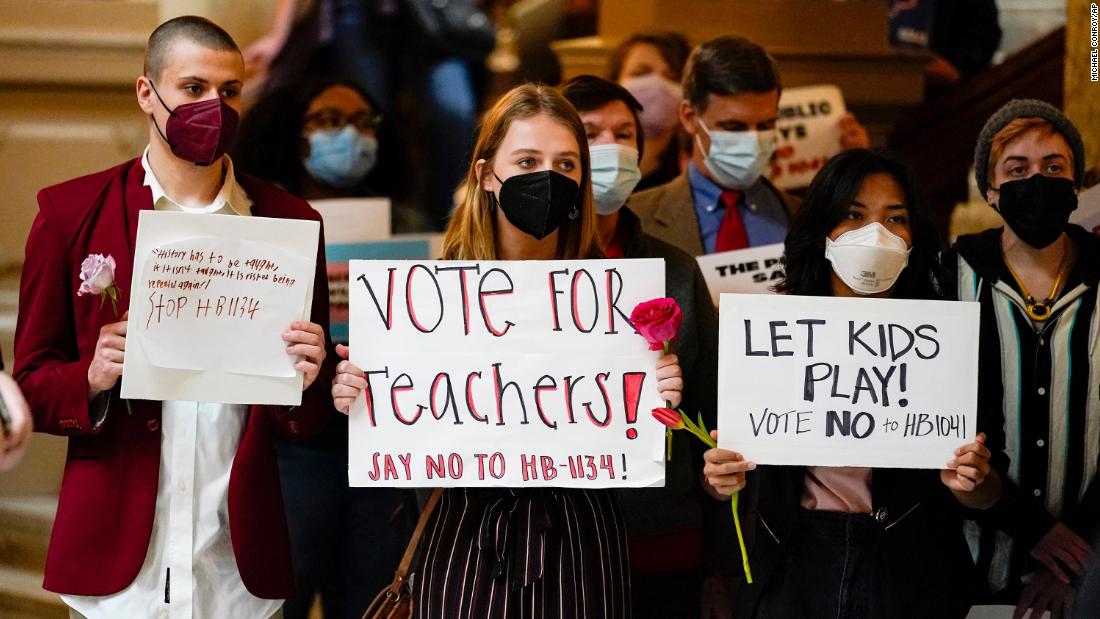 “Within 36 hours, we had organized over a dozen community members and partners to testify against the bill,” Jennifer Smith-Margraf, the vice president of the Indiana State Teachers Association, told CNN in March.

Members of the Indiana community spoke at hearings, met with legislators and posted on social media to speak out against Sen. Scott Baldwin‘s support of Senate Bill 167.
The bill was later pulled from the education committee’s schedule in the Senate, however, its successor — House Bill 1134 — created even more of an uproar, not just among Indiana educators, but among a wide range of interest groups in the state.

Supporters said the bill would give parents more say on what their children learn in school, but critics saw it as censorship.

The Indiana bill caught the attention of a diverse group of educators, business owners, parents and community leaders from across the state, and that coalition successfully defeated it in February. However, more than a dozen other red states have passed similar legislation.

Since January 2021, 42 states have introduced bills or taken other steps that would restrict teaching critical race theory or limit how teachers can discuss racism and sexism, according to an Education Week analysis.

Across the country, Republican lawmakers are pushing legislation banning CRT in public schools even though it is not taught in K-12. CRT is an academic concept that is usually offered in graduate-level courses, but in the past year, it has been conflated with diversity and inclusion efforts as well as with debates on how to teach race and history.

Last month, Mississippi’s Republican Gov. Tate Reeves signed into law a bill described as a prohibition on CRT. Senate Bill 2113 prohibits teaching “that any sex, race, ethnicity, religion or national origin is inherently superior or inferior” in public schools. Mississippi became the 15th state to pass legislation limiting how teachers can discuss racism and sexism. The bill does not explicitly mention CRT in its language, but Gov. Reeves said in a statement that CRT was a threat to public school education which inspired him to sign the bill.
And in South Dakota, Gov. Kristi Noem recently signed legislation banning the state’s public universities from using training and orientation materials that could cause racially based “discomfort.”

Indiana public policy adviser Marshawn Wolley said the coalition to fight HB 1134 was unlike anything Indiana had seen before.

The coalition represented a variety of views. Wolley, who is a parent, told CNN that he could not imagine letting his son go through a system “where teaching is impartial.”

Although the bill did not explicitly mention CRT, Wolley said it attacked the principle of teaching about race in the classroom.

Nationwide, Black parents have said that their voices and the concerns of their children have been lost in the partisan debate about CRT. So the Indianapolis Urban League, the Indy Black Expo, and African American Coalition of Indianapolis helped devise strategies to bring Black parents to the Senate floor during the hearing.
Indiana teachers were also on the offensive. Margraf said teachers, having fought lawmakers on other policies, knew what they had to do to advocate against the bill.

“We had been building relationships with legislators before that … now all of sudden (they’re) attacking us about everything we do and everything we believe in,” she said.

As an Indiana high school teacher, Margraf said she believes in teaching the truth to her students. She said the bill would have created a barrier for her to do her job as an educator if she was not allowed to teach important concepts on race, sex, ethnicity and religion.

The Indiana business community shared a similar concern, Taylor Hughes, the Indy Chamber’s director of strategy, policy and special projects, told CNN. He and other business leaders also spoke out at the legislative hearing.

“It was to respond to an issue that isn’t real because we know CRT is not taught in school, but if you create a chilling effect of teachers not teaching the truth … it’s gonna harm us now and in the future.”

Hughes said the bill had the potential to disrupt “future talent” in the Indiana workforce. He mentioned the bill disrupted teaching about diversity, equity and inclusion to young people, a lesson he said is important in the workforce.

Last month, the bill was shut down in the Senate after the coalition’s work.

“We could not be prouder of everyone stepping up and working together and standing up for our children,” Margraf said.

Wolley said he expects more bills to appear soon, but he believes the coalition and others like it can use their power to defeat these bills. He said building coalitions is an important part of shutting down more anti-CRT legislation.