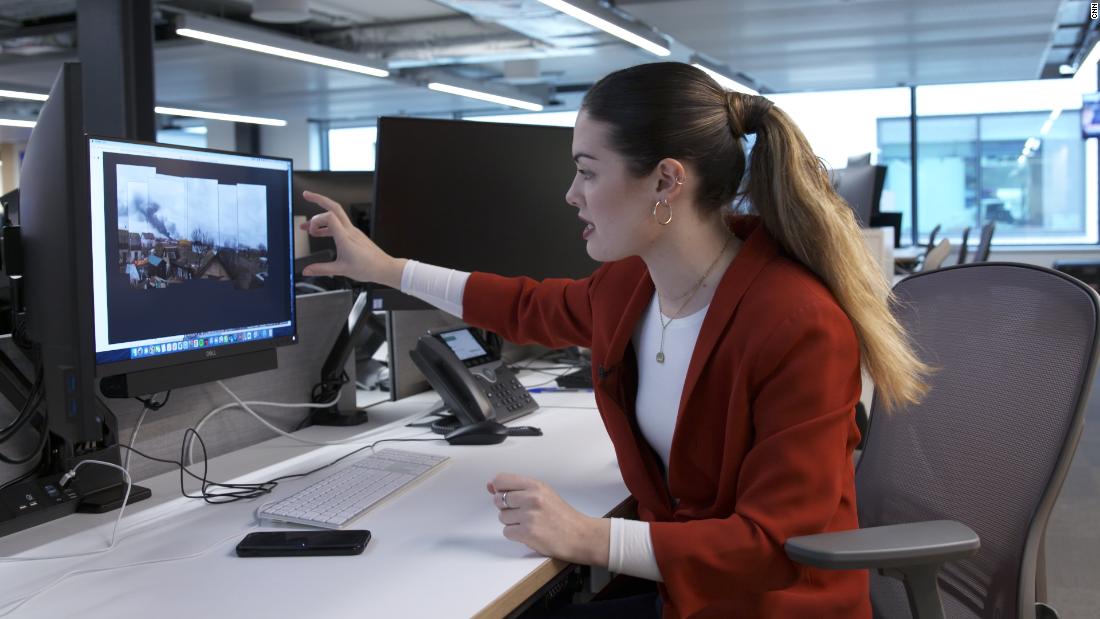 But making sure the videos and images are real, accurate and correctly labeled is crucial amid a misinformation campaign that surrounds Russia’s offensive in Ukraine.

CNN’s investigative team has been monitoring the constant stream of information from social media by using several tools to filter through the noise and select relevant videos for our coverage to geolocate and verify.

Using Twitter lists of local video aggregators, influencers and experts from the Open-Source Intelligence Community (OSINT), as well as following key accounts on Telegram and TikTok, are the first steps to making sure we are always up to date with everything coming from the offensive.

In the first few days of the Russian invasion, the situation was hectic and multi-fronted, so geolocating footage turned out to be key to report accurately on surprise attacks.

On February 24, a video started circulating on social media of helicopters flying suspiciously amid a large black plume of smoke billowing up to the sky.

Some posts included the reported location as near the Hostomel airfield, some 25 kilometers from Kyiv.

At the time this video first started circulating on social media, it was not yet confirmed the Russians were anywhere near Kyiv, so it became urgent to try and verify this footage.

Finding where social media videos were originally posted is quite important to understand context and help eliminate old videos. If the video was first shared on Telegram, for example, it would retain the metadata unlike most social media platforms, giving us crucial information about the time and place it was recorded.

The first step is to make sure the video is not an old one, so it is good practice to do a reverse image search on Google of key timecodes of the footage.

Another good tip to confirm the authenticity of the video is checking if the weather in the video fits with the weather reported by forecasts, and we can do that by checking on websites such as Wolfram Alpha or our in-house team at CNN Weather.

In this case, nothing suspicious came up on search engines or weather, which allowed us to go to the next step: analyze visual clues in the video.

If the footage had any distinctive features such as a church or a monument, it would be possible to crop out the image and do another search on Google to find the location.

Or, as in this case, the distinctive feature is a yellow building — a factory of some sort with a smaller rooftop structure on top. In the foreground were two white houses and a large flat gray building to the right, along with a blue low flat building.

Looking on Google Earth, there was only one option where this arrangement was possible, not far from Hostomel airport.

We built a panorama using screengrabs from the video and used colored shapes to match identical buildings.

It’s important to consider the date these images were recorded in case there are new additions to the area. And if there are up-to-date satellite images of the area, even better.

NASA’s active-fire data also provides data about areas that were hit by a fire.

After geolocating the footage, Ukrainian authorities confirmed they downed a helicopter at Hostomel.

We sent the geolocated footage to CNN’s Matthew Chance who was based nearby and immediately traveled to Hostomel airport.

Once there, he witnessed this extraordinary moment.