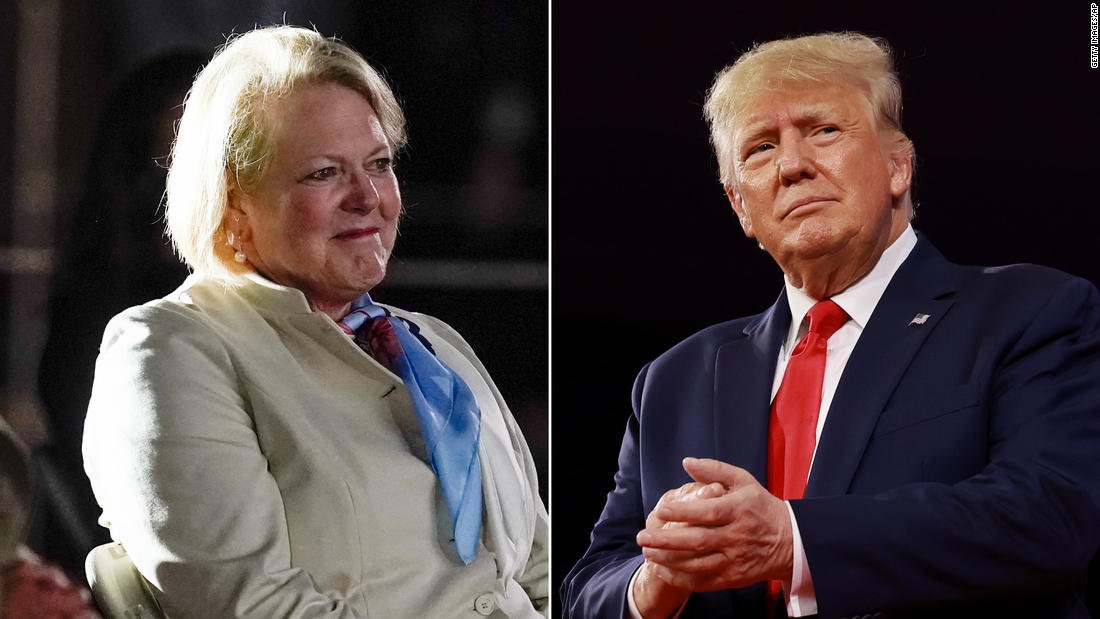 She used her face time with Trump to cajole him about her floundering efforts to install friends and allies into plum administration positions, two former senior White House officials told CNN, one of whom said Trump encouraged her to get in touch with his staff about the matter.

But when Ginni Thomas contacted Trump’s aides inside the Presidential Personnel Office, her requests were slow-walked, former officials said. Fearful that she might turn Trump against his own criminal justice reform bill, which she fervently opposed, they delayed granting her ask for a sit-down meeting with Trump, while the legislation made its way through Congress.

These previously unreported details are emblematic of how Ginni Thomas tried to maneuver her way into Trump’s orbit during his presidency.

Sources said Ginni Thomas leveraged existing connections to conservative figures and sought inroads with Trump staffers, to become a recurring presence at his White House. She became part of a larger group of Republican activists who met in the White House on a near-monthly basis, though not with Trump, a source told CNN. Along the way, sources said she became a persistent nuisance to some of the Trump aides tasked with managing her entreaties.

Already a firm believer that hostile “deep state” forces had infiltrated the Trump administration, Ginni Thomas later embraced even more militant conspiracies about the 2020 election being stolen, raising a flurry of ethical red flags for her husband on the Supreme Court, who has already ruled on one January 6-related case and is facing pressure to recuse himself from future cases.
This dynamic reached a new level last month, when it became public that Ginni Thomas texted with her longtime friend Mark Meadows after the 2020 election about overturning the results. The trajectory of Meadows’ career, from House backbencher to Trump’s final chief of staff, had given her foothold in the Trump White House. Their eye-popping texts, which were obtained by the House select committee investigating January 6, show how she cheered on a coup attempt and held out hope that Democratic officials would be jailed at Guantanamo Bay. Meadows has declined to comment to CNN on the text messages.

“Help This Great President stand firm, Mark!!!” Thomas texted Meadows on November 10, 2020, three days after the election was called in favor of President-elect Joe Biden. She continued, saying, “the majority knows Biden and the Left is attempting the greatest Heist of our History.”

This story is based on interviews with 14 sources familiar with Ginni Thomas, her dealings with the Trump White House and her relationship with Justice Thomas. They spoke on the condition of anonymity so they could candidly describe how she tried to enmesh herself within the Trump administration and how her efforts culminated with an embrace of fringe election conspiracies.

Ginni Thomas did not comment for this story. Ginni Thomas has denied that she or her husband ever acted improperly or crossed ethical lines. In a Free Beacon interview published last month, she said, “Clarence doesn’t discuss his work with me, and I don’t involve him in my work.”

As for their marriage, a source close to the Thomases said, “by modern standards we accept the fact that two professionals who are spouses can have distinctive and separate professional lives.” The source said they aren’t preoccupied with the day-to-day of each other’s careers, and stressed that Justice Thomas isn’t interested in politics and “doesn’t like the back and forth.”

A ‘connector’ with a rolodex

Sources described Ginni Thomas as a “connector” who used her large rolodex to build networks of like-minded activists. She has been involved with a variety of conservative organizations, including the Groundswell group, the Council for National Policy and Turning Point USA, and has decades-old relationships with leaders who span the conservative movement.

But sometimes, her networking style meant she was “getting into other people’s business,” as one former Trump administration official put it. One source close to Ginni Thomas acknowledged to CNN that her efforts at times caused others — even those who shared her hardline views — to question whether her actions were “prudent,” or if they were doing damage to the conservative movement.

One source said she was a “known quantity” within the Trump White House as someone who interacted frequently with staffers across the White House complex, from top staffers in the West Wing to public liaison officials who often sought her input on religious freedom initiatives.

“No one said, ‘yeah, we can ignore her calls.’ But on other hand, we weren’t like, ‘drop everything, Ginni is on the line,'” the source said. “I don’t know that I saw her be that effective”

She never explicitly invoked her husband in her dealings with the Trump administration, according to the sources who spoke with CNN. But it’s unlikely she would need to invoke Justice Thomas’ role on the Supreme Court, because everyone knew who he was.

In an interview with The Washington Post this week, Trump said he occasionally spoke with Ginni Thomas while in office, but claimed he didn’t know about her efforts related to the 2020 election.

“Her husband is a great justice,” Trump said. “And she’s a fine woman. And she loves our country.”

There were also occasional social invitations for the Thomases. They attended a White House state dinner in 2019 for the Australian prime minister. (Other Supreme Court justices have attended state dinners under presidents from both parties.) They were at the October 2020 swearing-in ceremony for Justice Amy Coney Barrett, where Justice Thomas administered the oath.
In 2020, Trump appointed Ginni Thomas to the Library of Congress Trust Fund Board, which handles donations to the library and some of its financial investments. A library official confirmed to CNN that she still holds the unpaid position and said the board only meets once per year.

But there were limits to Ginni Thomas’ influence in Trump’s orbit. A source said she didn’t have Trump’s personal cell phone number. She did not communicate with Trump on January 6, the source added.

Still, she exchanged at least 29 text messages with Meadows between November 2020 and mid-January 2021 — a critical period when Trump and Meadows lobbied election administrators and Justice Department officials to block President-elect Joe Biden from taking office. In some texts, she embraced fringe conspiracies and hoped top Democrats would be tried for sedition.

Pushing for hirings and firings

Multiple sources on the receiving end of such pleas recalled that several candidates who Thomas sought to install in the administration had previously failed background checks or turned down lower-level positions that they were ultimately offered. One candidate “didn’t believe women should serve in the military,” a former official recalled.

Some of the other candidates posted inappropriate things on social media, an ironic twist, considering Trump’s own social media presence was littered with controversial material.

Ginni Thomas also encouraged the Trump White House to purge specific administration officials because she suspected they were part of the anti-Trump “deep state.” Axios previously reported on Ginni Thomas’ efforts to get administration officials hired and fired, and about her group’s major role in the March 2018 ouster of former Trump national security adviser H.R. McMaster.
She brought up the proposed staffing shakeups when she accompanied Justice Thomas to a private lunch with Trump and First Lady Melania Trump at the White House in November 2018, according to multiple sources. The New York Times previously reported on the meal, but not about the topics that were discussed.

Sources told CNN that during the lunch, Ginni Thomas told Trump that she knew about several candidates for administration jobs, and Trump asked her to follow up with his staff.

In the ensuing weeks, Ginni Tomas tried to secure a follow-up meeting with Trump. But some White House aides slow-walked her requests because they were afraid she might undermine Trump’s signature criminal justice reform bill, and because of their concerns about her personnel recommendations, people familiar with those efforts told CNN.
Trump signed the First Step Act into law on December 21, 2018. Weeks later, Ginni Thomas and members of her right-wing Groundswell group — including a congressional chief of staff and an anti-transgender activist — met with Trump in the Roosevelt Room at the White House. Ivanka Trump was also present for parts of the meeting, according to The New York Times.

During the meeting, Thomas complained that hostile “deep state” officials within the White House were blocking her recommended candidates from getting jobs in the administration. She aimed some her of complaints directly at Trump aides who were in the room, accusing them of quashing her efforts to install MAGA devotees inside agency posts and the White House, according to two people who were present for the meeting.

She even gave Trump her list of recommended hires during the meeting, a source told CNN.

Top aides had briefed Trump before his meeting with Thomas and informed him that there were problems with the candidate she was pushing, former Trump White House officials revealed to CNN for the first time. One of the former officials said they were afraid that Trump would have been easily persuaded by Ginni Thomas’ suggestions if they hadn’t briefed him beforehand.

Controversy for the high court

The firestorm over Ginni Thomas’ role in the efforts to overturn the 2020 election has once again raised questions about Justice Thomas’ complicated position on the Supreme Court, and whether he should recuse himself from any January 6-related cases that might come up. But public pressure can only go so far. All decisions regarding recusal are solely up to each justice.

A native Nebraskan, Ginni Thomas worked for Omaha-based former GOP Rep. Hal Daub in the 1980s, shortly before she met Justice Thomas. Daub stayed friends with the high-profile couple and told CNN that he believes it’s “preposterous” to accuse them of acting unethically.

“They understand the relationship with the government and the (Supreme) Court,” Daub said. “He respects her right to her own voice. And he has been assiduous to avoid accusations of impropriety… as one of nine Supreme Court judges, he has a duty to serve and not recuse.”

Daub added that he believes Justice Thomas has maintained a consistent legal philosophy on the bench, in majority opinions and dissents, on a wide array of politically charged matters.