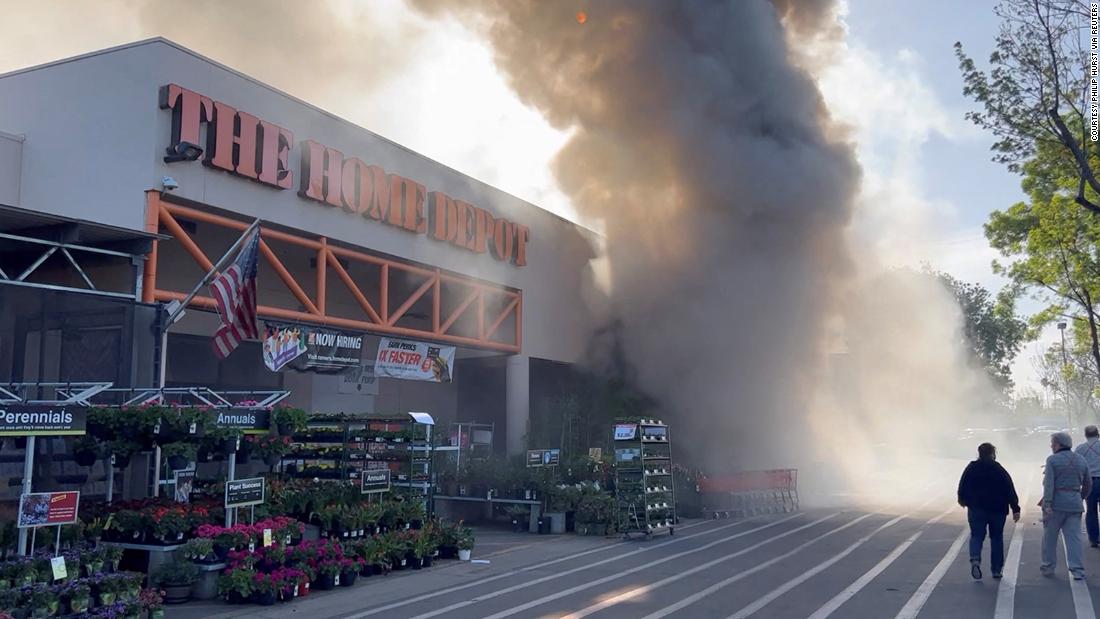 Authorities first responded to the five-alarm structure fire around 5 p.m. Saturday, CNN affiliate KGO-TV reported. During the early hours of the blaze, the heat signature was so large it could be observed from space, according to the National Weather Service (NWS).

All employees of the Home Depot were accounted for, and no injuries to either fire personnel or citizens were reported, SJFD said. A pet hospital adjacent to the blaze was evacuated.

Initially, residents living near the Home Depot were instructed by the SJFD to shelter in place due to the intense smoke.

“San Jose Fire Hazardous Incident Team members deem the air quality ‘Unhealthy’ throughout the night,” SJFD tweeted. “Air quality will be reevaluated in the morning.”
The shelter in place was lifted around 1 p.m. (4 p.m. ET) on Sunday.
Crews remained on the scene Sunday as the fire is still “smoldering and producing light smoke,” according to SJFD.
The Home Depot is “pretty much a total loss,” SJPD battalion chief Brad Cloutier told KGO-TV. “The roof is pretty much collapsed from the entire structure so it’s going to take some time to get in there if we even can — if it’s going to be safe for our people to get in there.”

Home Depot shopper Philip Hurst told CNN that he had just put his purchases in his car when he heard a commotion and saw people running out of the store.

He said he walked up to the entrance and shot video of the flames that were burning in the store.

“The fire alarm started going off and I hustled back to see what was going on. The fire alarm stopped, and I approached to get a good view just out of curiosity,” Hurst told CNN.

The sound of someone shouting “get out of the building” can be heard in the video but Hurst said people did not seem panicked as they left the store. Hurst said firefighters arrived a minute or two after he shot the video.

The cause of the fire is under investigation.