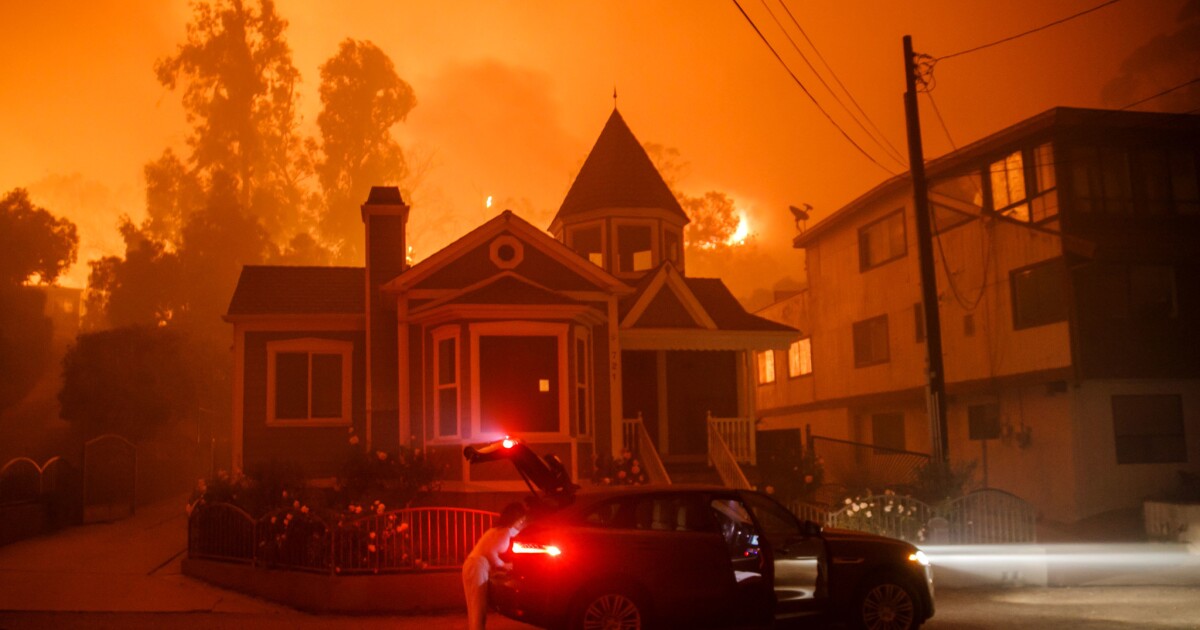 With the fire season growing longer and wildfires increasing in intensity, Californians living in fire-prone areas are having a harder time finding affordable insurance for their homes — if they can find coverage at all.

With that in mind, state officials unveiled a “Safer from Wildfires” framework this week for improving fire safety and reducing losses. The goal is not just to save lives, but also to hold down premiums and make coverage available in more areas.

The framework lays out a list of upgrades that individual homeowners should make and preventive actions that local governments and community groups should take. Rather than breaking new ground on fire safety, it draws from the best practices outlined by the consumer group United Policyholders, the Insurance Institute for Business & Homes Safety and Cal Fire, among others.

Many of the items on the list are already required for homes being sold or new homes built in neighborhoods with an elevated risk of fire. And some of the recommended upgrades are costly, albeit less so than a blaze that destroys your home.

The recommendations are the fruit of an effort started a year ago by Insurance Commissioner Ricardo Lara and several state agencies involved in firefighting and prevention.

Today, Lara said, 13 insurers with 40% of the market in the state are offering discounts to homeowners who have made fire-related safety improvements or who live in communities that have done so. His office is weighing regulations that could require more insurers to follow suit, with the new framework potentially serving as a benchmark for determining who qualifies for lower rates.

The state is also putting more money into helping communities and homeowners meet the standards laid out here.

Here are the framework’s recommendations.

There are six recommended structural upgrades to “harden” your home against wildfire risk, and specifically the risk that your house will be set ablaze by burning trees or buildings nearby or by embers blown in from a distance. Some of these carry price tags north of $10,000, while others are do-it-yourself jobs. The steps are:

Reducing risks near your home

The framework calls for three types of improvements to the property around your house, most of which include things you can do on your own. They are:

Lara noted Monday that a homeowner’s safety upgrades can be undermined by neighbors who ignore the hazards on their own properties. So community-wide efforts are crucial.

The framework lays out the following “mitigation elements” for communities to adopt:

Currently, 10 insurers are offering community-based discounts to homeowners, although they aren’t all using the same criteria. The new framework puts forward a standard that all insurers could use to judge a community’s mitigation efforts.

Where to find help

A good place to start is with your local Fire Safe Council, which you can locate on the California Fire Safe Council website. These groups draw up wildfire plans, educate local homeowners about prevention and tackle larger projects to protect their communities, such as clearing brush and creating fire breaks.

For example, the Meadows Fire Safe Council in Altadena offers to inspect properties and let homeowners know what safety improvements they should make, said the group’s spokesman, Bill Ramseyer. In addition, he said, “we will help people do the work, in terms of physically having our people come by with the chainsaws and the weed whips.”

That help, however, won’t extend to replacing someone’s roof or windows, Ramseyer said.

Amy Bach, executive director of United Policyholders, said one challenge for homeowners is the lack of funding for that sort of costly improvement to an individual property.

The California Office of Emergency Services is providing grants to local agencies to help low- and moderate-income homeowners with wildfire mitigation projects, but they’re confined at this point to pilot programs in San Diego and Shasta counties. The agency says it is aiming to take the program statewide in 2023.

In the meantime, the agency has a $100 million grant program to help vulnerable communities obtain federal aid for a variety of disaster-related purposes, including creating defensible space and retrofitting structures. As with the wildfire mitigation grants, money flows to local governments and organizations, not directly to individuals.

Some counties have taken matters into their own hands, creating funds to help homeowners directly. One example is Marin County, which approved a special tax in 2020 to fund a new county wildfire prevention authority. That group offers grants for home hardening and defensible space projects.