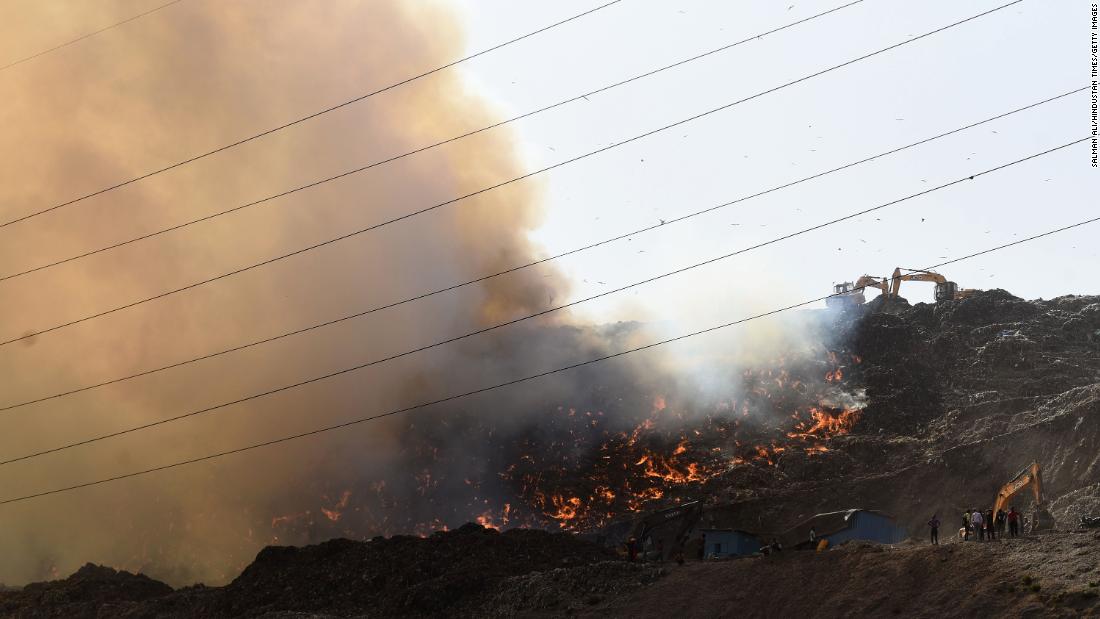 The blaze broke out Monday at the Ghazipur landfill east of New Delhi, according to the city’s fire services director, Atul Garg. The cause has not been established, but fires can be triggered by combustible gases from disintegrating garbage, he added. Temperatures in Delhi rose to nearly 40 degrees Celsius (104 degrees Fahrenheit) the day the fire broke out.

While the blaze has largely been put out, two firefighters remain on site to contain small flames and heavy smoke, Garg said. Police have opened an investigation into the cause of the fire, he added.

According to Garg, about a dozen firefighters were deployed to the scene, but containment efforts were complicated by precariously placed mounds of garbage and uneven surfaces.

“This is not a concrete floor so you can’t walk on it. You never know when you step on a hole and you fall through,” he said, adding there were no water sources nearby to douse the flames. “Waste, plastic, cloth … once it catches fire it keeps burning,” he said.

The fire broke out one week after a report by IQAir, which tracks global air quality, named New Delhi as the world’s most polluted capital. For years, the city has at times been plagued by a throat-searing, acrid haze that can lead to health problems.

Since Monday, some residents who live near the Ghazipur landfill have experienced difficulty breathing, itchy eyes and sore throats, according to local media reports.

Video and photographs of the site show the air engulfed in dense, black smoke that has blocked the sun. Thick smog cascaded across busy roads near the landfill, making it difficult to see.

There is no processing of waste in most Indian cities, according to the government’s Central Pollution Board, and in some cases, trash is simply burned in open dump yards on the roads.

Since it began operations in 1984, the 70-acre (283,280 square meter) Ghazipur landfill has grown into a staggering, towering mound of garbage, inching as high as the 73-meter (240-feet) Taj Mahal. More than two dozen fires have broken out at the site since 2019, according to New Delhi’s fire department.
One of three landfills in the area, it accepts between 1,800 to 2,000 tons of waste every day, according to a 2017 report from environmental group Climate and Clean Air Coalition (CCAC).

The Ghazipur landfill surpassed its waste capacity in 2002, and ever since, officials have been looking at options to address the issue, with environmental groups imploring the government to urgently address the unfolding crisis.