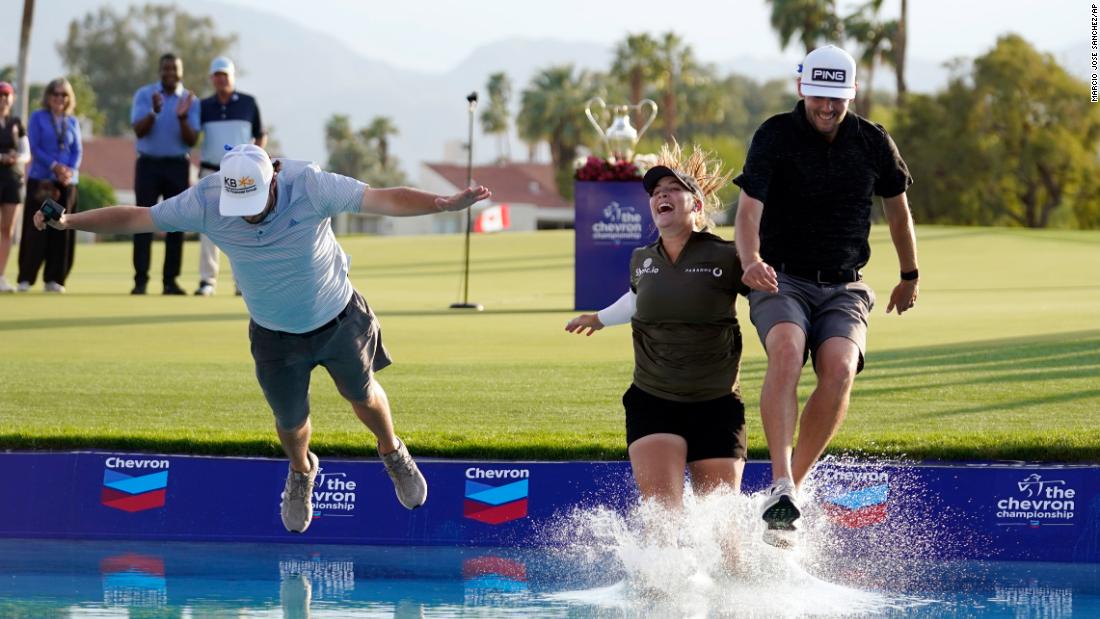 Kupcho’s victory celebrations began when she leaped into Poppie’s Pond, as is tradition, accompanied by her husband, caddy, and cheers from the crowd. The tradition was started by Amy Alcott in 1983 and has been observed by every winner since.

“It’s surreal,” Kupcho said, according to ESPN. “To be a major winner is really special and to be the last person here at Mission Hills to jump into Poppie’s Pond, it’s all really special.”

Next year, the tournament is moving from the Mission Hills Country Club to Houston under a deal with current sponsors, Chevron.

“To just be able to [win] quickly after my wedding and be able to celebrate with my husband and have him here, it’s really special,” Kupcho continued. “I didn’t see him coming across the bridge. He picked me up. I don’t think he’s ever picked me up, so that was pretty cool.”

Prior to Sunday, Kupcho’s most notable win came as an amateur, when she won the inaugural Augusta National Women’s Amateur in 2019.

Despite her relative inexperience, it was a near-complete performance from the 53rd ranked player, who had shared an early lead with Minjee Lee following the opening round.

Kupcho remained atop the leaderboard throughout the weekend and took a six-stroke lead into the last round after carding an 8-under 64 in the third round for a tournament-record 16-under 200 total.

Initially, Kupcho extended this advantage during the final round, getting birdies on the fourth and fifth holes, before playing the last 13 holes in 4-over to card a 2-over 74 final round and finish the tournament 14-under.

Fellow American Jessica Korda finished in second place on 12-under after she shot 69 on the final round, while Slovenia’s Pia Babnik closed with a 66 to finish a shot behind Korda in third. Defending champion Patty Tavatanakit tied for fourth place at 10-under.