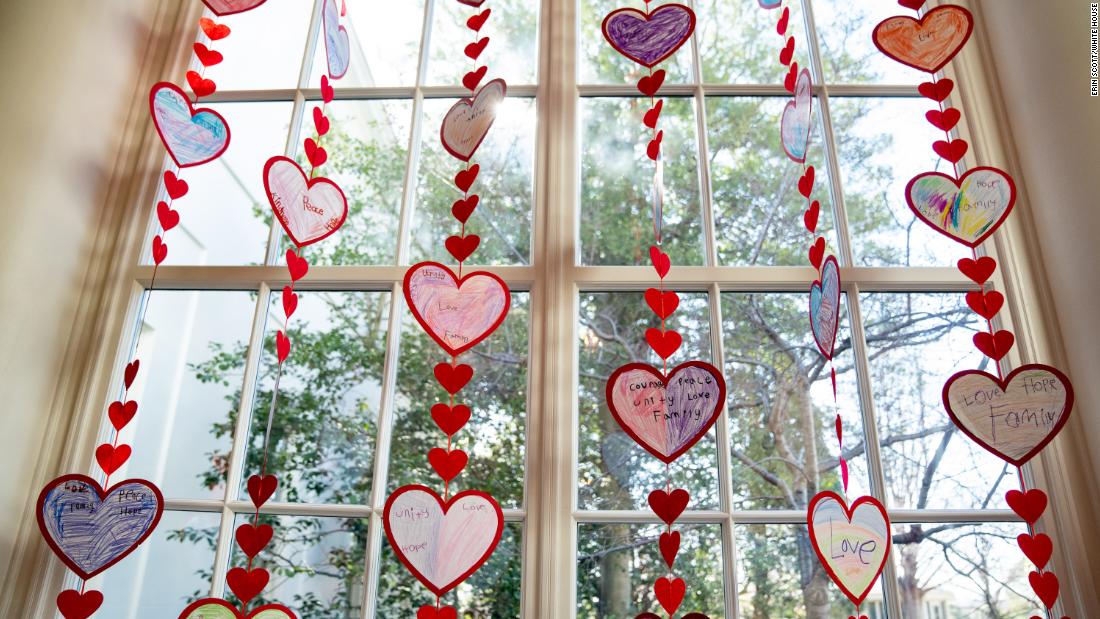 A large, hand-painted wooden heart popped up overnight in front of the White House, accompanied by wooden cutouts of the Biden pets.

The heart quotes 1 Corinthians 13:13: “Three things will last forever — faith, hope, and love — and the greatest of these is love.” Likenesses of the Bidens’ puppy, Commander, and kitten, Willow, are on either side of the heart.

It’s also festive inside the White House, with heart-shaped art work from local students displayed on the East Landing of the White House. Second grade students from Alejandro Diasgranados’ class at Aiton Elementary School in Washington, DC, decorated hearts hanging in the windows.

Twenty of Diasgranados’ students will come to the White House for a tour Monday, and Biden is expected to bring the second graders outside to see the wooden heart, per the office of the first lady.

“Many of Mr. Diasgranados’ second grade students have never been to the White House and are excited to have their ‘heart-work’ on display in the East Wing,” her office said.

Biden previously decorated the White House lawn for Valentine’s Day last year, with pink and red hearts with words like “hope” and “healing” and “kindness.”
But as Biden commemorates the festive holiday, there is a sobering reminder visible from the same lawn of another anniversary. Four years since the massacre at Marjory Stoneman Douglas High School in Parkland, Florida, one Parkland dad has unfurled a sign from a crane just a few blocks away from the White House.

The sign was placed by Manuel Oliver, the father of Joaquin “Guac” Oliver, who was among the 17 people murdered that day.

“45K people died from gun violence on your watch!” the sign says, featuring a photo of Joaquin Oliver and directing people to a website with statistics on gun violence during the Biden administration.

President Joe Biden commemorated the anniversary in a statement this morning as he renewed calls to combat gun violence.

“On this difficult day, we mourn with the Parkland families whose lives were upended in an instant; who had to bury a piece of their soul deep in the earth. We pray too for those still grappling with wounds both visible and invisible.”

He pointed to his administration’s plan to curb gun violence and pointed to funding in his congressional budget request to reduce violent crime.