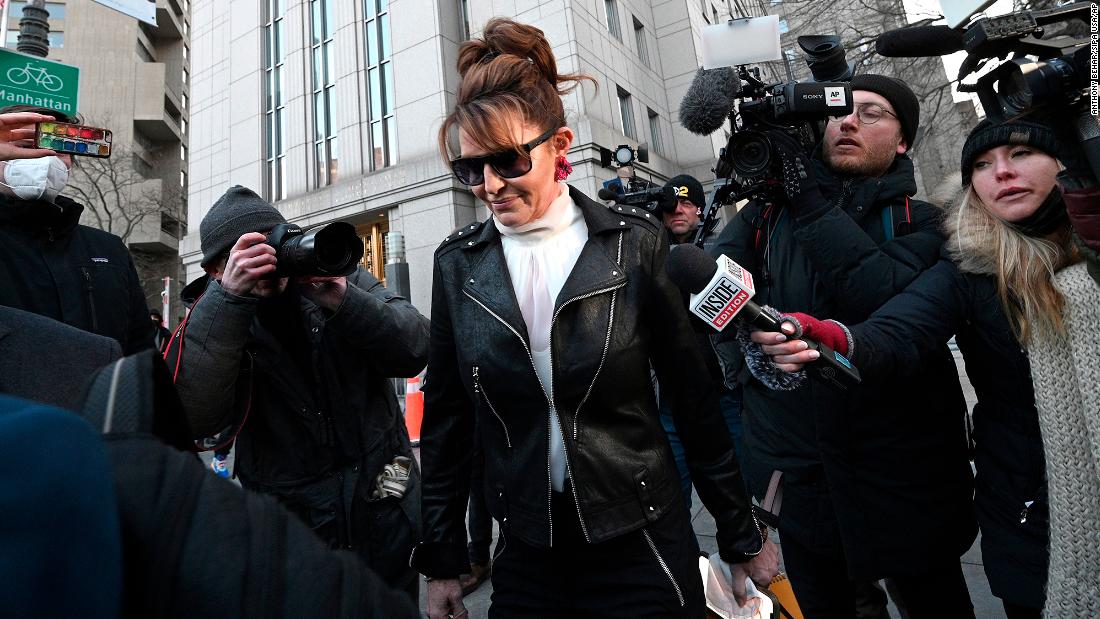 US District Judge Jed Rakoff announced the decision on February 14, while jurors were still deliberating, in response to a New York Times’ motion to dismiss, after listening to arguments from both sides. Tuesday’s filing is a written opinion explaining his decision which he indicated was forthcoming when he announced his ruling from the bench during deliberations.

“At trial, plaintiff Sarah Palin wholly failed to prove her case even to a minimum standard required by law,” Rakoff said in his decision Tuesday.

Rakoff said Palin’s team faced a heavy burden and needed to show “clear and convincing proof” that the newspaper knew a statement was false but published it anyway, or that it acted with reckless disregard for the truth or falsity of the editorial. Instead, according to the opinion, “the Court finds that Palin adduced no affirmative evidence” to prove that the paper published the editorial with the state of mind known as “actual malice.”

Kenneth Turkel, an attorney for Palin, had no comment when contacted by CNN. Earlier Tuesday, Palin’s legal team filed a request for Rakoff to disqualify himself from the case, to be allowed to interview jurors from the trial and to ask for a new trial.

Katie Fallow, senior counsel at the Knight First Amendment Institute at Columbia University, said the court was correct to dismiss the case.

“The media will sometimes get things wrong, as the Times did here. But as the court and jury found, the Times made a mistake that it corrected within hours,” Fallow said in a statement to CNN. “Press freedom can’t survive without breathing space for these kinds of mistakes, as the Supreme Court recognized more than half a century ago. Holding the Times liable here would have significantly reduced that breathing space and chilled press freedom.”

Palin sued the Times and its former editorial page editor James Bennet in 2017 after they published an editorial that erroneously linked a map that Palin’s political action committee had posted to the 2011 shooting that killed six and injured former Congresswoman Gabrielle Giffords.
The editorial in question is called “America’s Lethal Politics” and was published on the day of the 2017 shooting at a baseball practice that injured Congressman Steve Scalise. It was meant to address heated political rhetoric ahead of the shooting, but it erroneously said that there was a “clear” link between a map that had crosshairs over congressional districts, including Giffords’, and the shooting that injured her. Bennet testified that he added language about there being a clear link and that once he realized his error, he worked to quickly issue a correction.

Rakoff said in his decision that “no reasonable jury” could find clear and convincing evidence that Bennet or the Times knew that the allegedly libelous statements were probably false and recklessly proceeded to publish them anyway.

Rakoff’s decision to dismiss the case while jurors deliberated would have set aside the jury’s verdict had it found the Times liable and entered Rakoff’s judgment as a matter of law. But the jury ultimately found the Times not liable, which Rakoff said “further validated” his argument that no reasonable jury would have found the newspaper liable.

Shortly after the verdict, Rakoff issued an order sharing that some jurors told his law clerk that they had seen reports through “push notifications” that the judge had dismissed the case.

Rakoff said he was initially not familiar with “push notifications” when an attorney mentioned them as a possible issue and didn’t fully appreciate the potential for jurors to be what he called “involuntarily informed” about his ruling while they were deliberating. After the verdict, Rakoff said in an order that multiple jurors said they’d gotten push notifications that he had dismissed Palin’s case, but that the information played “no role whatsoever” in their deliberations.

“But the jurors who saw the media coverage say they did as instructed: they turned away from the reports and set the information aside for the remainder of the deliberation,” Rakoff said.