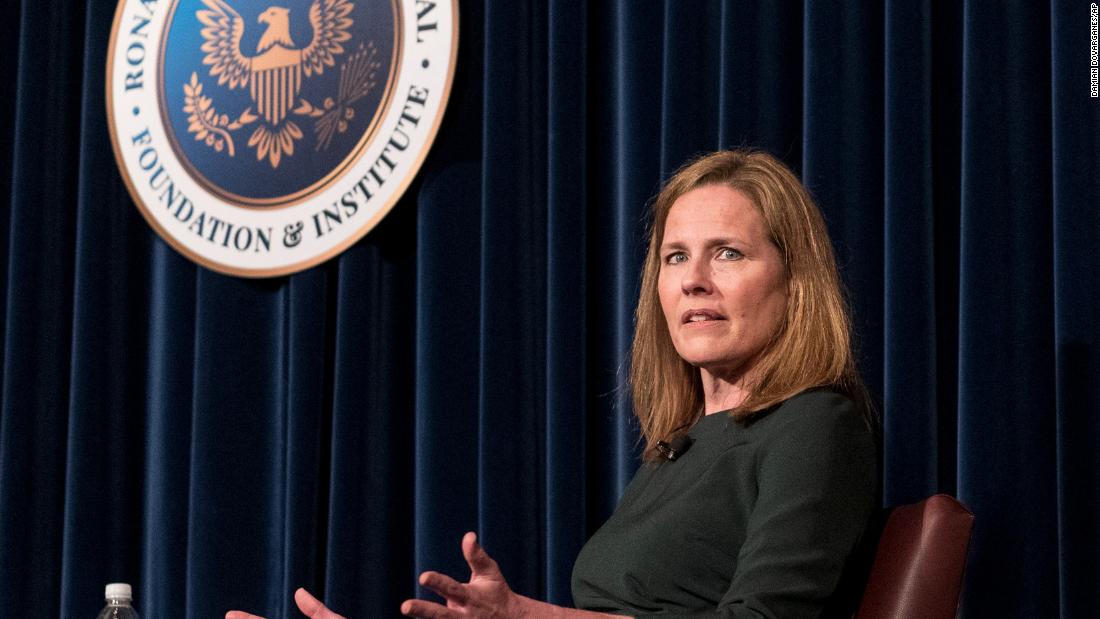 “It just happened very quickly,” Barrett told an audience in California, reminiscing about her 2020 experience, which was rushed by Republicans because of the coming presidential election. She noted that her hearings had occurred on a “compressed timeline” and said she “was scrambling” to set up chambers, prepare for oral arguments and read briefs. Asked if she would have advice to give a new justice, Barrett said — without referring to Jackson directly — that a new justice is likely to start hearing cases in October, which will offer some lead time over the summer months and ease “the shift” into becoming a public figure; a transition she suggested was not easy.
If confirmed, Jackson will take the seat of Juistice Stephen Breyer, who is expected to step down at the end of the term sometime in late June or early July. Barrett will also relinquish her seat as the court’s most junior justice to Jackson.
The event at the Ronald Reagan Presidential Library in Simi Valley, California, marked the third known speaking event Barrett has had since her confirmation in October 2020. She appeared at her alma mater Notre Dame Law School in February, and she gave a talk at the University of Louisville’s McConnell Center in 2021. “My goal today is to convince you that this court is not comprised of a bunch of partisan hacks,” she said then, according to the Louisville Courier Journal.
During a wide-ranging discussion Monday with Frederick J. Ryan Jr., chairman of the Board of Trustees of the Ronald Reagan Presidential Library Foundation, Barrett also told a story of how back in 2018, when she was under consideration for the court after Justice Anthony Kennedy retired, she jumped over a fence surrounding her church to evade news photographers attempting to get a picture of her outside the church.

“I faced a choice: I could either hop the fence or go out the front and give them the satisfaction of the picture,” she said.

After she was ultimately confirmed to take the seat of the late Justice Ruth Bader Ginsburg, her first congratulatory calls came from Chief Justice John Roberts and Justice Sonia Sotomayor, she said.

Ryan asked Barrett about her life balance — juggling her job, marriage and seven children. She said that she and her husband, Jesse, face the same challenges as other couples “who are both working and have children at home.” She said they have shared child care duties and spread themselves thin at times throughout their marriage. She noted that as her husband is also a lawyer, they are very careful to avoid professional conflicts.

“It is something that we are very conscious of and very careful about,” she said.

That prompted Ryan to ask her if there should be court guidelines on what “working spouses should and should not do.”

“I don’t think most spouses would be very happy about those guidelines,” she responded. “Certainly when I try to give my husband guidelines about what to do or not to do in the house, even, that does not go over very well,” she said to laughter.

The question and Barrett’s answer were specific to her situation, but they came as Justice Clarence Thomas and his wife, Virginia “Ginni” Thomas, a conservative activist, have dominated the news cycle since reports surfaced that the House select committee investigating the January 6, 2021, riot at the US Capitol has in its possession more than two dozen text messages between Ginni Thomas and former Trump White House chief of staff Mark Meadows. The messages, according to sources, were exchanged between early November 2020 and mid-January 2021. Reviewed by CNN, they show Ginni Thomas pleading with Meadows to continue to fight to overturn the election results.
The revelation of text messages between Thomas and Meadows, both allies of former President Donald Trump, comes as progressives and some legal ethics experts see her activism as a potential conflict of interest for Clarence Thomas’ work on some Supreme Court cases.

Barrett was not asked about the controversy Monday night. She did confirm that she is writing a book, and her talk was briefly interrupted by a protester. “As a mother I am used to distractions and sometimes outbursts,” she joked.

She seemed to discourage the idea of cameras in the Supreme Court chamber, remarking that “people don’t behave the same when they know there is a camera present.”

“Cameras are a uniquely tricky issue,” she said.

She reminisced about her days living in Indiana before her nomination, where she was a law professor and later a federal appellate judge. She said she treasured her long-standing friends, “to whom I am just Amy.”

Many Democrats are still furious that Republicans pushed Barrett’s confirmation through on an expedited time frame close to the 2020 presidential election after having blocked hearings for then-President Barack Obama’s nominee Merrick Garland early in 2016 — citing the upcoming presidential election. Barrett, in replacing liberal icon Ginsburg, solidified the court’s conservative majority.

Monday’s speaking event came during a brief recess in the high court’s term, as the justices are mulling major disputes including a challenge to Roe v. Wade as well as a major Second Amendment case.