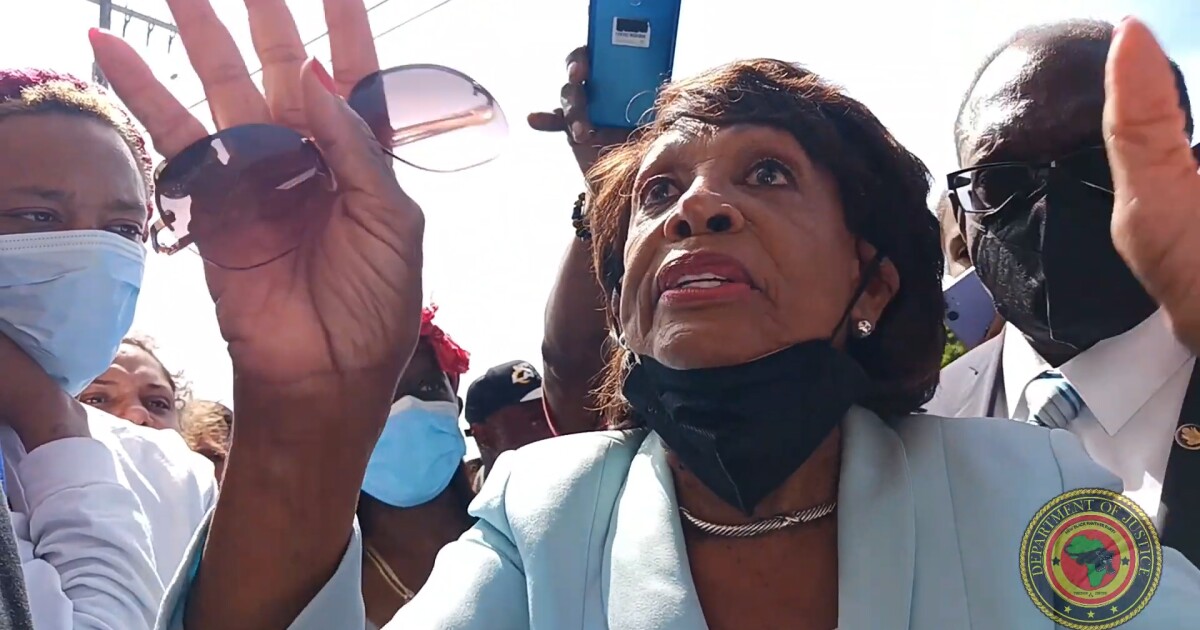 But then an unofficial social media post erroneously promised that those who showed up would get rare vouchers for permanent, subsidized housing. And Fathers and Mothers Who Care was swamped. Homeless people lined up on a corner in West Athens before daybreak on Friday and Tuesday only to have their hopes dashed.

At the Friday event, heated arguments broke out among the hundreds of people who turned out for assistance, more evidence of the brutal Los Angeles housing market and the desperation felt by the tens of thousands of Angelenos who are unable to secure permanent places to lay their heads.

The crowd overwhelmed Los Angeles Homeless Services Authority workers, who were unable to meet more than a small fraction of the need and left while throngs of people were still waiting for help.

The housing authority was there at the behest of Rep. Maxine Waters (D-Los Angeles), who delivered emotionally charged remarks to the crowd Friday, at one point using an expletive to defend her efforts to relieve the city’s housing and homelessness crisis.

On Tuesday, dozens of people showed up at the third event, again expecting to receive Section 8 housing vouchers. Again, they were told that they were misinformed and that Fathers and Mothers Who Care was only able to take people’s information and enter it into an emergency housing database.

Joyce Burnett, a 77-year-old disabled woman, said she had attended the Friday event and returned at 6:15 a.m. Tuesday in hopes of securing permanent housing.

“I’m homeless. I’m living wherever I can. And when I heard about this, I came down here on Friday,” she said.

“Maxine Waters was here, and she said to come back Tuesday with our paperwork filled out,” Burnett said. “I have it, everything they asked for. But every time we get near the front of the line, they shut the door. They opened the door about 20 minutes ago and said they’re not servicing anyone else today.”

Waters told the gathering of mostly homeless people Friday that “you cannot get Section 8 vouchers here.” And later, “I want everybody to go home.”

The response was fast and angry, a voice from the crowd yelling, “We don’t got no home, that’s why we’re here. What home we gonna go to?”

Waters, who wore a powder blue pantsuit and had a black face mask pulled down below her chin, laughed and said, “Nothing is going to happen here today.” Her remarks were captured in video of the event obtained by The Times.

Less than half a minute later, the congresswoman responded to a question from the founder of Kingdom Warriors Foundation, a local housing advocacy nonprofit. Jabbing her finger into the air, Waters said, “Excuse me, there’s nobody in Washington who works for their people any f— harder than I do. I don’t want to hear this. No, no, no.”

Waters then answered a plea that she work with the community to address the housing crisis: “That’s what I do every day. The money that you got thus far came from me in Washington, D.C.” She walked away moments later after telling the crowd, “I will continue to work. I will get the information out to you.”

Waters declined to address specific questions about the events and her Friday remarks during a phone call from Washington on Tuesday morning, instead saying “it’s a bunch of rumors” and requesting that this story not be published.

“You’ll hurt yourself and the community trying to put this together without background,” she said. “I don’t want you to start trying to write it, you won’t understand it.”

During the call, which she cut short after about five minutes, Waters would only say that “people just showed up on Thursday,” that “they were confused” and that she had contacted LAHSA on Thursday, after the first of the three events.

Blanca Jimenez, Waters’ district director, did not provide answers to a list of detailed questions sent via email, instead providing a link to a TV station’s glowing coverage of Waters’ appearance at the Friday event along with an image of Waters addressing the crush of people in the heart of her congressional district.

“Someone shared this photo with the office,” Jimenez wrote. “Isn’t she brave?”

On Tuesday, dozens of unhoused people stood in line for hours outside a painted metal door at the front of a tan stucco building with barbed wire along its roof on the north end of West Athens. The door remained shut most of the day, occasionally opening to allow small numbers of people inside and for Linda Kelly, operations director of Fathers and Mothers Who Care, to address the crowd.

“There were never any vouchers automatically handed out,” Kelly said shortly after 1 p.m. Tuesday. “LAHSA gave out housing packets. You need to take that back to LAHSA. We cannot process anyone else.”

The dozens of people who remained in line loudly protested, demanding they be seen after waiting for hours in the sun. Kelly grew increasingly exasperated, telling one vocal woman, “As you can see, it’s mayhem, ma’am … We cannot handle this crowd. We cannot handle what’s going on.”

Many of the attendees on both Friday and Tuesday said they were drawn there by a graphic posted on social media Friday that stated that “[t]hey giving out section 8 on imperial and Vermont today and on Tuesdays and Wednesdays go get some help!!”

Cre King, 36, said she has been homeless for about six months. She said she saw the posting on Instagram last week and showed up at the Tuesday event at 5 a.m.

“I had a doctor’s appointment I had to cancel because I thought I would be seen here today. I wasted two whole days of my life doing this — Friday and today,” she said. “We’re all here, we’re all struggling. Times are hard.”

Kelly said Tuesday that the social media post was not authorized by her organization or any agency, and that its claim that Section 8 vouchers were being handed out freely at the location was erroneous.

“Someone got issued a voucher, their baby daddy or whoever was with them, and they posted it like, ‘look, I got my voucher,’ and it went viral,” she said. “Then Maxine Waters came and it went more viral.”

The only government agency in attendance Tuesday was the Homeless Outreach Program Integrated Care System, which offered access to emergency temporary housing, an option almost no one accepted, Kelly said.

In recent years, L.A. homelessness has grown increasingly acute, even as billions of public dollars have been allocated to address it. In 2020, the last homeless count for which data is available found that there were 66,436 people experiencing homelessness in L.A. County, a 13% spike from 2019.

As inflation has accelerated and rents have gone up across the county, many people who were previously making ends meet have been driven out onto the street. The federal Housing Choice Voucher Program, commonly known as Section 8, presents an opportunity for elderly people, low-income families and disabled individuals to get into permanent homes. For many unhoused people, it’s the best hope they have to rebuild their lives.

Christopher Yee, a spokesman for LAHSA, did not directly answer a list of detailed questions sent via email. He instead provided a written statement explaining that “[a]t Congresswoman Waters’ request Thursday night, LAHSA staff was present at Fathers and Mothers Who Care Friday morning in order to conduct assessments to see if people qualified for federal Emergency Housing Vouchers.”

The founder of the Kingdom Warriors Foundation, who goes by the name Kridikel Race Truth Bey, said she personally counted more than 450 people in the crowd at one point Friday and that she spent much of the day taking down attendees’ names and contact information to help them navigate the housing system.

Of those, “maybe not even five people got paper applications in their hand that day. Everyone else got the shaft,” she said.

“It was a chaotic environment with children there. It was out of control,” she said. “Everybody was in a mass confusion because they don’t know the housing process themselves. So they thought they were there getting a voucher.”