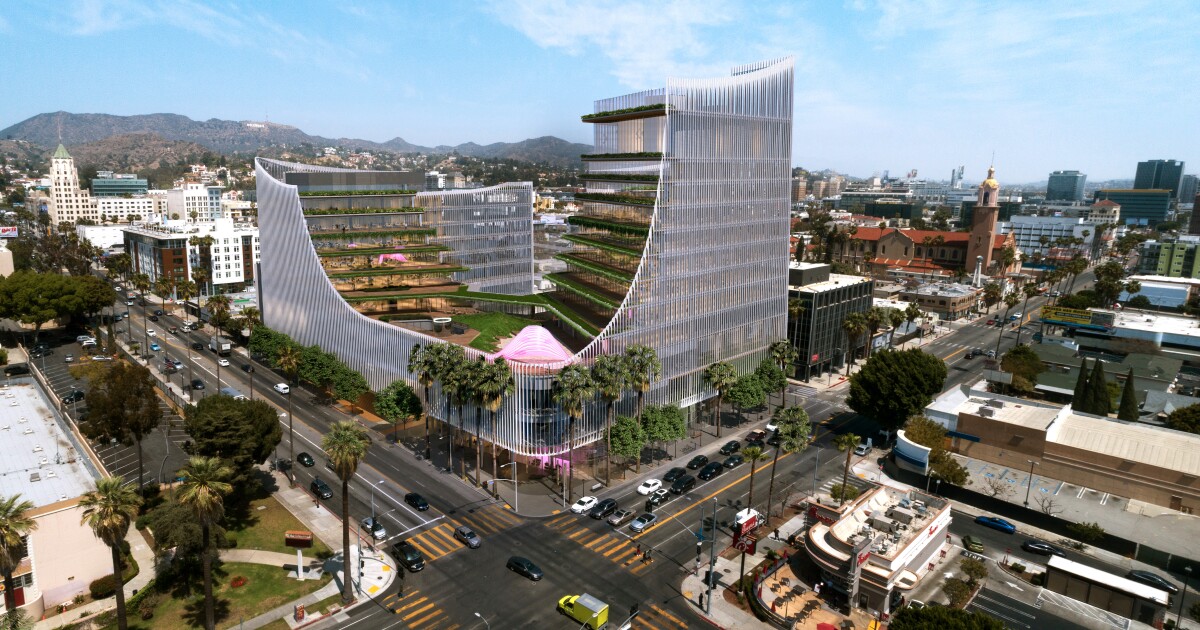 Developers led by a Grammy Award-winning artist plan to transform a prominent corner of Sunset Boulevard by building a $500-million office and recording center that would be one of the largest Black-owned enterprises in the Hollywood area.

Plans for the 13-story indoor-outdoor complex are to be submitted to the city Friday by Philip Lawrence, the owner of storied Hollywood recording studio Record Plant, in partnership with entertainment business manager Thomas St. John.

Lawrence, who won eight Grammys as a songwriter and record producer, has contracted with established real estate figures to build the nearly two-acre project at Sunset Boulevard and Highland Avenue, across the street from Hollywood High School.

The complex was designed by HKS, the architecture firm that designed SoFi Stadium in Inglewood, where the Super Bowl was played in February.

Lawrence’s goal is to meld a top-flight recording studio with offices to be rented to people in the entertainment business. There would be public spaces including an auditorium and an amphitheater where visitors could hear concerts in a landscaped setting high above the street.

“We want to create a destination where artists can experience, evolve and have access to all aspects of entertainment,” Lawrence said. “So we’re building state-of-the art recording facilities for music, film, composing and all of the musical needs around production.”

Lawrence, who has collaborated with such singers as Bruno Mars and Adele, hopes to build on the success of his nearby Record Plant, where chance conversations in the hallway or communal kitchen can sometimes lead to artistic collaborations.

“The next thing you know,” Lawrence said, “there is a big song out with Beyonce, Ariana Grande and Frank Ocean and people are like, ‘How did that happen?’”

That particular collaboration hasn’t occurred yet, but Lawrence plans to lay on luxury features that popular musicians may find appealing. Top-floor recording studios with views of the Hollywood Hills and downtown L.A. would have kitchens, entertainment space and sleeping quarters.

“You could essentially live here while you are cutting tracks,” architect Heath May of HKS said. “The mission is to increase creativity.”

The complex is intended to have some of the highest-profile recording studios in the industry with pre- and post-production facilities, along with so much other activity that the campus was likened to “an Ant Farm” by May’s colleague architect Greg Verabian.

The largest component would be 430,000 square feet of offices for rent, perhaps to several entertainment firms in search of a Hollywood address or to one large tenant that may want to brand the building with its company name. Office occupants would have access to outdoor landscaped terraces that could be used for work or during off-duty hours looking down on concerts at the amphitheater on the park-like fifth-floor rooftop.

In charge of getting the project built is developer David Malmuth, who oversaw development of the Hollywood & Highland entertainment and office complex (now known as Ovation Hollywood), where the annual Academy Awards are held.

At street level would be a restaurant, a coffeehouse and a 500-seat auditorium that could be used for concerts, tenant events, public meetings or educational gatherings.

“We see this place as being an immersive playground for students, artists, creators and innovators of all types while also creating more opportunities in the entertainment industry,” said St. John, who is chief executive of Cmnty Culture, the Black-owned music and media enterprise he launched with Lawrence in 2020 that would operate the new studios.

The planned Hollywood development is dubbed Cmnty Culture Campus, though that name could be changed later to reflect the identity of a large office tenant.

Lawrence and St. John intend to engage students at Hollywood High, which has magnet programs in performing arts and new media.

“We hope to build sister programs,” Lawrence said, that might include instruction, internships and master classes with entertainment professionals. “However we can bring kids to understand how the entertainment industry works,” he said. “Education is very important to the team and me.”

The campus would have underground parking for 1,000 vehicles. It would replace commercial buildings, parking lots and a plant nursery. Residential buildings on the block would remain intact, the developers said.

Among the commercial buildings on the site is Live House, a performance venue with dance studios that has been closed but is now in escrow to Cmnty Culture, Malmuth said. The developers plan to temporarily reopen Live House as they plan the new campus.

Demand for office space in the years ahead is uncertain as many businesses reevaluate their space needs after working from home became common during the COVID-19 pandemic, Malmuth acknowledged, but technology and entertainment producers have been among the companies still expanding their office footprints.

Occupants of the campus would not necessarily be in the music business. Streaming entertainment provider Netflix is the largest office tenant in Hollywood and Sunset Boulevard is home to multiple movie and recording studios.

Sunset, which has seen a revival of entertainment uses in recent decades, “has become arguably the most important content creation corridor in the world,” Malmuth said.

Still, city approval of the project is not a foregone conclusion. The process commonly takes 18 months or longer.

“We don’t take for granted that we’re going to be able to get entitlements,” he said, but “we think we’ve got a project that is extremely attractive both physically and in terms of job creation.”

If approved, construction of the campus would take about three years. Lawrence hopes it will eventually become a Hollywood fixture.

“This is our love letter to Hollywood,” he said, “to hopefully bring the community together for generations to come.”