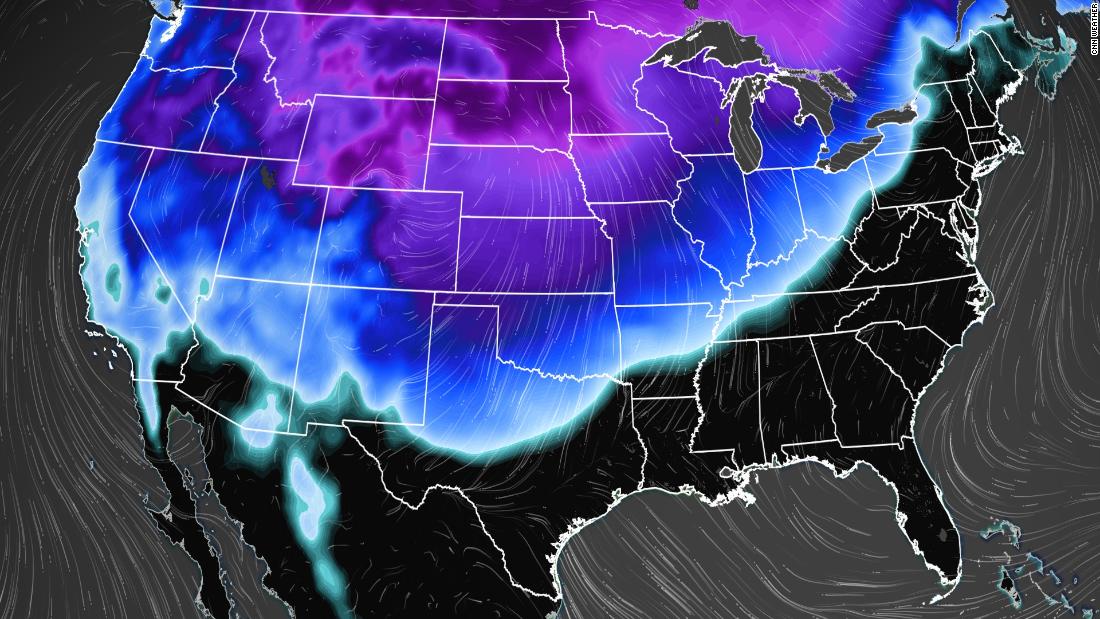 “Temperatures will be 10 to 20 degrees below average over the northern tier states by Monday morning,” the Weather Prediction Center said Saturday.

And that’s just the beginning. The thermometer will slip to 30 to 40 degrees below normal by Tuesday and Wednesday, as a strong high pressure system begins to spread Arctic air farther south and east.

Many cities will see a sharp polar plunge in a 48-hour span.

Denver will go from a high temperature in the low 60s Sunday all the way down to 15 for the peak Tuesday, with snow showers.

Rapid City, SD will slide from a high of 50 degrees Sunday to 0 degrees for a high Tuesday. By Tuesday night, the bottom will drop out in the Black Hills to 17 degrees below zero.

Some cities will see the drastic drop in temps even more quickly, in a mere 24 hours.

In Amarillo, TX the high temperature Monday will top out in the low 70s, but quickly drop to the mid 30s just one day later.

Wichita, KS will plummet even further, going from a high near 70 Monday down to the mid-20s for a high Tuesday.

With such cold temperatures already in place, any moisture moving through will result in snow spreading across a wide region.

The snow will begin across the Upper Midwest, but since the cold front will not move very quickly, it will allow for considerable snowfall rates across the area.

“A long period of snow and gusty northeast winds will begin late Sun night and continue thru Tuesday,” the NWS office in Twin Cities, MN said in a tweet. “Snow may be heavy at times with significant accumulations across parts of the Upper Midwest.”

The slow movement of the system will also be a concern on the southern side of the storm due to very heavy rain.

“Confidence is increasing that a multiday rainfall event will bring concerns of flooding,” the NWS office in Nashville said.

The bulk of the rain will fall in the Southeast Monday and Tuesday.

The South will be one of the few areas dealing with above average temperatures Monday, which will help fuel severe storms.

The Ark-La-Tex region as well as the lower and mid-Mississippi Valley will see possible tornadoes, large hail and wind damage from Monday afternoon into Monday night.

You can track the storm here as it develops this week.