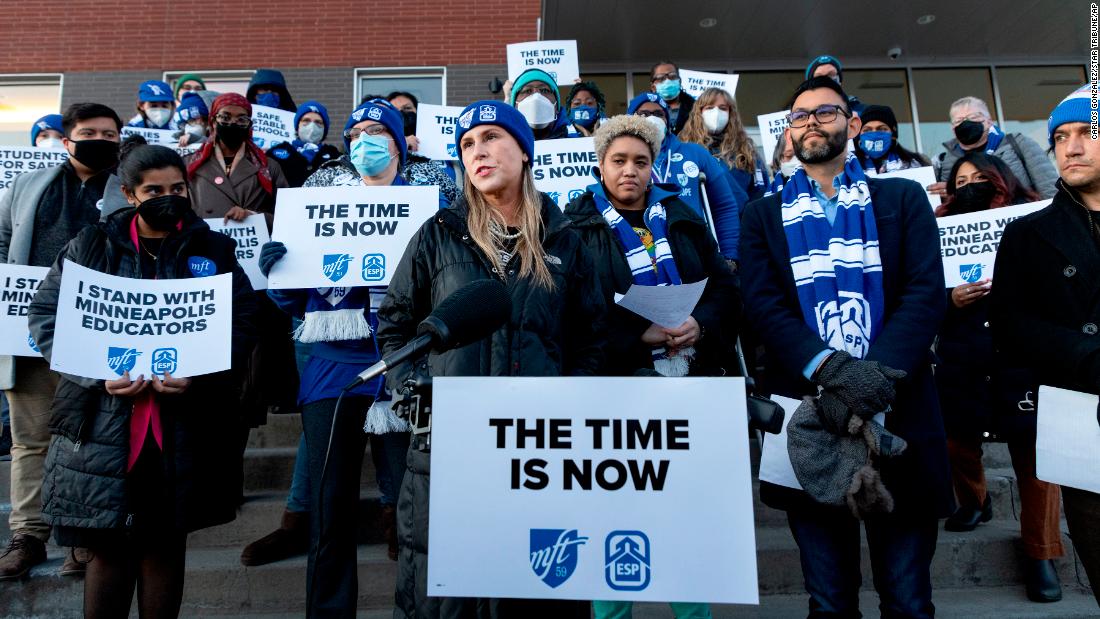 The Minneapolis Federation of Teachers (MFT) and Education Support Professionals (ESP) are seeking “a living wage” for ESPs, “lowering class sizes, and for safe and stable schools,” according to a post on the teachers union’s Facebook page — goals that were clearly spelled out Tuesday morning on picketers’ signs outside Justice Page Middle School in South Minneapolis.

“We are going on strike tomorrow for the safe and stable schools that our students deserve,” MFT President Greta Callahan said Monday in a news conference.

“We have continued to do so much more with so much less,” Callahan said. “Those at the top of this district continue to hoard power — continue to do so much less with so much more. And if we don’t intervene, we believe that the Minneapolis Public Schools will cease to exist. We are in the fight for strong public schools for our city, for our students.”

Minneapolis Public Schools called news of the strike “disappointing” in an update on its website, but said “we know our organizations’ mutual priorities are based on our deep commitment to the education of Minneapolis students.” The district has 31,598 students, 3,266 teachers and 1,223 education support professionals, per its website.

“MPS will remain at the mediation table non-stop in an effort to reduce the length and impact of this strike,” the district said.

There had been no movement by mid-morning Tuesday on the federation’s demands, Callahan said at a news conference.

Among the striking teachers’ supporters were high-profile leaders of national unions, including American Federation of Teachers President Randi Weingarten, who echoed the local unions’ demands and called Minneapolis class sizes “way too high.”

Weingarten pointed to neighboring St. Paul, Minnesota, where teachers had been poised strike before the Saint Paul Federation of Educators and Saint Paul Public Schools announced late Monday they had reached a tentative agreement on new contracts.

This was a “tale of two cities,” Weingarten said, calling on Minneapolis school district leaders to “get to the table.”

The National Education Association’s 3 million members also stand in solidarity with Minneapolis teachers, that group’s president, Becky Pringle, told reporters Tuesday morning. “And we will not stop until we ensure … every single student has the resources they need and deserve,” she said. “And the most precious resource are our educators.”

Families can pick up meal bags daily with breakfast and lunch for their students at their school beginning Wednesday, the district added, and online learning activities will be available.