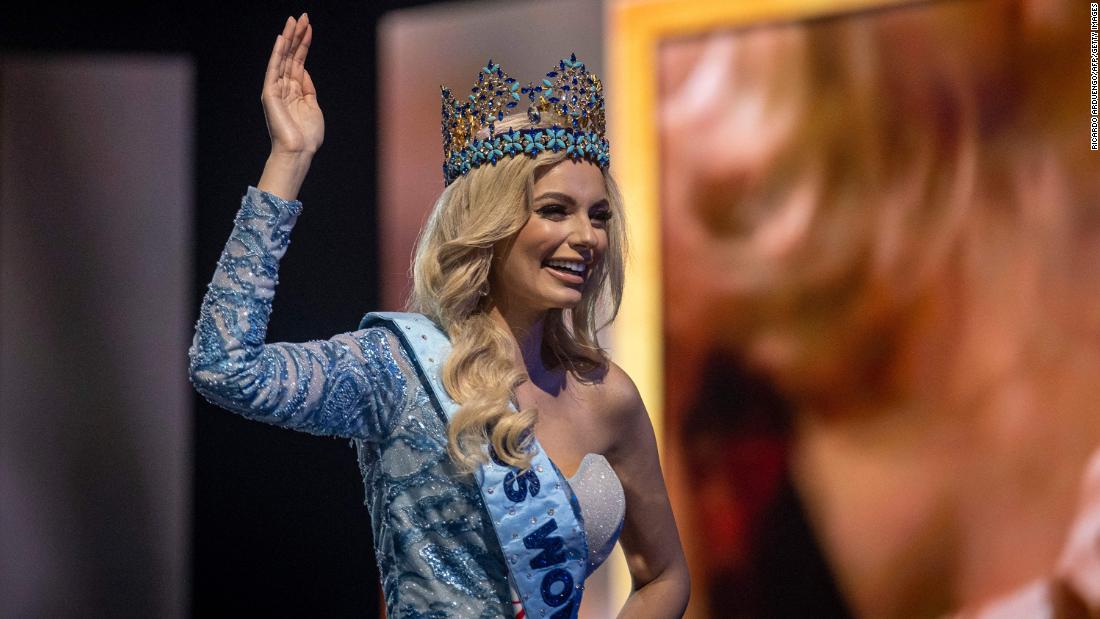 Poland’s Karolina Bielawska was crowned the 70th Miss World on Wednesday, with contestants and organizers expressing solidarity with Ukrainians during an on-stage candle tribute at the televised finale.
Bielawska, who works as a model and is studying for a master’s degree, claimed the title in Puerto Rico’s capital, San Juan, three months after the contest was delayed due to a Covid-19 outbreak. Miss USA, Shree Saini, was named first runner-up, while Ivory Coast’s Olivia Yacé took the second runner-up spot.

As well as the usual performances and live judging, the glitzy ceremony featured messages of support for Ukraine following Russia’s unprovoked invasion of the country, which shares a border with Poland. In one segment, Jamaica’s Toni-Ann Singh, who won Miss World in 2019, sung a rendition of Celine Dion and Andrea Bocelli’s “The Prayer” as those on stage and in the audience held candles aloft.

The words “a prayer for peace” appeared on a screen behind the finalists. The official Miss World Twitter account tweeted that the performance was part of the pageant’s efforts to “stand with Ukraine.” Organizers also said that more than 7,000 candles had been prepared for the show, which was broadcast in over 100 countries.
In a statement published prior to the pageant, CEO of Miss World Ltd., Julia Morley, said: “We must do something, even if it may seem never enough to light one candle, if we all light a candle together we can change the world,” while inviting people around the world to “shine their light for Ukraine” and post images to social media.
Earlier this week, Miss World organizers published a video message from 2016’s Miss Ukraine, Oleksandra Kucherenko. Against a virtual backdrop of footage from the conflict, she appealed to countries around the world “to support us, to close the sky above Ukraine and to save the world (from a) nuclear catastrophe,” adding: “Our peace is your peace.”

The current Miss Ukraine, Oleksandra Yaremchuk, who did not qualify for the final event, is currently in Kyiv, the organization said.

Initially scheduled for December, the Miss World pageant was postponed after multiple people linked to the event — including 23 of the 97 contestants — tested positive for Covid-19 with just days to go.

Only the 40 semi-finalists were invited back for Wednesday’s rearranged event, which was hosted by the English singer and TV personality Peter Andre and the Mexican singer and actor Fernando Allende.