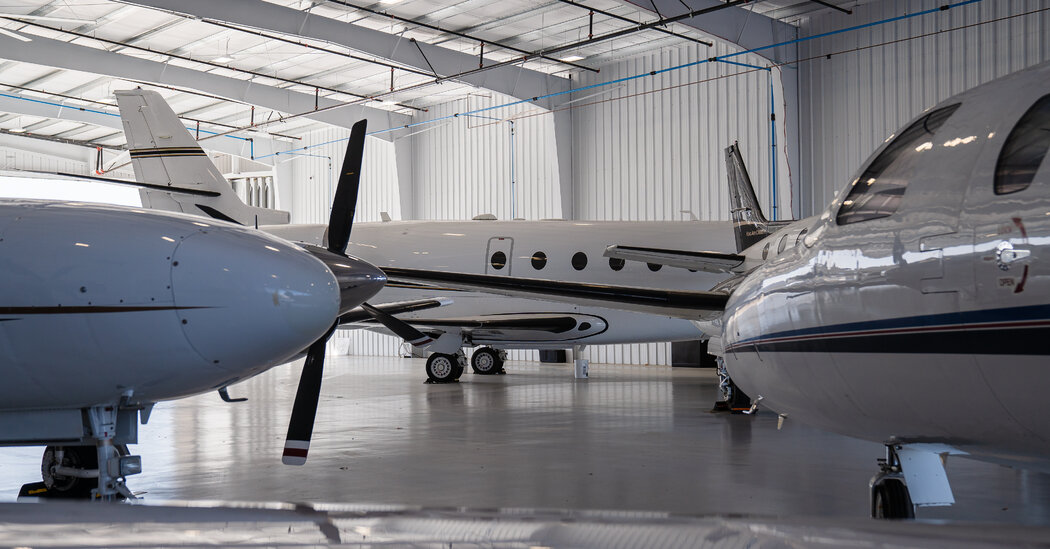 When Mike Pellitteri started flying his private plane in 2013, it was easy to find a spot to park it. But over the past decade, hangar space has become sparse, so Mr. Pellitteri, a general contractor, has joined an increasing number of developers who have never worked in aviation before: He’s building hangars himself.

Private air travel skyrocketed in the pandemic as more travelers, eager to avoid sitting next to a potentially sick passenger or spending a long flight wearing a mask, have made the switch from commercial to charter.

Business jet takeoffs and landings were up as much as 40 percent in 2021 from the year before, according to some estimates, and the business aviation tracker WingX reported that 2021 was the busiest year on record for global business jet activity.

But as more private planes have filled the sky, the crunch — which was apparent in 2019 — has created gridlock over parking on the ground.

Mr. Pellitteri, a resident of Seattle, said he had entered the hangar business after being frustrated by the inability to find a spot to park his plane when he shuttled to his second home in Coeur d’Alene, Idaho.

By the end of 2023, he plans to have completed four new hangars at Pappy Boyington Field in Coeur d’Alene: two for smaller jets and two for midsize aircraft like the Gulfstream 280. He plans to sell the smaller ones for around $1.5 million, but said the price could increase because rising costs of steel and labor have already pushed him well over budget.

It’s not just Coeur d’Alene, Mr. Pellitteri said; there are no hangars available at Paine Field near Seattle, either. “Every year it’s gotten busier,” he said. “You go to Paine Field now, there’s more airplanes than there’s places to park.”

The United States has more airports — more than 20,000 — than any country in the world, and local municipalities own the vast majority of them. When it comes to creating more hangar space for private jets, however, developers work with companies called fixed-base operators, which function much like marinas do for shipyards by providing all of the necessary services for flying. Developers often negotiate long-term leases with the operators and build hangar space on that land.

One of those developers is Tal Keinan, an American-Israeli investor and former fighter pilot who is developing a network of luxury hangars. It’s also his first foray into the aviation world — his company, Sky Harbour, opened its first locations in Houston and Nashville in 2021, with sites in Denver, Miami and Phoenix scheduled to open next. The hangars include adjoining offices and kitchens, as well as line services such as handling, fueling, cleaning and detailing.

“There’s a deficit of hangars — it’s chronic,” Mr. Keinan said. Part of the reason may be optics: Most airports are publicly run, he said, and “it’s not a very good political use of capital to build hangars for business jets on your airport.”

Sky Harbour’s luxury, full-service model is new but not unique; other businesses like CloudNine Hangars, which is building four full-service hangars at the Camarillo Airport in California, are also offering hangars that blend aircraft parking and offices into one sleek space.

But there’s another issue at play, too, said Katrin Gist, who leads aviation properties for CBRE, a commercial real estate service firm. At many airports near major city centers, there simply is no more land left to lease.

“Even before Covid, we were on an upward economic cycle, and hangars were already pretty in demand,” she said, adding that interest in private planes grew among passengers and buyers during the pandemic. “Those two factors have created the perfect storm for hangar demand nationwide.”

But with airport hangars, the overriding rule of commercial real estate applies: Location is king. A hangar at an airport near a busy city center is much more in demand, and much harder to come by, than one farther flung.

“The majority of private jets want to be at certain airports, and those are the ones that are the most crowded,” Ms. Gist said. “If you go to more tertiary airports in other parts of the country, you’ll still find some hangar space available.”

In the past year, Ms. Gist has represented a real estate deal for a 63,000-square-foot hangar facility at Burbank Airport, just outside Los Angeles; an 18,000-square-foot hangar facility at Paine Field; and a development of 27 hangars at John Wayne Airport in Orange County, Calif. She would not disclose cost but estimated that values had increased as much as 30 to 50 percent since the beginning of the pandemic.

Indeed, aircraft owners are finding that hangar rents have climbed so much that the cost to park at an airport farther from the city center and then chartering a helicopter in can be cheaper than leasing hangar space at their airport of choice.

Roger Woolsey has a bird’s-eye view of the hangar-space crunch. He is chief executive of Million Air, which franchises 37 fixed-base operators across Canada, Colombia and the United States. About one-third of its franchises are actively seeking additional hangar space, which Mr. Woolsey credits to the run on private jet inventory since 2020.

“Prepandemic, roughly 12 percent of the used aircraft inventory in the world was for sale,” Mr. Woolsey said. “Today, it’s less than 4 percent.”

Kimberly Herrell, owner and chief executive of the jet charter operator Schubach Aviation, has a 30,000-square-foot hangar in Carlsbad, Calif., and was able to secure a secondary hangar space at Carlsbad Jet Center last year. As demand has grown for her services, she has not struggled to find places to park her client’s planes, but she has had issues securing new aircraft.

“Every jet for sale in the U.S. has been purchased,” she said. “It’s just nuts. We’re now sourcing planes from all over the world and trying to bring them in.”

The jump in growth for private air travel has happened so quickly, Ms. Herrell said, that there simply hasn’t been time for the industry to expand in tandem.

“Hangars require such a long process for building and approvals, especially on airport land,” she said. “It’s not shocking that it’s lagging behind.”

Even developers who work with automobiles are getting in the mix. Next door to Sky Harbour’s facility in Miami is the Concours Club, a members-only racing retreat for owners of luxury vehicles that opened in June. But nearly 75 percent of Concours Club members use private planes to fly in to Miami, so Ronald Vogel, a founding member, is developing 300,000 feet of hangar space for his guests on 25 acres of adjacent land.

“I saw the need,” Mr. Vogel said. “Back in 2018, I was flying in and out of there, and there was no hangar availability. There just wasn’t any land.”

He added that the deal was his first commercial real estate project. “This was an interesting pivot for me,” he said.

The rush to build hangars is a symptom of a greater shift in American aviation, said Doug Wilson, president and senior partner of FBO Partners, which offers consultancy services across the country. He likens the boom to those after World War II and in the late 1970s, when money also poured into the aviation business from the private sector.

“There have been two great waves in general aviation, and so much wealth was created during Covid that we may be starting to see the beginnings of a third shift,” he said. “The private sector is going absolutely gangbusters building hangars as quickly as possible.”