Shares in Blend touched a new all-time low of $4.46 on Friday, a day after the company issued 2022 revenue guidance that co-founder and CEO Nima Ghamsari acknowledged was “much lower than consensus estimates.” Blend said it expects to generate $230 million to $250 million in revenue this year, compared to expectations that the company would bring in $343.6 million in revenue, according to an average of estimates by eight analysts tracked by Yahoo Finance.

In announcing fourth quarter and full-year 2021 results, Blend executives said they expect to continue signing new customers and growing market share this year. But they also said they’re looking for ways to cut costs after posting a $169.1 million net loss in 2021, up 126 percent from $74.6 million in 2020.

The Title365 deal, which closed in June, helped Blend boost 2021 revenue by 144 percent, to $234.5 million. But it also helped drive a 129 percent increase in operating expenses, to $313.2 million, which the company is now looking for ways to trim.

At the beginning of last year, Blend employed a total of 577 workers, according to a prospectus the company filed in conjunction with its IPO. A year later, Blend’s headcount had grown to 2,276, including 587 employees in Chennai, India, onboarded as part of the Title365 acquisition, the company disclosed in its most recent annual report to investors. In addition to its San Francisco headquarters, Blend also has offices in Thousand Oaks, California; Coraopolis, Pennsylvania; Omaha, Nebraska; and  Maitland, Florida.

The rapid changes in interest rates and rising inflation have forecasters predicting mortgage originations will fall by 35 percent this year, Ghansari said on a call with investment analysts. Mortgage refinancings are expected to drop by as much as 70 percent this year, he said, “which particularly affects refi-heavy businesses” like Title365 and Blend Title.

“The mortgage industry outlook has changed significantly and rapidly. Arguably, the biggest change in over a decade,” Ghansari said. While Blend’s customers face “acute” challenges, he said Blend is “well positioned despite these market headwinds.”

“Technology is a scalable way to provide great experiences at a lower cost, and our platform will allow them to significantly improve their profitability and advance their competitive position in the industry throughout this downturn in volumes,” Ghansari predicted.

However, “we are well aware of our need to focus on our costs and ultimately, our path to profitability,” Ghansari said, and Blend is “taking actions to bring our expenses in line with market realities. This is especially important for the more operational parts of our business, such as our legacy Title365 business.”

Marc Greenberg, Blend’s head of finance and facilities, hinted at the prospect of layoffs in title insurance, as the company integrates the “legacy” business it acquired in the Title365 deal into its platform.

Blend says the acquisition of Title365 is enabling the company to integrate the title, settlement, and escrow process further into its software platform, in order to develop a marketplace where consumers and financial services firms can choose title insurance partners that provide services at competitive rates. As that happens, the company expects there will be a migration of the Title365 legacy business to Blend’s software-enabled platform.

“In our legacy title business, the transaction volume was driven heavily by refinance and obviously, that’s been negatively affected in a significant way,” Greenberg said. “Just like our customers, we’re looking at dedicating the right level of resources, including the right number of people to that business.”

A number of mortgage lenders have laid off workers in recent months, including Better, Pennymac, Guaranteed Rate and Keller Mortgage.

“On the software platform, we’re obviously taking a very hard look at the cost structure, but we don’t want to throw the baby out with the bathwater,” Greenberg said. “We pulled back very hard on hiring, and we’ve curtailed our expenses and our increases in headcount. We’re looking at savings on our tech stack and how we can even faster achieve economies of scale.”

The double-digit percentage drop in Blend’s share price Friday showed investors were disappointed at the company’s more conservative outlook for 2022 growth. But on their call with investment analysts, Ghansari and other executives highlighted 2021 achievements they say have positioned the company for long-term growth.

“We took the company public and made a major acquisition,” Ghansari said. “We grew our mortgage banking estimated market share by approximately 5 percentage points. We delivered and grew flagship products like Blend Close and Blend Income, and we expanded our footprint in the broader consumer banking space with over 70 new customers. As a result, our revenues grew by 41 percent in our Blend platform segment on a full year basis, growing through what turned out to be lower volumes in 2021 than 2020.”

“We have established ourselves as one of the leading vertical software platform partners in mortgage,” said Tim Mayopoulos, the former Fannie Mae CEO who joined Blend as president in 2019. “One-third of the largest banks in the country use Blend, as well as one-quarter of the largest independent mortgage originators.”

Blend processed more than 1.8 million transactions for mortgage lenders last year, which represents 38 percent growth from 2020. While they still represent only a fraction of the platform’s business, consumer banking transactions grew by 245 percent in 2021, to 300,000.

“We brought in a number of marquee names in 2021 onto the Blend platform, and not just for mortgage, and look to build on that foundation for years to come,” Ghansari said.

New clients included a top 10 bank, a top 25 bank, and “some of the largest mortgage originators that we believe will become long-term winners in the market, including Mr. Cooper and Pennymac,” helping Blend grow its mortgage market share to 15 percent, Ghansari said.

That market share estimate doesn’t include “many customers that are still in the process of rolling out Blend,” Ghansari said. In addition, he said, “we have some bigger ones that we haven’t announced yet just because we have to work with our customers on the timing of those announcements.” 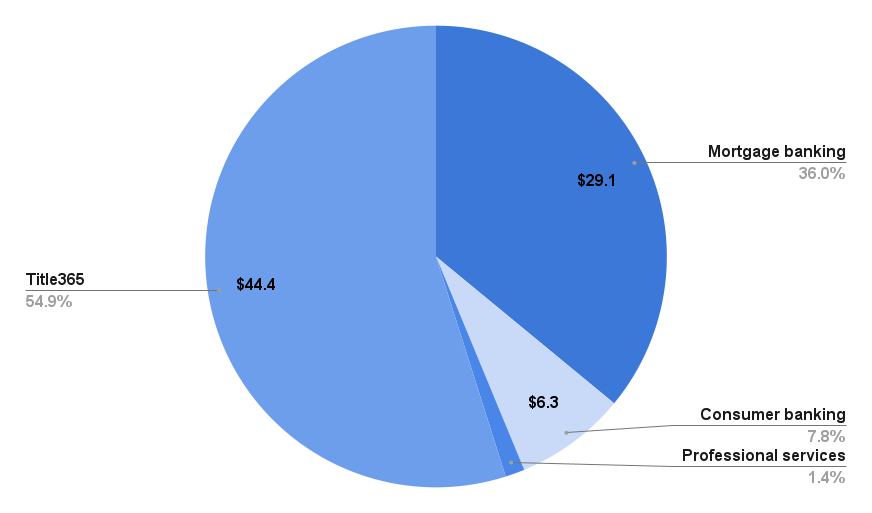 With the acquisition of Title365, title insurance is now Blend’s single biggest source of revenue, generating 55 percent of the $81 million in revenue the company reported during the fourth quarter.

But in the long run, Blend executives see title insurance as just one component of a platform providing end-to-end services to lenders and consumers.

“What I’ve experienced in this business, going back to my days running Fannie Mae, is that those companies that are clear market leaders going into the downside of the cycle emerge even stronger coming out the other side,” Mayopolous said. Lenders “know that 2022 will be a year of consolidation in the mortgage industry. If they want to be among the winners, they have to take the steps on the journey of digitizing and streamlining the mortgage origination process.”