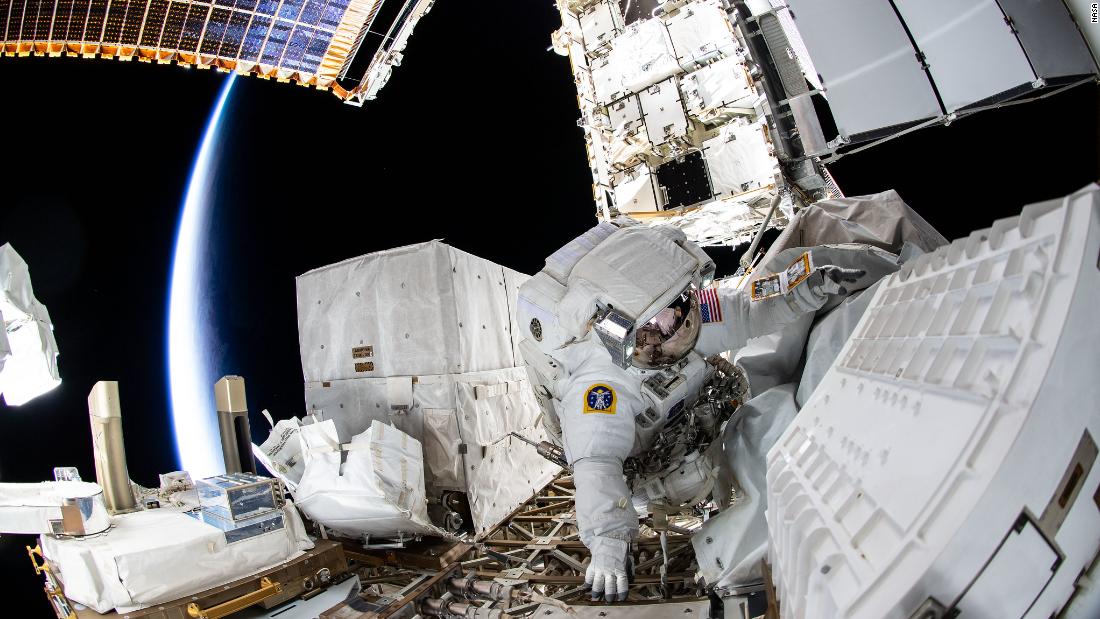 The space station is preparing for more power upgrades as two NASA astronauts conduct the first spacewalk of the year on Tuesday.

Astronauts Kayla Barron and Raja Chari will suit up and exit the space station to begin some installations around 8:05 a.m. ET. Live coverage begins on NASA’s TV channel and website at 6:30 a.m. ET, and the spacewalk is expected to last for six hours and 30 minutes.

The spacewalking duo will assemble and install modification kits that will allow for future solar array upgrades outside of the space station. Barron and Chari will install struts and brackets that will be used to support the arrival of more ISS Roll-Out Solar Arrays, or iROSAs.

Two of the iROSAs were put into place during previous spacewalks and once all of the arrays installed, they are expected to increase six of the eight power channels on the space station, kicking up the available supply from 160 kilowatts to 215 kilowatts.

Six of the solar arrays arrived at the space station on June 5 after launching on the 22nd SpaceX Dragon cargo resupply mission. The arrays are rolled up like carpet and are 750 pounds (340 kilograms) and 10 feet (3 meters) wide. Four more arrays will be delivered during a future mission.

While the current solar arrays on the space station are still functioning, they have been supplying power to the space station for more than 20 years and are showing some signs of wear after long-term exposure to the space environment. The arrays were originally designed to last 15 years.

The new solar arrays will be placed in front of the current ones. It’s also a good test for the new solar arrays because this same design will power parts of the Gateway lunar outpost, which will help humans return to the moon through NASA’s Artemis program.

The agency is preparing for a second spacewalk to take place on March 23, beginning around 8:50 a.m. ET.

Although the two crewmembers have yet to be announced, they will be responsible for conducting a number of installation upgrades, including the replacement of an external camera and placing hoses on a Radiator Beam Valve Module that routes ammonia through the station’s heat-rejecting radiators to maintain the proper temperature.

The space station is about to be a hub of activity, with a new Russian crew set to launch to the ISS on Friday, joining the four Americans, one European and two Russians already aboard.

NASA said Monday that Vande Hei will return from the ISS board a Russian Soyuz spacecraft as previously planned. The space agency sought to reaffirm Monday that it’s still working closely with Russian space agency Rocosmos on the International Space Station, despite mounting geopolitical tensions.

Vande Hei, who launched to the ISS in April 2021,will land aboard the Russian Soyuz spacecraft in Kazakhstan, as is customary. NASA officials did not say there would be any significant changes to plans to get Vande Hei back to the United States after he lands. He’ll travel home via a Gulfstream jet, as other US astronauts have before him.

For nearly a decade, Russia’s Soyuz vehicles had been the only means of getting astronauts to and from the space station. But that reliance ended after SpaceX debuted its Crew Dragon capsule in 2020, and the US regained human spaceflight capabilities.

Joint operations between NASA and Roscosmos at the Russian facilities at Baikonur, Kazakhstan, “continue to go well,” according to Joel Montalbano, the manager of NASA’s International Space Station program. “I can tell you for sure Mark [Vande Hei] is coming home” on the Russian Soyuz spacecraft, Montalbano said Monday.