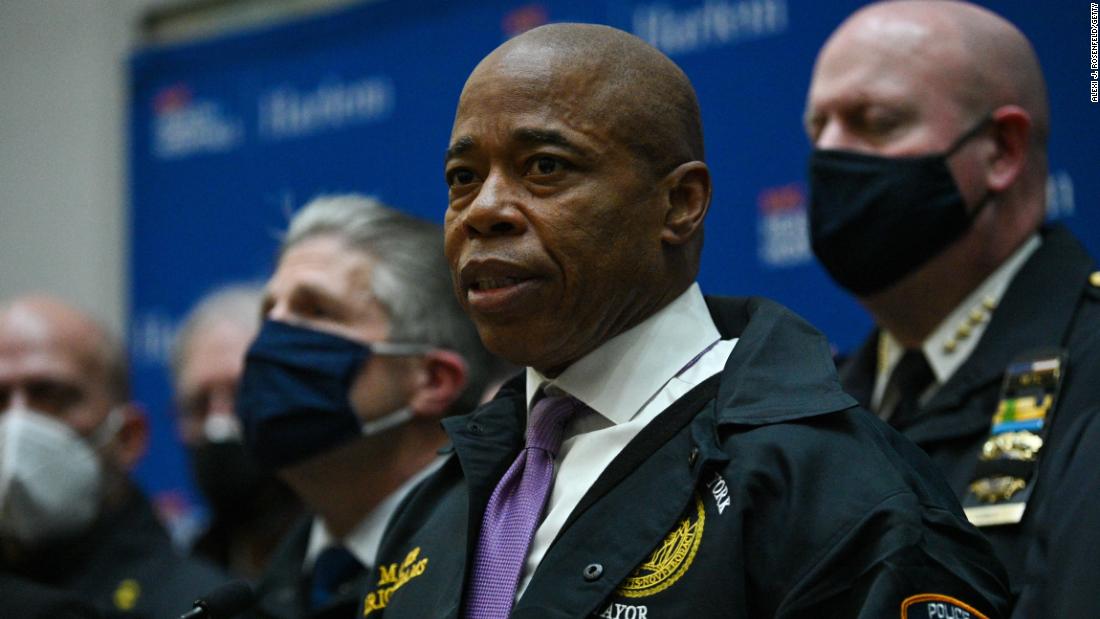 The New York Police Department tracked increases across every major crime category. The city recorded a 41% increase in overall major crime through the first months of 2022 compared to the same period last year, including a nearly 54% increase in robberies, a 56% increase in grand larceny incidents and a 22% increase in rape reports, the data shows.

“We’ve got to get it right,” Adams said Friday. “Two months in, we’re executing our plan and we’re going to defeat crime. I’m clear on that.”

As the violent crime wave continues, most of the incidents are occurring in a small fraction of the city’s neighborhoods, according to Christopher Herrmann, a professor at John Jay College of Criminal Justice and a former crime analyst supervisor with the NYPD.

“The violent crime problem isn’t spreading much,” Herrmann said. “The huge increase in hate crimes and subway crimes are all really just an increase of more people being outside.”

The city reported 85 hate crimes through the first two months of 2022, a significant increase from the 35 hate crimes reported during the same period last year, NYPD data shows.

“The men and women of the New York City Police Department are proactively addressing the deep-rooted causes of criminal behavior,” said Police Commissioner Keechant L. Sewell in a statement. “The NYPD will never relent, and the department has made far too much progress over the decades — and invested far too much in the communities it serves — to fall back by any measure. New Yorkers deserve better.”

Herrmann said the mayor and the police commissioner are tasked with driving “this really fine line between proactive policing, precision policing and not marginalizing people that are already marginalized.” He emphasized that high crime areas have already suffered the most — both in economic opportunity and increases in crime — during the Covid-19 pandemic.

NYPD officials, including Queens District Attorney Melinda Katz, held a press conference earlier this week to discuss the ongoing efforts to stop the proliferation of privately made ghost guns, which are not branded with a serial number. The department recovered 85 ghost guns so far this year compared to 20 recovered during the same period in 2021, the city said.

NYPD Inspector Courtney Nilan said that the increase in ghost guns is “alarming” as they become a daily encounter for police. Officers are recovering ghost guns in responding to domestic violence incidents, robberies involving a firearm and car stops, Nilan said.

Crime in New York reached historic lows over the past three decades before numbers started to go up in 2020, a spate that has continued over the last two years and mirrors what is being felt in big cities around the country. The number of major crimes reported in February 2022 — 9,138 — represents a 19.7% from 2020 and a nearly 47% increase from 2019, city data shows.

Since the beginning of 2022, there have been 375 transit crimes, a jump of nearly 73% compared to the same period in 2021 that recorded 217 transit crimes, according to city data. This comes as ridership in the city’s transit system continues to increase but has yet to reach pre-pandemic levels.

The Metropolitan Transportation Authority (MTA) recorded the highest ridership on March 1 since the start of the pandemic, with over 3.1 million riders on the subway, compared to just 1.7 million on the same day in 2021, MTA data shows.

The significant increase comes as Adams begins to roll out his comprehensive plan to combat crime and address homelessness in the subway system that will expand response teams of health, police and community officials across the city.

“We are days into the first part of a long-term effort to connect New Yorkers to services and set them on a path to permanent housing and stability,” Adams said in a statement on Friday. “The systemic challenges facing people experiencing homelessness and living with serious mental illness developed over decades, and will take time to fix.”

Adams unveiled the plan alongside Gov. Kathy Hochul last month, highlighting the local, state and federal resources the city will employ to combat mental health and safety amid a concerning spate of violent crime incidents occurring within the transit system.

After the city’s announcement in late February, eight violent incidents occurred in a three-day period the following weekend on various subway platforms spanning several boroughs, including at least six people who were stabbed or slashed, CNN reported.

The joint initiative involves the deployment of up to 30 inter-agency collaborative teams that bring together the Department of Homeless Services (DHS), the Department of Health and Mental Hygiene (DOHMH), the NYPD and community-based providers in “high-need” locations, the plan states.

In January, major crimes were up by nearly 38% when compared to January 2021, NYPD data shows. While there were six fewer murders in January 2022 than in the previous year, there were increases seen across every other major crime category tracked by the NYPD for the same period.

The mayor’s plan to combat gun violence in the city aims to bolster the NYPD’s efforts to fight crime with “targeted, precision policing,” focusing on the 30 precincts where 80% of the violence occurs while expanding the anti-violence Crisis Management System (CMS) to address the symptoms of gun violence, Adams said.

President Joe Biden visited New York City in February to discuss combating gun violence with state and local leaders, which included an appearance at a public school in Queens for a talk with community leaders.
The mayor resurrected the NYPD’s controversial anti-crime unit in January in response to a wave of violence during his first month in office, including a Harlem shooting that left two police officers dead after responding to domestic incident and the death of Michelle Alyssa Go, a woman who was pushed to her death in front of a Times Square subway train.

The anti-crime unit, which was disbanded in August 2020 following racial justice protests and unrest across the country, was rebranded as Neighborhood Safety Teams tasked with patrolling high-crime neighborhoods.

“We cannot rely on NYPD to arrest its way out of our ongoing increasing crime wave,” said Herrmann of John Jay College. “We need to try other crime prevention programs and develop new neighborhood and community partnerships that focus on crime prevention as a longer-term strategy.”