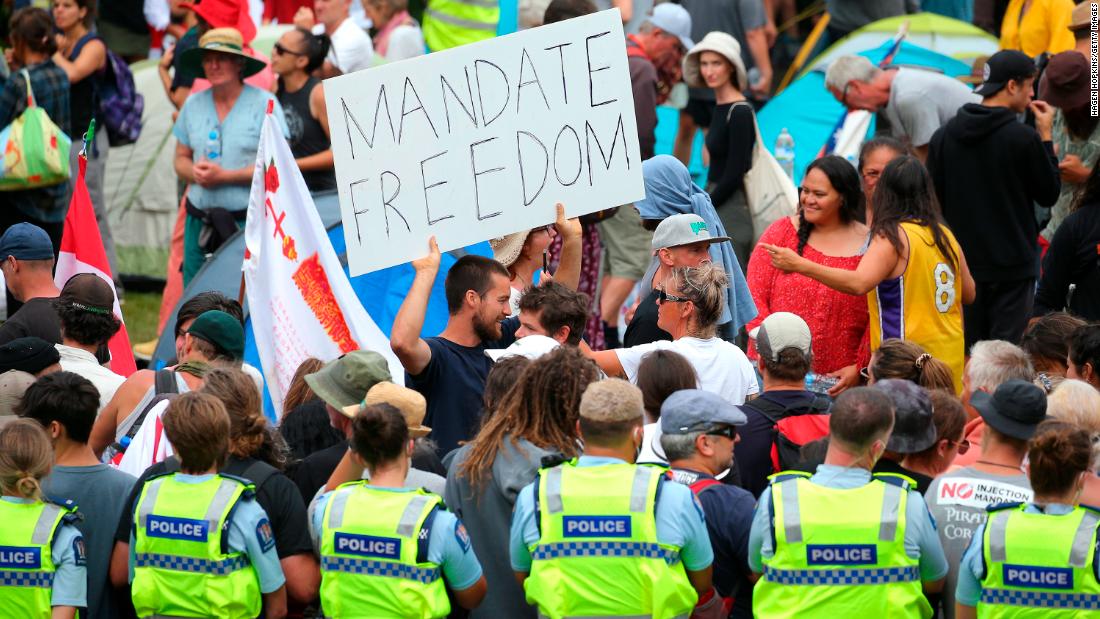 In New Zealand’s capital of Wellington, demonstrators have set up camp on the grounds of the country’s parliament and have gathered on the streets to protest Prime Minister Jacinda Ardern’s vaccine mandate, according to CNN affiliate Radio New Zealand (RNZ).
RNZ reported that the protesters responded to the music with jeers and by playing back the 1984 song “We’re Not Gonna Take It” by American band Twisted Sister, which has already been somewhat adopted as an anthem by the Canadian truckers.

The Speaker of New Zealand’s parliament Trevor Mallard is behind the playlist and has interspersed the songs with Covid-19 vaccination adverts — with many social media users on Twitter offering up suggestions, including British singer James Blunt.

Citing a BBC News article outlining parliament’s new tactic to disperse the protesters, Blunt tagged the New Zealand Police and said, “Give me a shout if this doesn’t work.”
In response, Mallard said, “we will take you up on your very kind offer,” although he joked whether it was “fair” to the police officers before adding, “I think they will be able to cope.”

RNZ said the playlist changed on Sunday morning, to include an out of tune recorder rendition of Celine Dion’s “My Heart Will Go On,” performed by Matt Mulholland and now a popular internet meme.

Mallard had asked Twitter users for their opinion on the song shortly before it was played out on the parliament speakers, and he also began playing Blunt’s song “You’re Beautiful,” with RNZ reporting the latter had been played so many times that most protesters knew the words and were singing along.

Other reports on Twitter and by local media said the power ballad “Let It Go,” from the 2013 Disney film “Frozen,” had also been played, as well as the children’s song “Baby Shark.”

Sprinklers were also previously used to disperse the protesters, but hundreds remain camped on the grounds, while RNZ said Wellington district commander Superintendent Corrie Parnell had confirmed there were around 3,000 people present over the weekend.

“Police have identified a range of different causes and motivations among the protesters, making it difficult to open clear and meaningful lines of communication,” Parnell said in a statement Friday.
Other “Freedom Convoy” protests have also taken place this weekend in Paris, which announced a ban on the demonstrations earlier in the week. Protesters in the French capital managed to temporarily block traffic and were dispersed with tear gas.

Canada’s “Freedom Convoy” began at the end of January in Ottawa as an objection to a vaccine mandate requiring truckers entering the country to either be fully vaccinated or face testing and quarantine requirements. Other protesters then joined to rail against mask mandates, lockdowns, restrictions on gatherings and other Covid-19 preventative measures.