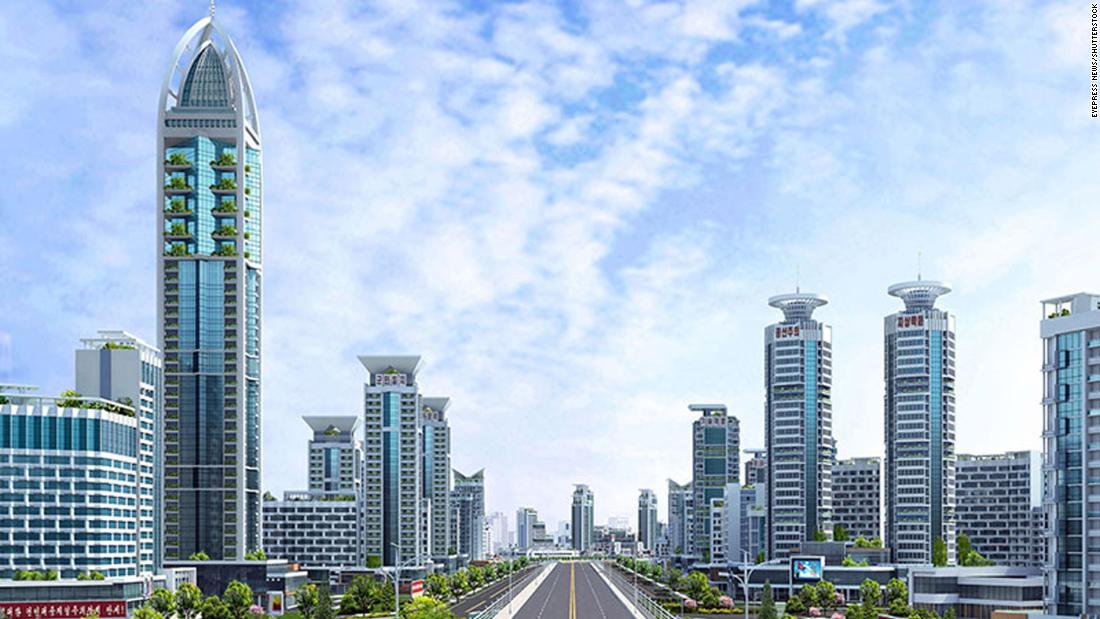 North Korea has started work on a sprawling 10,000-apartment residential project as the country embarks on a housing drive in its capital, Pyongyang.

Amid major economic woes brought about by trade sanctions and the Covid-19 pandemic, leader Kim Jong Un attended a ground-breaking ceremony at the construction site on Saturday, according to state media reports.

Though few design details have been disclosed, digital renderings of the development show towers rising on both sides of a leafy boulevard in an area of the capital called Hwasong. A larger skyscraper, which appears to be at least 40 stories tall, is also depicted in the plans.

In a speech titled “Let Us Further Glorify the Golden Age of Capital City Construction by Bringing about a Sea Change in the Hwasong Area,” Kim thanked construction workers and army personnel at the ceremony, according to Sunday’s edition of North Korea’s Rodong Sinmun newspaper. The state-run paper claimed that the project demonstrated the regime’s commitment to creating a “new world of a prosperous power where the people enjoy the highest dignity and the best happiness.”

The development forms part of a wider housing drive that has seen the government promise 50,000 new homes in Pyongyang before the end of 2025. But the pledge, announced at the Workers’ Party of Korea Congress last year, comes as North Korea grapples with sanctions over its nuclear weapons program and plummeting trade with its closest ally, China. The country’s economy has been in freefall since 2020, when Kim’s government closed its borders due to Covid-19, though rail freight transport has resumed as of last month.

In a rare admission of the country’s challenges, Kim’s rubber-stamp parliament, the Supreme People’s Assembly, said last month that it was working to improve livelihoods in light of “difficult and complicated problems,” according to North Korean state media. North Korea also has a long-standing housing shortage, with some studies suggesting that the country only has enough homes to accommodate 70% to 80% of its households.

A 3D visualization of the development shows a tall skyscraper on the left, with other towers lining a wide street. Credit: EyePress News/Shutterstock

Yet, construction projects continue to be used in state propaganda to promote the government’s achievements.

A documentary broadcast in North Korea last month, titled “The Great Year of Victory 2021,” showed Kim visiting a construction site alongside images of an 80-story skyscraper and a large apartment district. Work at Hwasong began just days before the country marks what would have been the late former leader Kim Jong Il’s 80th birthday.

The new development is one of several high-rise projects announced in recent years in Pyongyang, where residents enjoy a significantly better quality of life than anywhere else in the country.

Related video: How North Korea creates the fantasy of prosperity through design

According to data from the Council on Tall Buildings and Urban Habitat, there are currently 15 completed buildings standing 150 meters (492 feet) or above in the North Korean capital. Among them are four of the towers built at Ryomyong New Town, a showpiece luxury residential area opened in Pyongyang in 2017. And state media reported in January that work was almost complete on 10,000 newly built housing units in the Songsin and Songhwa districts of eastern Pyongyang.

The country’s official Korean Central News Agency (KCNA) has previously boasted about so-called “Pyongyang Speed,” claiming to have completed the frame of a 70-story skyscraper at Ryomyong New Town in just 74 days. But some experts have raised concerns about the quality of construction materials, as well as the level of technical know-how and the pace at which work is sometimes carried out.

In 2014, an apartment building that may have housed dozens of families in Pyongyang’s Phyongchon district collapsed, an incident for which no official death toll was ever released.

KCNA later attributed the disaster to “sloppy building” and “irresponsible supervision of officials.”

Other construction projects in the capital meanwhile stand unfinished — like the Ryugyong Hotel, which reached its planned height of 1,083 feet in 1992 but remains unoccupied following decades of unspecified delays. The 3,000-room hotel is among the world’s tallest unfinished buildings.