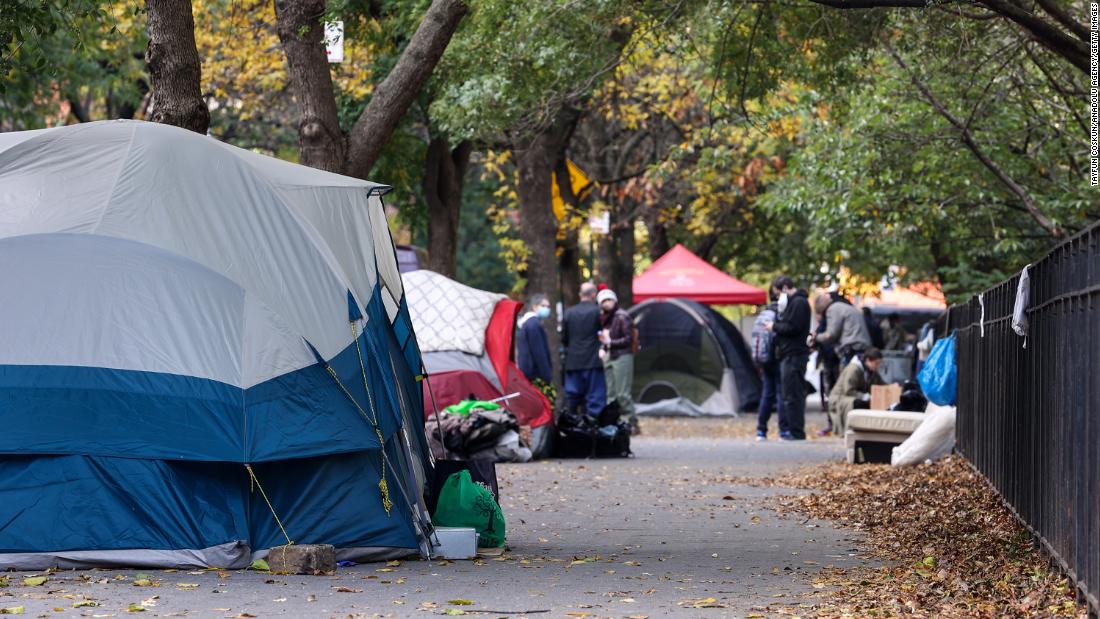 City officials will work to eradicate makeshift sites on city streets and in the subway system and place homeless people in shelters where they will access services for mental health, medical needs and housing, the official told CNN in an interview on Saturday.

The official said more than 150 such encampments all over the city have been identified as locations the city wants to clean up.

The first notices about the effort were posted on Thursday and visits took place on Friday, when homeless people were given a 24-hour notice to clear out the sites.

“This effort is about taking care of our people and our public spaces because no New Yorker deserves to live on the street,” Adams said. “We are breaking down silos and working together across government to keep New Yorkers safe and our streets clean. These are basic expectations we have for our city, and we are going to deliver.”

The city is making an average of 650 engagements per night, the official told CNN. During the first week of the plan, 22 people expressed willingness to be placed in shelters, the official said.

Between February 21 and March 20, 312 people were placed in shelters and provided with services, according to the official.

“When all sites have been addressed in this initial phase, the work of the task force will continue with the next phase, which will include a reinspection process, followed by a recanvassing of the five boroughs to identify any new encampments,” the official said.

But the plan is already facing opposition from some homeless advocates, such as the Coalition for the Homeless.

“Once again, Mayor Adams is demonstrating his lack of understanding of unsheltered homeless New Yorkers,” Jacquelyn Simone, policy director for the advocacy organization, said in a statement to CNN on Saturday.

“His administration has no plan to provide safe, single rooms where they can stay inside, and is relying instead on the tired and cruel old tactic of chasing those without shelter out of Manhattan.”

Officials with Adams’ administration told CNN earlier Saturday they believe shelters are far safer than living on the subways or the streets.

During an appearance Saturday afternoon, Adams addressed the concerns from homeless advocates who oppose his administration’s approach, who argue the city has a shortage of safe and available shelters.

“There are 8.8 million people in this city and 30 million opinions, but there’s one mayor,” Adams said, adding shelters are “extremely safe” for people who are homeless.

The effort is part of the first phase of what Adams has dubbed a comprehensive safety plan to combat crime and address homelessness that will expand response teams of health, police and community officials across the city.

The joint initiative, which began last month, calls for the deployment of up to 30 inter-agency collaborative teams that bring together the Department of Homeless Services; the Department of Health and Mental Hygiene; the NYPD; and community-based providers in “high-need” locations, the plan states.

The new efforts come as crime in the city, particularly in its transit system, has garnered national attention.

On Saturday, Adams said he does not “subscribe to the theory” unhoused people should not be allowed to continue to live in dangerous and inhumane conditions such as makeshift shelters, cardboard boxes or subway stations.

While not mentioning names, Adams did not refrain from taking a jab at his predecessors whose administrations, Adams said, ignored such derelict conditions.

“I’m just very clear: people are not going to live in makeshift dangerous housing,” Adams said. “We should have never allowed that to happen.”