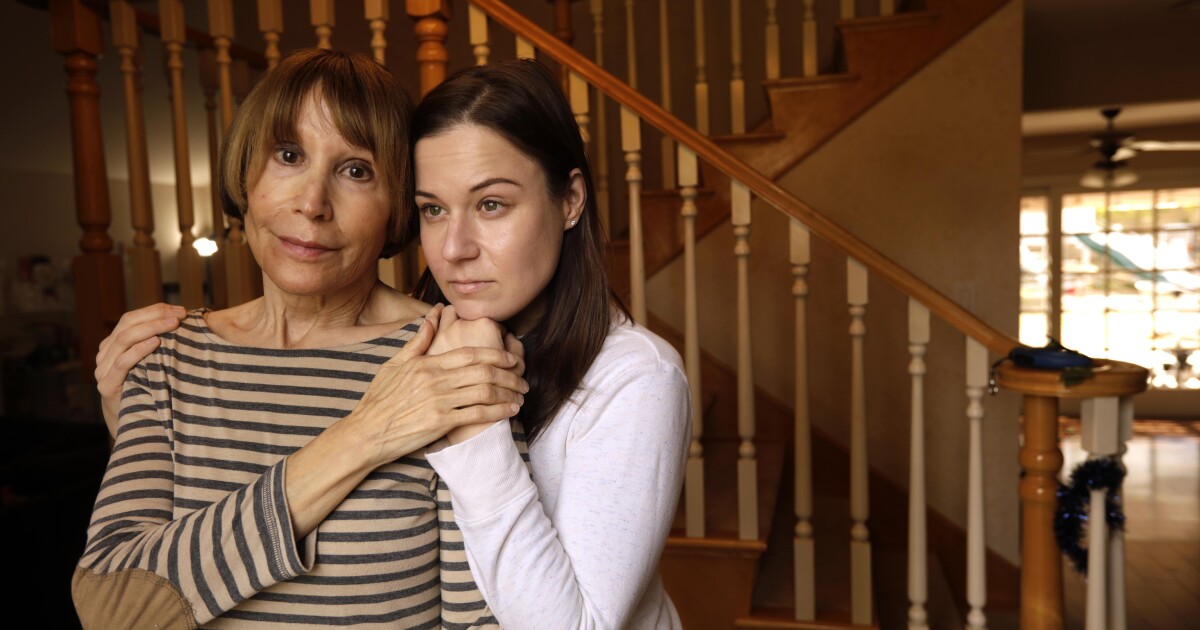 Rose Liebermann opened her property tax bill and did a double take.

The $15,584 she owes on her new West Hills home was almost four times as much as the taxes on her previous house in Granada Hills where she had lived for more than 30 years.

It wasn’t supposed to be that way. Proposition 19, narrowly approved by California voters in 2020, gives older homeowners a property tax break when they move. Specifically, it allows those 55 and older to blend the taxable value of their previous home with the value of a new, more expensive home they purchase, resulting in significant property tax savings.

But processing delays at the Los Angeles County assessor’s office have left property owners like Liebermann facing hefty tax bills that must be paid while they wait for their applications to be approved.

Nearly a year after the law took effect, the assessor’s office has not completed any of the 1,271 applications it has received to recalculate the property taxes for older and disabled homeowners under the law, according to the agency. And it hasn’t finished any of the nearly 3,700 applications for parent-to-child and grandparent-to-grandchild inheritances, the other major piece of the tax measure.

Liebermann moved last summer because she wanted to help her daughter, Natasha Gershon, who is divorced and raising two young children, including a 10-year-old son with autism. Believing the tax measure would make it possible for her to afford a nicer place, Liebermann decided to buy the larger single-family home in West Hills where they all could live.

Liebermann has since borrowed money through a refinance loan to help pay the property tax and to build an accessory dwelling unit for herself.

“My mom didn’t have to do this,” said Gershon, 36. “She sold her house and put off her retirement to make sure her grandkids didn’t have to worry about having a roof over their heads.”

Liebermann said she has called the assessor’s office to inquire about the status of her application for tax relief and was repeatedly told that the office was short-staffed.

“Seniors are being penalized for [the assessor’s] inadequacies,” she said. “If I pay my taxes late, I have to pay a fine. But is there no responsibility or consequences on their end? There should be something to allow for people’s lives to not be so devastated financially.”

L.A. County Assessor Jeffrey Prang said his office needed at least a year to update its technology to implement the tax measure after it was passed, but the law gave assessors only several months to do so.

The original ballot language was unclear, so the assessor’s office helped draft legislation to clarify the law, he said. That legislation was passed and signed by the governor last fall. Without clear guidance on how to administer Proposition 19 for most of last year, applications piled up, he said.

Prang said his office hopes to begin processing applications in the coming weeks, but it will likely take months to get through the backlog. His office has been receiving more emails and phone calls recently from frustrated property owners like Liebermann, he said.

“I’m really sorry,” Prang said. “It really bothers me that people have to deal with these sort of inconveniences, in some cases, hardships. They shouldn’t have to do that. If I had the ability to make that go away today, I would.”

But his office doesn’t have such authority under state law. Neither does L.A. County Treasurer and Tax Collector Keith Knox, who said his office cannot defer or reduce property taxes until the assessor’s office approves the transfers. Taxpayers will receive a refund once the assessor does so, he said.

The state controller’s office offers a tax postponement program that allows older homeowners to defer property tax payments if their household earns less than $45,810 annually and have at least 40% equity in the home. But that wouldn’t help Liebermann.

No agency is tracking the backlog of Proposition 19 applications across the state, but other county assessors are facing similar challenges as in L.A. County, said Leslie Morgan, president of the California Assessors’ Assn.

“I do believe we’re going to take the bulk of the blame in terms of the timing of it and people being upset about getting tax bills,” said Morgan, who is the assessor of Shasta County. “I think that’s just something we’re used to, though. We understand that we need to navigate those conversations with our taxpayers.”

Before Proposition 19’s passage, older homeowners had a one-time opportunity to retain their existing tax amount if they moved to a home of equal or lesser value within the same county. They could do the same when moving between Los Angeles and nine other counties. If they didn’t meet those requirements or moved to a more expensive home, they would have had to pay the full amount in property taxes.

Under the new law, older homeowners receive a property tax benefit when they buy a more expensive home anywhere in the state — up to three times. Homeowners with disabilities can do the same, and victims of wildfires and other natural disasters are able to do so when they move from damaged homes.

Proposition 19 also restricted an inheritance property tax break that allowed the children of homeowners to keep their parents’ low property tax assessments. A 2018 Times investigation found a large number of inherited homes along the coast that are used as investment properties.

As part of the measure, children who inherit their parents’ houses will no longer receive a property tax break if they intend to keep it as a second home or rent it out.

Back in West Hills, the tax hike continues to cause a lot of stress for Liebermann. Once her application is approved, she will likely owe about half of her current tax bill.

“At this stage of my life, it’s not what I was imagining,” she said. “But I’m so glad that I can do it for my daughter and her kids. I would do anything for them. So I don’t regret it, but I just would like to sleep at night, that’s all.”