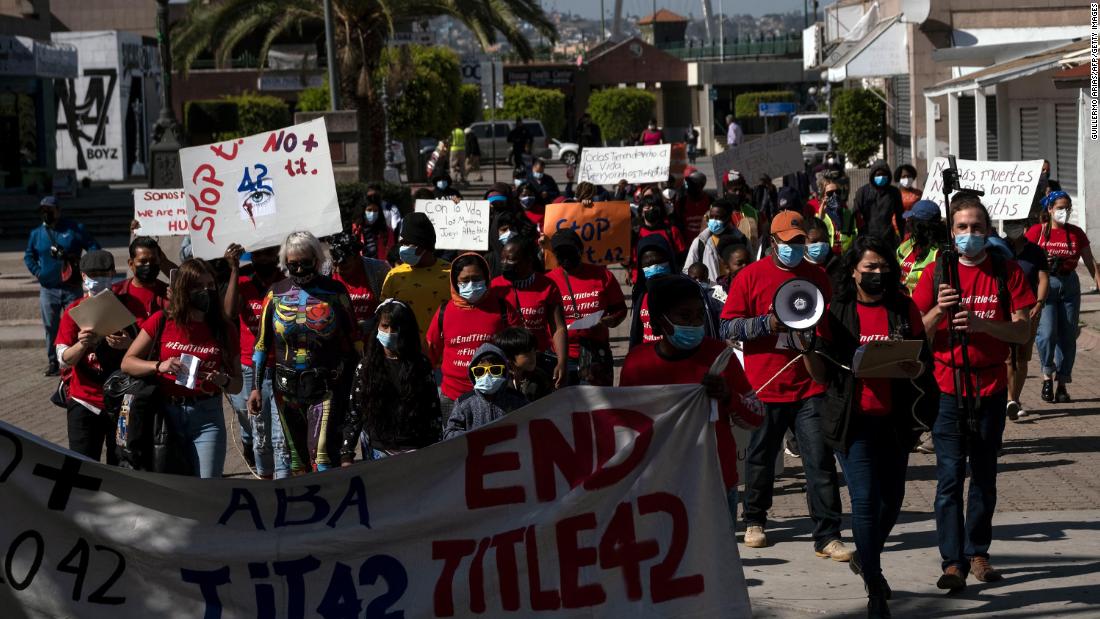 White House communications director Kate Bedingfield previewed the policy change during a briefing on Wednesday, telling reporters that the move is being made at the recommendation of top federal health authorities.

“This is a decision we have long deferred to CDC (Centers for Disease Control and Prevention),” she said. The CDC, saying it conferred with the Department of Homeland Security, announced the change would go into effect at the end of May.

It’s past time to say good riddance to Title 42: It was bad policy during the Trump administration, and it has been bad policy under Biden. Title 42 is legally questionable and morally indefensible. Its use put migrants in danger under the dubious justification of public health.

Title 42 is part of a 1944 health law that prohibits the entry of people into the US when there is a “serious danger to the introduction of [a communicable] disease into the United States.” The Trump administration invoked the policy in March 2020, when the Covid-19 virus was rapidly spreading throughout the country and around the world, and when there was no vaccine in sight. Since then, US Customs and Border Protection statistics show that 1.7 million migrants have been sent back across the southern US border to Mexico, or repatriated to their country of origin.
From the start, Trump’s invocation of Title 42 was driven by politics, not by legitimate health concerns. In fact, when the Trump administration sought to implement the law, the CDC doctor who oversaw the regulation refused to comply.
Instead, then-Vice President Mike Pence used his authority to issue an order closing the borders to migrants. Olivia Troye, a Pence adviser at the White House who later said she resigned over the Trump administration’s handling of Covid-19, denounced the measure as a “Stephen Miller special” — a reference to a senior Trump former advisor notorious for his extreme anti-immigration stance.
Title 42 was always a border control measure masquerading as public health policy. Covid-19 was already rampant in the US by the time the policy went into effect, and the law was never applied to air travelers or US citizens crossing the border. It was only used as a pretext for keeping out migrants who were mostly brown, Black and economically vulnerable.
Dr. Anthony Fauci, director of the National Institute of Allergy and Infectious Diseases, has said that expelling migrants “is not the solution to an outbreak.” Meanwhile, an article in last month’s New England Journal of Medicine found that there “is no public health evidence that singling out asylum seekers or other migrants …is effective in stemming the spread of Covid-19.”

In addition to being immoral and ineffective, the use of Title 42 as a border control measure is also probably illegal.

Under US law, asylum-seekers have the right to make their claims for humanitarian relief. The US is a signatory to international agreements that recognize similar rights for refugees. Title 42 trampled on these rights by allowing immigration authorities to expel migrants without providing them with an opportunity to make their asylum cases. In 2021, the UN High Commissioner for Refugees called on Washington to lift Title 42, so that migrants could access the asylum process, “in line with international legal and human rights obligations.”

Part of what made Title 42 so morally reprehensible is that it placed thousands of migrants in harm’s way. A 2021 research team for Physicians for Human Rights found that people expelled under the measure were subjected to violence once they were returned to Mexican border cities. And Title 42 has been applied inconsistently: Refugees from Ukraine have been allowed to claim asylum at the border, while those from Haiti have been expelled and sent back to unsafe conditions at home. This glaring double standard is simply unacceptable.

Now, with Covid-19 restrictions being lifted across country, there’s even less justification for continuing to keep Title 42 as US policy. For all these reasons, the rescission of Title 42 cannot come soon enough.

Republicans will seize on this move by the Biden administration as evidence of “an open borders” policy. They will paint doomsday scenarios of migrants crossing the border. Yet GOP lawmakers have never offered any constructive immigration or asylum solutions of their own. They prefer to drone on with talking points about Biden’s so-called border crisis.

What this country is really confronting is decades of neglect and mishandling of US immigration policy by successive presidential administrations.

True, there is a backlog of migrants desperate to enter the US, and a great number of them will likely cross the border once Title 42 is rescinded. But that doesn’t mean we should fear or demonize them. The Biden administration is already working on contingency plans to prepare for the anticipated increase in border arrivals.

Two additional solutions might be for Homeland Security to hire more civilian personnel to staff processing centers, and to partner with nonprofits that specialize in caring for vulnerable people. This will free Border Patrol officers to focus on their primary mission of securing the border, and will help ensure that migrants are treated with the compassion that they need and deserve.

The US has a legal obligation to help people fleeing danger and persecution. Now that the Biden administration is taking the long overdue step of lifting Title 42, the US can finally rebuild an asylum system that honors due process and respects human dignity.