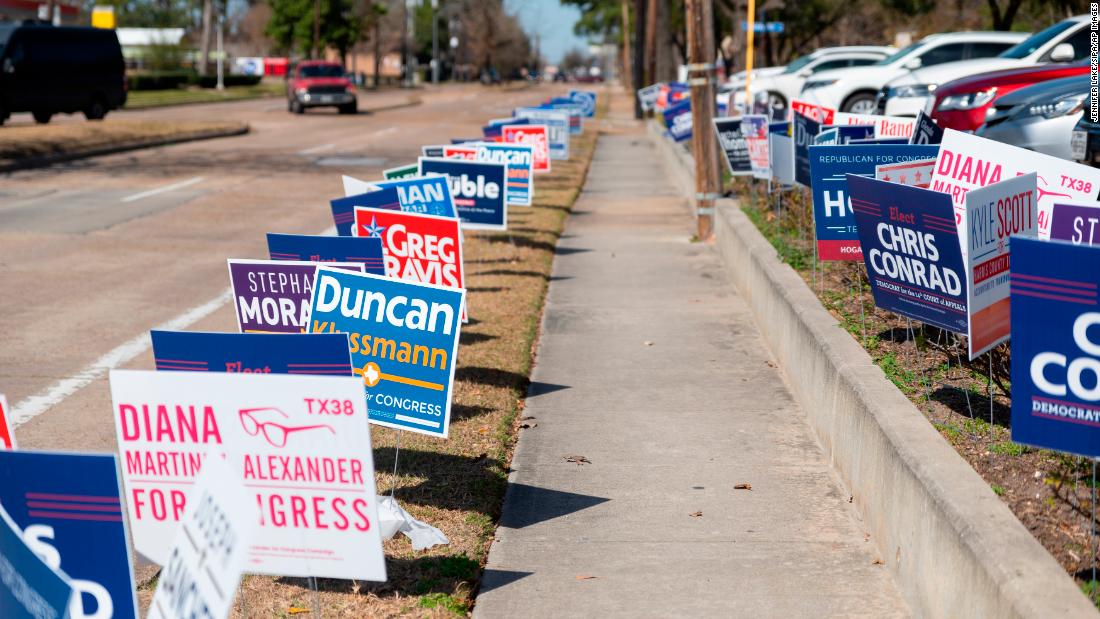 Many of the Republican primary candidates running for statewide positions are repeating former President Donald Trump’s lies that Joe Biden stole the 2020 election.

Perpetuating this lie might be key to maintaining electoral viability in the Texas GOP, especially since polling indicates that Republicans overwhelmingly think Biden is an illegitimate president. According to a recent online survey by The Texas Politics Project at the University of Texas, 67% of the state’s Republicans believe Trump won, along with 33% of independent voters.
GOP primary candidates in Texas are also displaying an alarming fealty to Trump as they clamor for his approval and fight among each other to pander to his supporters. Few high-profile Texas politicians have publicly stepped back from the former president’s claims or his ideologies.
In the Republican race for state attorney general, the incumbent Ken Paxton is facing off against Land Commissioner George P. Bush, former Texas Supreme Court Justice Eva Guzman and Rep. Louie Gohmert. Paxton is currently the frontrunner, despite a securities fraud indictment dating back to 2015 that remains unresolved. He also faces allegations of bribery and corruption from his former staffers. (Paxton, who has sought to cast the accusations from his staffers as sour grapes, denies any wrongdoing.)
In 2020, the embattled attorney general filed a failed lawsuit to challenge Biden’s election victory — a move that probably helped Paxton endear himself to Trump, who endorsed him over Bush.
In a sad display of desperation, Bush, the heir to the family’s political dynasty, tried to cozy up to Trump to earn his favor — even though the former president had publicly insulted his parents.
It didn’t work. And now, without Trump’s endorsement, Bush seems to be settling for the next best thing — engaging in an argument with Guzman over who most supports Trump’s favorite project, the border wall. Endorse Trump’s policies even though he won’t endorse you? There’s a tactic that shows the fight among candidates to out-Trump each other.
The dispute between Bush and Guzman is a blatant attempt to pander to Trump’s far right supporters — especially since the Texas attorney general has no authority to fund or build a wall, on the border or anywhere else in the state.
Meanwhile, Paxton has launched attacks on Gohmert, who pushed Trump’s lie that the 2020 election was stolen in a lawsuit against former Vice President Mike Pence. Paxton’s strategists likely view the US congressman, a latecomer to the race, as a threat who can draw away primary voters and force a runoff.
The political posture of the Texas governor might be just as confounding in the runup to the primary elections. Gov. Greg Abbott has Trump’s endorsement, but the imprimatur of his party’s leader has not shielded him from angry Republicans in Texas. Abbott was loudly booed and called names at a recent Trump rally in East Texas last month.
The obvious conclusion is that the man who led the fight for an extreme anti-abortion law and militarized the border is not conservative enough for many Trump supporters. His two most viable primary opponents, former State Sen. Don Huffines, and former GOP Texas chairman Allen West, are running to Abbott’s right as some call the governor a RINO (Republican in Name Only).
The risk for Abbott is that the Trump backing might not protect him from a runoff. Primary turnout is historically small, and early voting this year is “abysmally low” in some areas. This could leave Abbott vulnerable to opponents who are accusing him of not being bold enough on the border while being too tough on Covid (even though Abbott tried to ban mask mandates and threatened to fine local officials and businesses that tried to enforce them).
Nonetheless, Abbott is likely to win the majority needed to avoid a runoff, but if he comes close to 50%, failed Trump mojo may take the blame as much as getting assailed from the right for not being sufficiently conservative.
Trump has even gotten involved in the GOP primary for Texas agriculture commissioner. He endorsed the incumbent Sid Miller before his political consultant Todd Smith was indicted for selling hemp licenses at kickback prices to farmers. (Smith has denied wrongdoing, and Miller cut ties with him, although he said he did not think Smith had done anything wrong).
Despite numerous controversies, the former champion rodeo cowboy — who Trump once considered for his Agriculture Secretary — still has a good chance to win his primary without a runoff, even though polls show a significant number of undecided voters.

But doesn’t the Texas GOP primary sound like a bad Netflix series?

Still unknown is what impact Trump-inspired voter suppression laws will have on the GOP primary. The state’s largest counties are rejecting mail-in ballots at record rates, with some turning away as many as 46%. Critics say the added ID requirement is designed to stifle turnout, which could harm both parties. The conservative-controlled Texas legislature says the changes are intended to protect election integrity, a problem the state simply does not have.

The energy Texas politicians are wasting on pleasing an extremist former president might be more wisely spent on confronting the state’s many troubling issues. A short list includes the closing of rural hospitals, dramatically increasing real estate costs and property taxes, the banning of books, billions of tax dollars spent on police and soldiers at the border and failing infrastructure. Texas Republicans need to spend more time on those challenges and not the manufactured crises of Donald Trump.