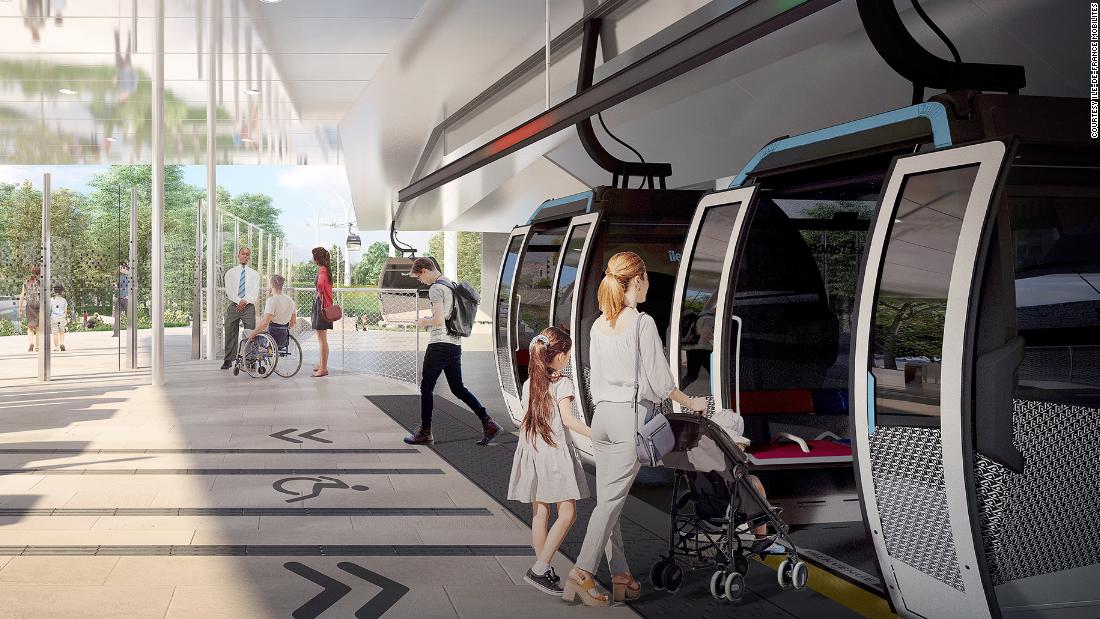 (CNN) — Paris is already home to some of the most popular attractions in the world, and the French capital could be about to get its very first urban cable car.

Proposed plans for a brand new 4.5 kilometer-long aerial tramway connecting various suburbs in the southeast to the Paris Metro are pressing ahead, with construction expected to begin this year.

Scheduled to open in 2025, the “Cable 1” project will travel from the Parisian suburb of Villeneuve-Saint-Georges to the Pointe du Lac station in Creteil in the Île-de-France region within just 17 minutes, less than half the time the journey would take on a bus.

Renderings for the cable car line, helmed by architecture studio Atelier Schall, have just been released, providing a closer look at the much-anticipated project, which recently cleared pre-construction feasibility studies.

A rendering of Cable 1, a proposed new cable car system set to open in Paris by 2025.

Cable 1 (C1) has an estimated price tag of €132 million (around $145 million) and is expected to serve around 11,000 people a day, with just 30 seconds between cabins at peak times. Each cabin will have room for up to 10 passengers.

While French cities like Brest and Grenoble already hold similar cable car systems, Cable 1 would be the first for Paris if its approved. However, several other proposed aerial tramways are currently in various stages of development.

First proposed in 2008, Cable 1 was considered necessary due to the hilly terrain of Creteil, which also holds a high speed train line and a motorway, making alternative overground travel systems less practical.

The Cable 1 project will travel from Parisian suburb Villeneuve-Saint-Georges to the Pointe du Lac station in Creteil, located in the Île-de-France region.

In order to build the system, 33 white pylons, devised to “blend harmoniously” into the landscape, will be put up along the suburbs.

A rendering of Bois Matar station in Villeneuve-Saint-Georges, which would be one of the five stops on the line if all goes to plan.

“The great proposal of the group led by Doppelmayr France will allow, in just over four years, more than 11,000 people per day to save a lot of time, a lot of comfort and perhaps, to dream a little in the mountains.”

Cable 1 will serve five stops in total, Temps Durables and Emile Combes in Limeil-Brévannes, Emile Zola in Valenton and Bois Matar in Villeneuve-Saint-Georges, with the terminus at Pointe du Lac in Créteil, located a short distance from metro line 8.

The 4.5-kilometer-line will have the capacity to serve around 1,600 passengers per hour.

Every station will be just one-story high in order to ensure the system is “100% accessible” for passengers.

Paris isn’t the only European city introducing a cable car system. Last year, Amsterdam gave the green light to a 1.5 kilometer-long cable car that will travel across the IJ river, linking Amsterdam-West and Amsterdam-Noord when it gets up and running in 2025.

In London, a cable car built across the Thames river has struggled to attract regular passengers since opening in 2012, and only managed to avoid draining city transport finances because of a lucrative sponsorship deal that is soon to expire.