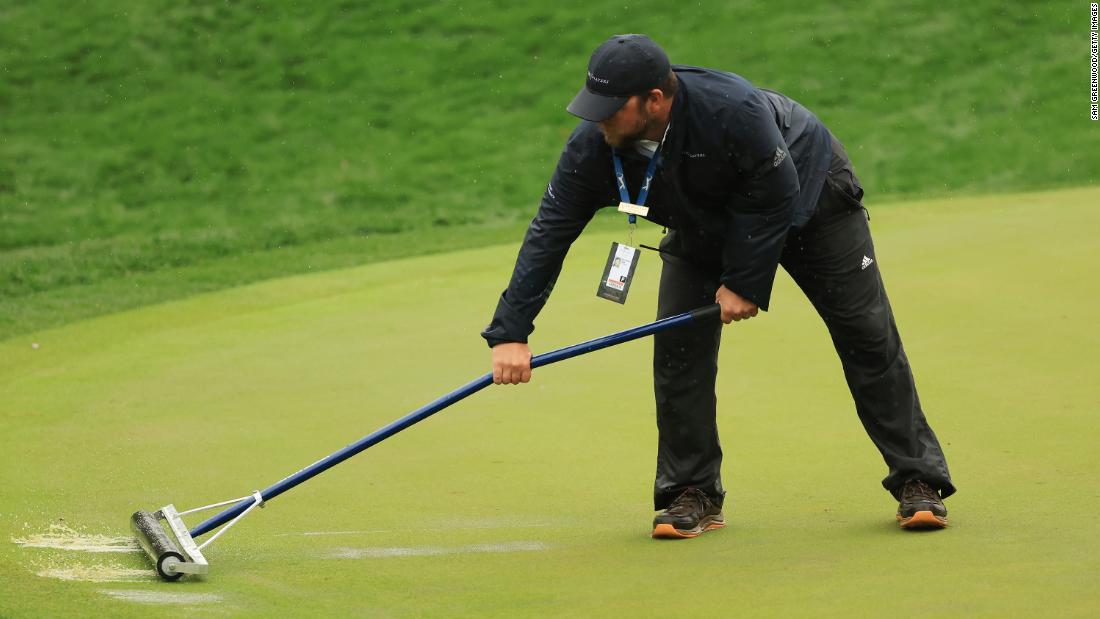 Play at Ponte Vedra Beach’s TPC Sawgrass course has faced severe disruption since the tournament got underway on Thursday, with almost three inches of rainfall across 48 hours.

Approaching what would typically be the tournament’s penultimate day on Saturday, 47 players are yet to complete their first round.

Florida is currently under tornado watch until 11 a.m. E.T Saturday — the earliest time the Tour said play will resume — with possibilities of tornadoes, winds of up to 70 mph, and heavy rain the key concerns, according to CNN weather’s team.

Flooding caused by additional rain could be particularly disruptive for grounds staff at The Players — nicknamed ‘the fifth major’ for its prestige — and looks set to extend the tournament to, at a minimum, its first Monday finish since 2005.

“Unfortunately, the weather conditions are not providing us any relief,” Chief Referee Gary Young said on Friday.

“Our desire is to not have anyone on the property at that time,” added Young, referring to the projected severe weather system on Saturday. “We are into a Monday finish. We know that.”

The rain and severe storm threat will have passed by midday Saturday, according to the CNN weather team, though temperatures will plummet and strong winds of up to 40 mph look set to prolong difficulties for golfers.

On the eve of the tournament, Young said organizers were “confident” in their ability to navigate bad weather, yet issues began also immediately when overnight rainfall delayed the start by an hour.

Play was resumed only to be later suspended for over four hours due to dangerous weather, Thursday ultimately concluding with 69 players — less than half the field — completing their first round.

“The golf course has reached a point where it’s unplayable,” Young said Friday.

England’s Tommy Fleetwood sits level with US pair Tom Hoge and Brice Garnett at six under heading into the eventual restart.

Fleetwood, one of the 69 players able to finish their first round on Thursday, has gone two years without a victory, but made an excellent start with three straight birdies after the delay.

“I’m chuffed to be in on that score,” Fleetwood said Thursday.

“I felt like I drove the ball well aside from a couple, and I felt like I chipped and putted great. For sure, that was the most I could have got out of the round. So days like that are very, very pleasing.”