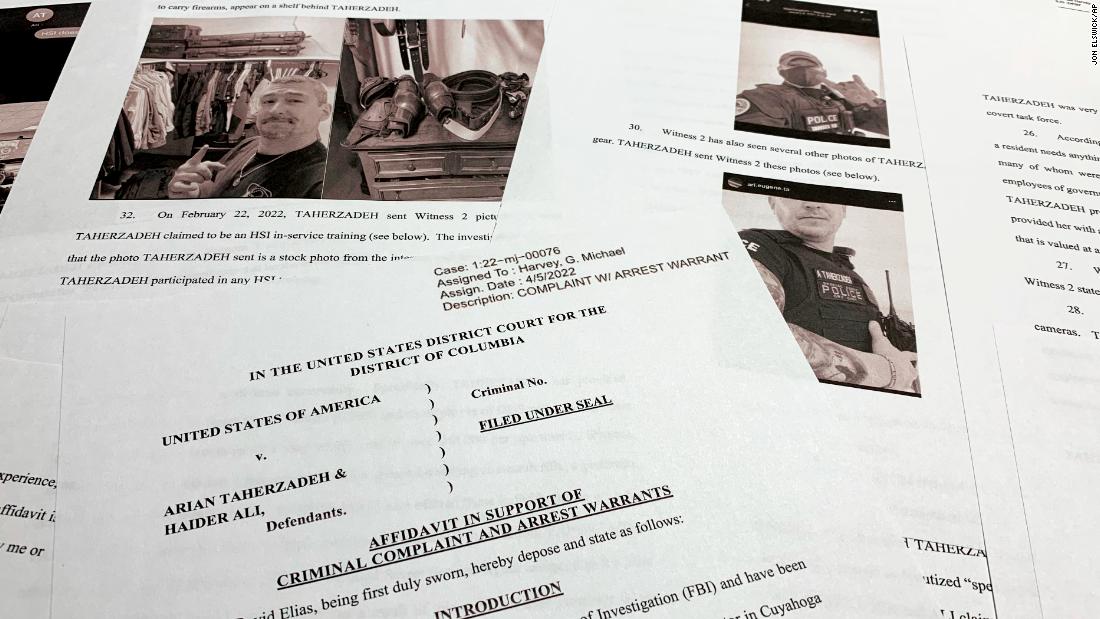 “The Defendants were not merely playing dress-up,” prosecutors wrote in the memo filed on Friday. “They had firearms, they had ammunition, they had body armor, they had tactical gear, they had surveillance equipment.”

Taherzadeh and Ali were arrested earlier this week and charged with impersonating Department of Homeland Security agents for more than two years. They gave expensive gifts to federal agents and provided them apartments in Washington, DC, according to the detention memo. Taherzadeh allegedly offered to purchase a $2,000 assault rifle for a Secret Service agent on the first lady’s protective detail, according to an affidavit.

Prosecutors have not provided an alleged motive or the purpose of the fake operation, nor have authorities identified a source of the money that funded it. The two men will appear at a detention hearing Friday, and prosecutors have indicated in court that they may add additional charges for “conspiracy.”

“Neither Defendant is even employed by the United States government. But their impersonation scheme was sufficiently realistic to convince other government employees, including law enforcement agents, of their false identities,” prosecutors wrote.

After their arrest, prosecutors say Taherzadeh told investigators that Ali funded most of their day-to-day operation but Taherzadeh said he did not know where the money came from.

The pair were also in possession of “immigration documents for a number of individuals,” according to the memo from prosecutors, and had significant access to information about other tenants in the Washington, DC, apartment complex where they and a number of law enforcement officials resided, including the electronic access codes and a list of each tenant.

In addition, prosecutors said the pair had a machine to make “Personal Identification Verification” cards as well as passport photographs. Witnesses saw Taherzadeh with a PIV card he used to log in to his laptop that had a “DHS” label on it, according to the memo.

Taherzadeh had multiple copies of his driver’s license and various ID cards, and Ali had traveled to Iran and had two visas from Pakistan and one for travel to Egypt.

According to the memo, Taherzadeh and Ali were stockpiling weapons and law enforcement equipment in multiple apartments they leased in a DC apartment complex. In one apartment, which investigators said was used for storage, investigators found a loaded Glock 19 handgnu and a Sig Sauer handgun, parts to a long gun, scopes, and multiple rounds of ammunition.

In other apartments, investigators discovered surveillance equipment, including 30 hard drives, hard drive copying equipment and a “high-end drone,” as well as clothing with police insignia, police parking placards, a latent fingerprint kit and a lock picking kit, according to the detention memo.

Taherzadeh pleaded guilty to misdemeanor assault and battery of his wife in Virginia court in 2013, prosecutors noted, and is prohibited from owning firearms.

Neither Taherzadeh nor Ali has entered a formal plea.