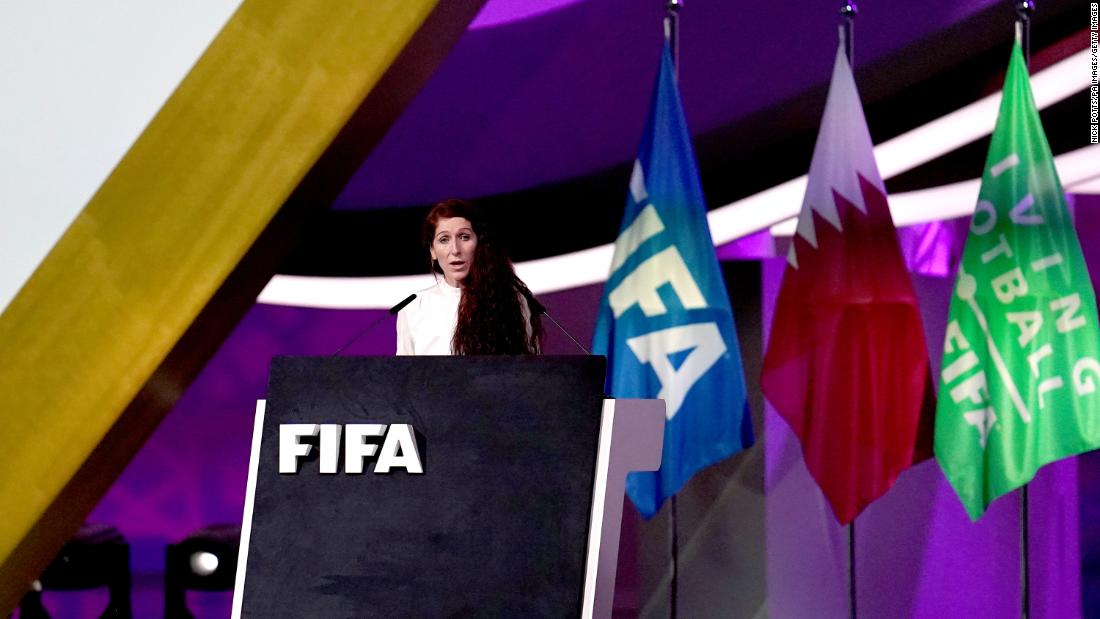 Klaveness’ comments came just a day after worldwide players’ union FIFPRO and a global trade union federation published an open letter that criticized Qatar for continued poor working conditions for migrants in the run-up to December’s tournament, even as it noted some “encouraging signs of progress.”

A former player for the Norwegian national team and the country’s first ever female football president, Klaveness said the sport’s “core interests” were disregarded when Qatar won the bid in 2010.

“Human rights, equality, democracy: the core interests of football were not in the starting 11 until many years later,” Klaveness told the delegation in Doha, Qatar’s capital.

“These basic rights were pressured onto the field as substitutes mainly by outside voices. FIFA has addressed these issues, but there is still a long way to go.”

Questions have been continuously raised concerning human rights issues in Qatar ahead of the tournament, especially over the treatment of migrant workers and the LGBTQ+ community.

The Guardian reported last year that 6,500 migrant workers had died in the country in the ten years following Qatar’s successful bid to host the tournament in 2010, most of whom were involved in low-wage, dangerous labor, often undertaken in extreme heat.

The report — “categorically” denied by tournament organizer chief executive Nasser Al Khater — did not connect all 6,500 deaths with World Cup infrastructure projects and has not been independently verified by CNN.

With homosexuality illegal and punishable by up to three years in prison, the only current, openly gay player in men’s top-flight football Josh Cavallo said in November that he would be “scared” to play in Qatar.
In response to the Australian’s fears, Al Khater told CNN that he would be “welcome,” adding that Qatar is a “tolerant” and “welcoming” country.

‘FIFA must set the tone and lead’

Klaveness addressed both issues without mentioning Qatar by name, saying that Norway had considered boycotting the World Cup but decided “dialogue and pressure” would be a better solution.

“The migrant workers injured or families of those that died in the build-up to the World Cup must be cared for,” Klaveness continued.

“There is no room for employers who do not secure the freedom and safety of World Cup workers. No room for leaders that cannot host the women’s game. No room for hosts that cannot legally guarantee the safety and respect of LGBTQ+ people coming to this theater of dreams.

“FIFA must set the tone and lead,” she added.

Al Thawadi went on to express his disappointment that Klaveness “made no attempt to contact us and did not attempt to engage in dialogue before addressing Congress.

FIFA President Gianni Infantino later told the delegation that Qatar had done “exemplary” work in regard to changes on human rights issues, adding that labor legislation reforms in the country had been “incredible.”

“The only way to provoke positive change is through engagement and through dialogue,” Infantino said, asserting that in Qatar, “we organize the best ever World Cup.”

‘He ought to pick his words very carefully’: Al Khater responds to England boss

Last week, England manager Gareth Southgate dismissed calls to boycott the tournament, telling reporters that it was important “to use our voice in the right way at the right time.”

In light of Qatar’s anti-LGBTQ+ laws, Southgate said earlier this month it would be a “a great shame” for some England fans not to travel to the World Cup because they felt threatened or were afraid for their personal safety.

“The biggest issue, which is non-religious and non-cultural, is what happened with the building of the stadiums — and there is nothing we can do about that either, sadly,” Southgate said.

“Because is kind of an issue if you’re basing your opinions and you are very vocal about that based on things you have read,” Al Khater told Sky Sports.

“Somebody with a lot of influence, such as Southgate, somebody with a big audience that listens to what he says, ought to pick his words very carefully.

“No country is perfect … so if somebody is coming and claiming they are a perfect country, they need to really take a look at themselves.”

Though acknowledging “encouraging signs of progress,” an open letter from FIFPRO and global trade union federation Building and Wood Workers’ International (BWI) said that the build-up to the tournament had been “filled with human rights scandals and poor worker conditions.”

“Unscrupulous employers oppose the reforms and are not being held to account. Workers in the most vulnerable positions from countries such as India, Bangladesh, Nepal, the Philippines, Pakistan and some African countries still fear retaliation if they denounce exploitation of unpaid wages and long working hours.

“Those who have escaped poverty in their home country fear losing their job and their salaries. They continue to face the threat of exploitation and unsafe working conditions.”

In order to prevent progress from being halted once the “spotlight” on the World Cup has dimmed, the statement called for the creation of a center in Qatar to operate as a self-governed “safe space” for expatriate workers.

The center would allow workers to “develop skills, learn and get advice about their employment rights … and allow them to effectively co-operate with Qatari authorities on pressing issues.”

Qatar and FIFA have not yet responded to CNN’s request for comment.

On Wednesday, BWI announced the organization of the Migrant Workers’ Cup, a tournament to celebrate those who helped build the Qatari stadia and “celebrate labour and sport as a lever for social change.”

Taking place at the Al Jazeera Academy in Doha, the event will see three teams formed of migrant workers, footballers and trade union members of BWI affiliates face off.

“Remember, we owe the migrant workers,” the open letter concluded, “It was they who toiled in scorching heat to build the infrastructure and stadiums.

“They endured cramped and inhospitable accommodation. Sometimes, they risked their lives to send money home to their families. Some of them lost their lives.

“They are the ones who made this tournament happen … let’s make sure that we do not forget them.”