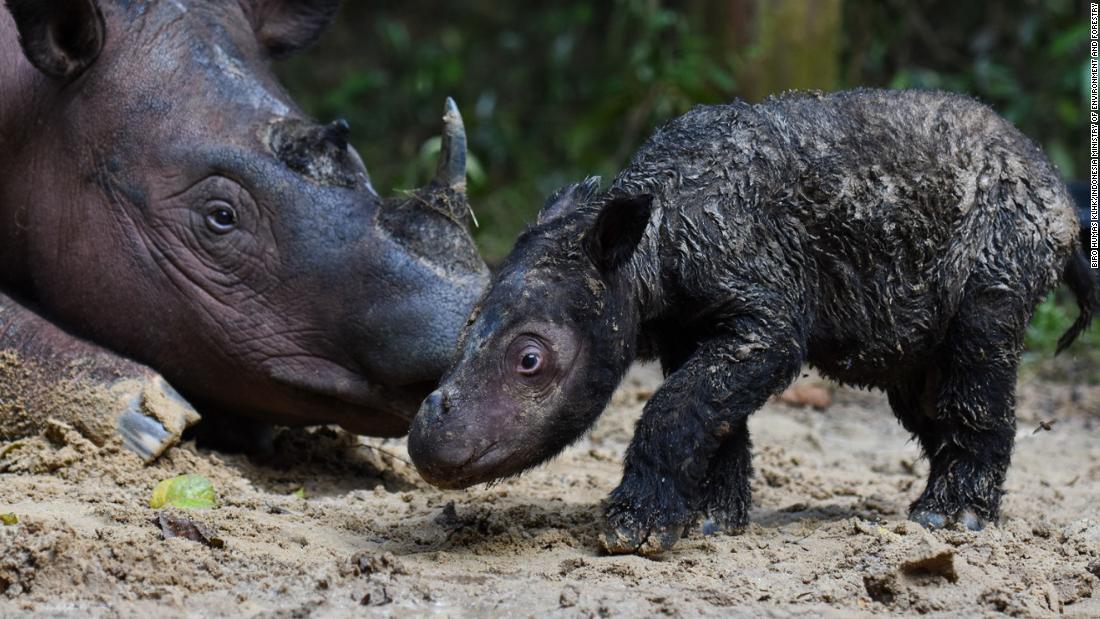 The female rhino was born at the Sumatran Rhino Sanctuary in Way Kambas National Park in Sumatra’s Lampung Province on March 24, according to Indonesia’s Ministry of Environment.

“The birth of the Sumatran rhino is good news amid the efforts of the Indonesian government and partners to increase the Sumatran rhino population,” Wiratno, the director general of conservation at the environment ministry, said in a statement.

Sumatran rhinos, the world’s smallest rhino species, once flourished across Southeast Asia but they are now found only in tiny pockets on Indonesia’s northern island of Sumatra and Indonesian Borneo.

Fewer than 80 Sumatran rhinos remain, according to the International Rhino Foundation (IRF).
In 2019, Malaysia’s last Sumatran rhino died at the Borneo Rhino Sanctuary. The Sumatran rhino was declared extinct in Malaysia in 2015 but the death of the female, called Iman, meant the species had been completely wiped out there.

The calf’s birth in Indonesia last week brings the number of Sumatran rhinos at the sanctuary to eight.

The pregnancy wasn’t an easy process. The mother, a rhino named Rosa, had lost eight previous pregnancies. And the father, Andatu, was the first rhino ever born in captivity in Indonesia, the IRF said.

The captive breeding program at the Sumatran Rhino Sanctuary, which the IRF helped build, is the only place in the country “for the Sumatran rhino to breed naturally with the support of technology and collaboration of expertise,” Wiratno said.

The program aims to maintain the survival of the Sumatran rhino by increasing rhino numbers so someday they can be reintroduced into the wild.

“Rosa’s pregnancy represents new hope for this critically endangered species,” Nina Fascione, executive director of the IRF, said in a statement. “This is a momentous occasion for a critically imperiled species. We share the excitement of this birth with the world!”

Multiple factors have contributed to the rhino’s population decline. Initially, it was caused by poaching for their horns, which were coveted as ingredients in traditional Asian medicine. Later, it was exacerbated by fragmented habitats and human encroachment on the environment, which prevent the rhinos from gathering and breeding.

Without intervention, the IRF said the Sumatran rhino will be extinct in a matter of decades.

International rhino experts and the Indonesian government have decided relocating rhinos to a captive breeding program was the only way to save the species.

There are now only five remaining rhino species worldwide, and all are threatened. Some sub-species have already vanished; the western black rhino, native to western Africa, was declared extinct in 2013 due to poaching. And the last male northern white rhino died in 2020.