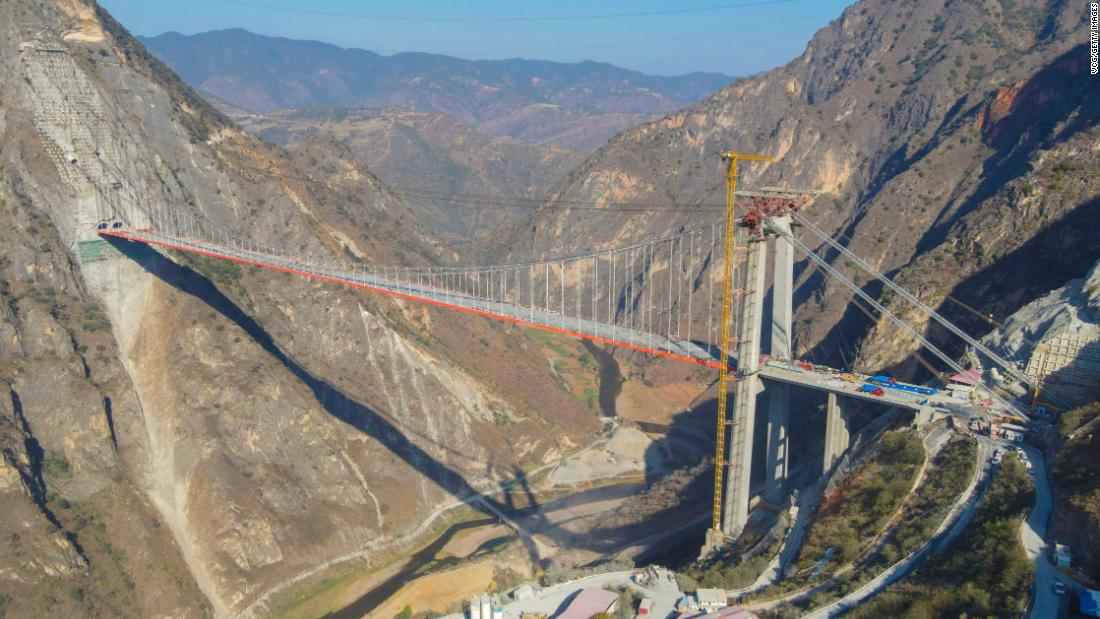 (CNN) — Traveling in China’s scenic Yunnan province is about to get a bit easier — and more thrilling — with the world’s first single-tower, single-span suspension bridge set to open next month.

Stretching 798 meters over a river valley, Lvzhijiang Bridge’s mere length may not sound all that extreme when compared to some of the world’s longest bridges. But the complexity of the project is earning it recognition as an engineering marvel.

The bridge hangs above Lvzhijiang (literally translated as “Green Juice River”) and protrudes from tunnels that emerge from steep mountain faces on each side of the valley.

Built in a mountainous V-shaped valley, it is the world’s first single-tower, single-span suspension bridge; it’s only held up by one tower and is supported at both ends by cables. There are no additional columns, giving it a dramatic, gravity-defying look.

The bridge’s single span — the distance between two supports — is 780 meters. In addition, officials say it has the world’s steepest tunnel anchorage, which is angled at 54 degrees.

The project manager told Chinese state media that “the height difference between the bridge deck and the assembly yard is 320 meters high, or about 100 stories high … the complexity of this project is rarely seen in China.”

The maximum speed limit on the bridge is 100 kilometers per hour.

With construction commencing in 2019, the project took about three years to complete. It’s expected to open to traffic by late April 2022.

Connecting Yunnan to the rest of China

When complete, Lvzhijiang Bridge shorterns the journey between the two sides of the river from 1.5 hours to two minutes.

Although both Yuxi City (famous for tobacco production) and Chuxiong — an autonomous region of the ethnic Yi people famed for its dinosaur museum — aren’t considered popular tourism destinations, the two areas are located right in the heart of Yunnan province, between major cities like Kunming and Dali.

The Yuchu Expressway links Yunnan with other major national expressways, such as the Hangzhou-Ruili (a western Yunnan city bordering Myanmar) Expressway and the Guangzhou-Kunming Expressway.