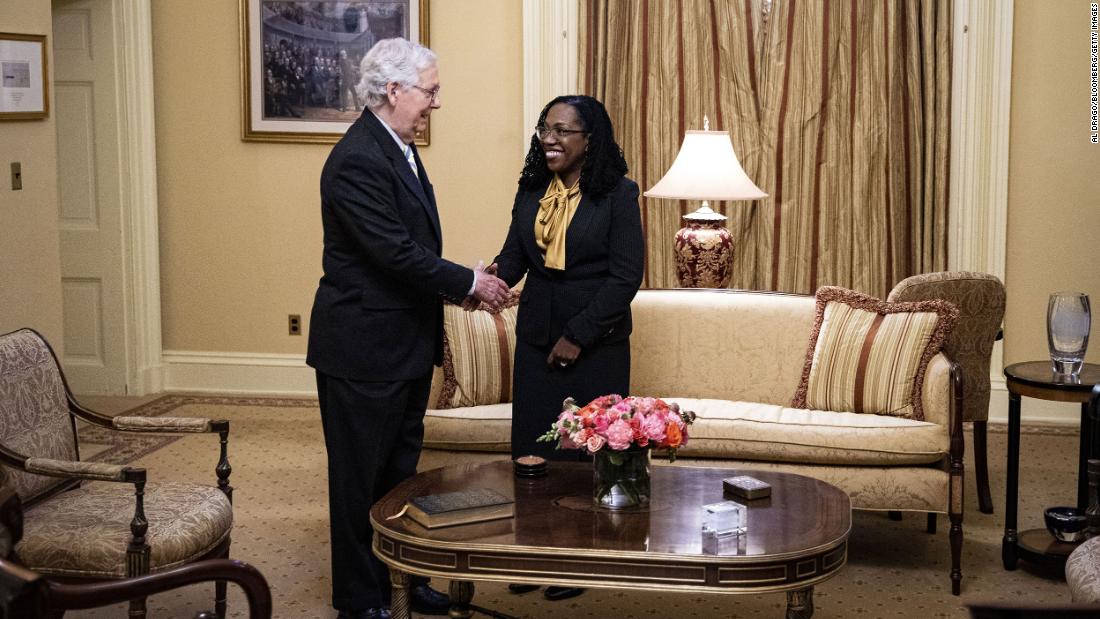 “It’s going to be a very good election for Republicans and one of the ways we can screw this up is to go scorched earth on Judge Jackson’s nomination,” said Mike Davis, former chief counsel for nominations at the Senate Judiciary Committee who is now informally advising GOP staff.

While Republicans are still in the early stages of crafting a cohesive strategy, their approach so far has been to carefully balance how to motivate their base on an issue that has proven to be a top priority with the reality that Jackson’s confirmation will not put a dent on the 6-3 hold conservatives have on the court, and giving her a thorough vetting without crossing the line and making it a political vulnerability.

“I don’t think there’s a lot of surprises here. And I also think, given the fact that she’s not going to change the balance, ideological balance of the court, I think people will be respectful and they’ll do their due diligence and ask questions,” said Sen. John Cornyn, a Texas Republican on the Judiciary Committee. “I think we all have a pretty good idea of what the outcome is likely to be — unless there’s a big surprise.”

Questions that could range from court-packing to crime

Republicans are so far borrowing attacks from previous playbooks — for instance, highlighting the support that Jackson has from liberals and some activists’ push to expand the Supreme Court — rather than dialing in specifically on Jackson’s individual record, something that may become more of a focus during the confirmation hearing.

Senate Minority Leader Mitch McConnell on Thursday zeroed in on the fact she wouldn’t answer a question about court expansion during his Wednesday meeting with her, an issue that ultimately Congress — not the court — would decide on.

“Justice (Stephen) Breyer has distinguished himself by loudly and proudly putting those radicals in their place. He has consistently denounced the concept of partisan court packing and defended the court’s legitimacy. One would hope his successor would follow suit,” McConnell said.

McConnell also argued that Jackson is a nominee from the far left corner of the Democratic Party and that while her confirmation would be dignified, it would also be “vigorous, exhaustive and painstaking.”

Since Jackson’s nomination was announced late last month, Senate Republicans haven’t met specifically to strategize. Iowa Sen. Chuck Grassley, the top Republican on the Judiciary Committee, also hasn’t convened a meeting of his Republicans to lay out a cohesive plan. Some of that, members say, isn’t McConnell or Grassley’s style. Instead, they insist that members will be encouraged to make their own decisions about the nominee.

“As with most things, Mitch McConnell has a very light hand and lets us each pursue our own process and reach our own decisions,” Sen. Mitt Romney, a Republican from Utah who is undecided on Jackson, said.

Republicans may use Jackson’s hearing to focus on issues that could boost them in an election year, with concerns about crime currently taking center stage in lower court nomination hearings.

Former Democratic Sen. Doug Jones, who is acting as a liaison for Jackson as he meets with members ahead of her hearing, told reporters that painting Jackson as soft on crime because she was a public defender would be a mistake.

“Look, she was a public defender, but that doesn’t mean she is soft on crime, that she’s pro-criminal. There’s not a single public defender ever who was pro crime. They are defending the Constitution and the rights of folks,” Jones said, pointing out that Jackson also served on the US Sentencing Commission where she worked with conservative judges.

Carrie Severino — the president of president of the Judicial Crisis Network, which supports conservatives in judicial confirmation fights — said that questions about the legal arguments Jackson in her advocacy made are “fair game.”

“You can be a zealous defender of your clients without making arguments that are unreasonable,” she said. “I think that is going to be the question: looking at some of the arguments and saying, wait a minute, is this really in the bounds?'”

For their part, Democrats are optimistic that they can make this more than just a party line vote. Senate Majority Leader Chuck Schumer said earlier this week he was confident she’d win over a few Republicans.

There is reason for Democrats to be optimistic. Jackson has received a string of endorsements from respected conservative legal thinkers, including the retired federal Judge J. Michael Luttig, as well as several attorneys who clerked at the Supreme Court while Jackson was a clerk for Justice Stephen Breyer. Less than a year ago, Jackson won three GOP votes — Sens. Lindsey Graham, Susan Collins and Lisa Murkowski — when she was confirmed to the DC Court of Appeals. Now, a handful of Republicans say they are still open to voting for her for the high court.

“I want to review her major decisions, identify where she has been overturned, but most of all I want a sense of her judicial philosophy. I care very much that she be in the mainstream of judicial thought,” Collins told CNN. “I did not meet her before having to vote on her nomination for the circuit court so this interview in my office is really critical.”

Still, Republicans are arguing that Democrats are rushing a process that doesn’t need to be completed until late summer or early fall. Schumer has aimed to have her confirmed by Easter, with her confirmation hearings before the Senate Judiciary Committee scheduled to begin on March 21.

“What’s the rush?” one Republican aide argued, saying that Republicans need time to do their due diligence, review her decisions and request and gather records on Jackson’s government experience from when she served as the vice chair of the United States Sentencing Commission.

One idea circulating among some Republicans is to take the White House up on its offer to have Jackson sit down with any senator who requests a meeting, a deluge of which could consume so much of her time that she might need more preparation before hearings begin in two weeks.

The last time Jackson was before the Senate Judiciary Committee

The tone of Jackson’s 2021 appellate nomination hearing — when, already, she was seen as a contender for the Supreme Court if a vacancy opened up under President Joe Biden — had a notably subdued tone. Republicans tread carefully around the issue of race in her hearing, but they did not shy away from it completely.

“I don’t think that race plays a role in the kind of judge that I have been and that I would be, in the way that you ask that question,” she said.

Other exchanges were even less confrontational, with several Republicans asking Jackson — who served as a member of the US Sentencing Commission in addition to her experience as a public defender — how she viewed the effects of race in sentencing and other aspects of the legal system.

Some Republicans asked her open-ended questions about her views on the Second Amendment, religious freedom and judicial activism. They reserved their sharpest scrutiny not for her personal record but for the support she’s received from Demand Justice, a progressive group seeking to counter the role that conservative groups have played in judicial confirmation politics.

In a foreshadowing of the attention McConnell has now put on court expansion, she received repeated GOP questions about expanding the Supreme Court, as Demand Justice and others on the left have called for.

“I don’t think it’s appropriate for me to comment on proposals about the structure of the court, about expanding the court or anything the sort,” she said in response to a question from Sen. Marsha Blackburn, a Republican from Tennessee.

The lack of fireworks at her circuit court hearing is a contrast to how contentious the GOP questioning has gotten for other lower court nominees in recent weeks. Republicans have expressed indignation when some nominees — and particularly nominees who are former public defenders, like Jackson — have refused to weigh in on policy debates around progressives’ approach to prosecutorial decisions and how, in Republicans’ view, they’ve contributed to a rise in crime.

At a lower court nomination hearing Wednesday, Texas Republican Sen. Ted Cruz said there was “a three-pronged strategy from the Democrats to abolish the police” and that one of those prongs was “putting judges in place who don’t follow the law.”

Asked by CNN after the hearing whether Jackson fit into that framework, Cruz said that he was still “reviewing her record.”

“So, I’ll make an assessment when I’ve had the opportunity to give it a thorough and careful review,” he said.