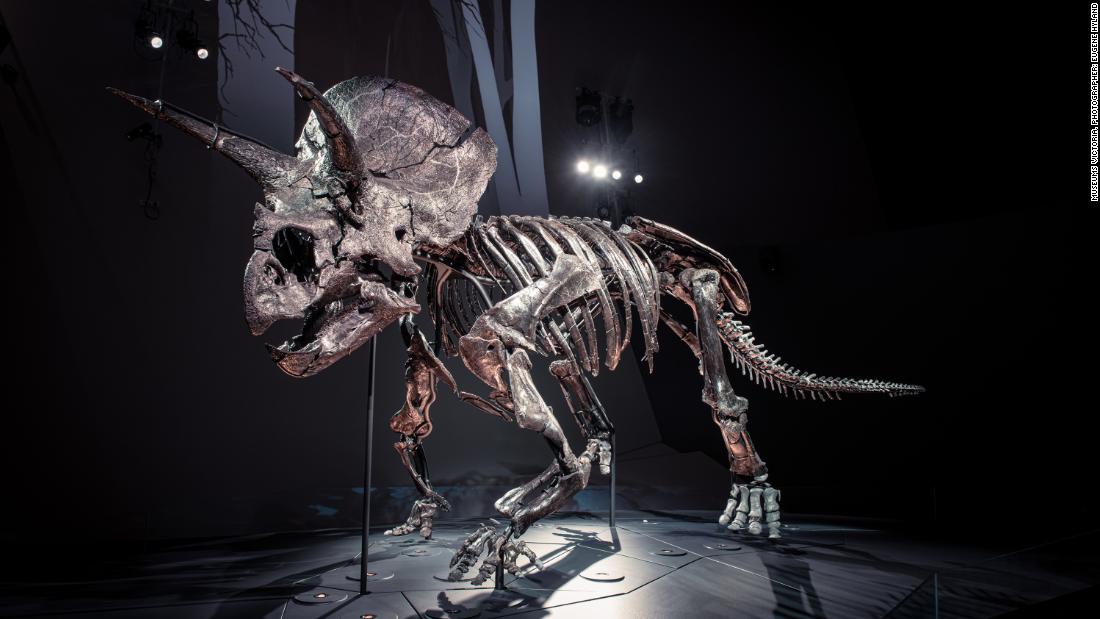 Little did Pfister know that he had stumbled across one of the most complete skeletons of the mighty Triceratops.

“At that time, I suspected or hoped it was something special, but it took another month of excavation before I knew the extent and quality of the specimen,” he said.

It’s called Horridus, a name given to the specimen by its new owner Museums Victoria, Australia’s largest public museum organization. The nickname is derived from its full name Triceratops horridus, and it lived 67 million years ago.
Pfister is the owner of Great Plains Paleontology, a company based in Madison, Wisconsin, that scouts for and digs up fossils. Over his nearly 30-year career, he’s discovered multiple Tyrannosaurus rex specimens along with other rare dinosaurs, but Horridus remains one of his all-time favorites, he said.

After finding the dinosaur remains in 2014, Pfister took more than a year to excavate the bones with a couple of his colleagues.

That’s understandable, considering the Triceratops left more than 266 bones for the paleontologist to unearth.

The skeleton made the long trek from North America in eight special crates to reach its new home at the Melbourne Museum.

These bones make up the most complete dinosaur remains at any Australian museum, according to Erich Fitzgerald, senior curator of vertebrate paleontology at Museums Victoria.

Horridus is nearly 85% complete, standing about 2.5 meters (8 feet) tall, 7 meters (23 feet) long and weighing 1,000 kilograms (2,205 pounds), he said. The skull is 98% complete and features three horns along with a majestic frill, the flat bone plate jutting out from the top of the Triceratops’ head.

The dinosaur may have used its horns to protect itself from predators or to attract potential mates, Fitzgerald said.

Not much is known about how the plant-eating dinosaur became so perfectly preserved, but Fitzgerald said he believed the creature would have had to been buried shortly after dying.

“I suspect the carcass got washed intact into a river channel, sank quickly to the bottom and then was rapidly covered by sand and mud on the riverbed,” he said. It could have also died in the water, he added.

Paleontologists are rarely able to decipher a dinosaur specimen’s sex, so it’s not clear if this Horridus was male or female. Unless physicists invent a time machine, it’s unlikely humans will be able to answer that question within the century, Fitzgerald said.

“In the meantime, it’s these enduring mysteries that continue to spur paleontologists to find out more about our planet’s past and ignite wonder in us all,” he said.

How to see Horridus

The Melbourne Museum opened the Triceratops exhibit, called “Triceratops: Fate of the Dinosaurs,” this month.

It’s a permanent part of the museum collection, so visitors don’t need to worry about the dinosaur exhibit going away anytime soon, according to Fitzgerald. Its housing in a public museum also allows scientists to engage in scientific research on the skeleton, he said.

If a trip to Melbourne isn’t on your bucket list, you can examine the bones of a 3D model of Horridus online.