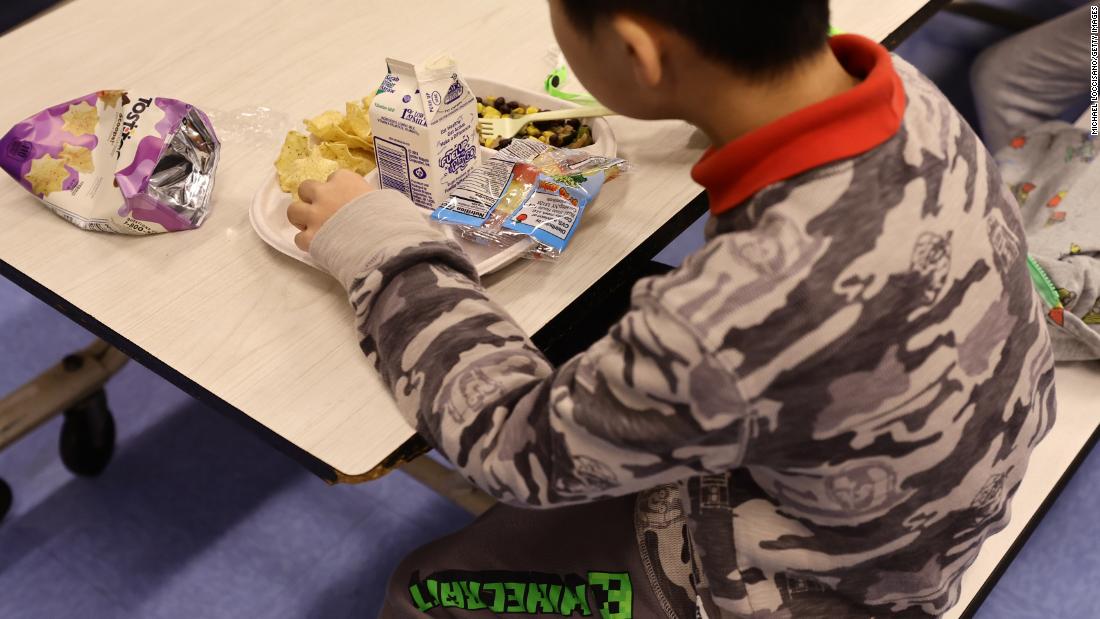 Federal government funding expires on Friday. The full-year spending package, which House Democrats plan to unveil as soon as Tuesday, could allow the waivers to continue for the 2022-23 school year.

But Senate Minority Leader Mitch McConnell is blocking the extension of the waivers, according to a source familiar with the negotiations. So the provision is not in the spending package, as of now.

Congress gave the USDA the authority to boost school meal reimbursement rates and to waive certain requirements in a coronavirus relief package approved in March 2020 and then again in a federal spending measure that fall. School districts were scrambling to provide millions of children with the meals they would have received had schools not shut down because of the Covid-19 pandemic.

The waivers will remain throughout this school year, but if the authority expires after that, the average school district will see a 40% reduction in reimbursements for meals, according to the USDA. The extension would cost an estimated $11 billion, per the department.

The USDA is using the authority to help schools cope with the higher cost of providing meals during the pandemic and the ensuing supply chain chaos and labor shortages. It is reimbursing districts at a summer rate of $4.56 per meal, on average, as opposed to the typical $2.91 per meal for the school year. It is also allowing schools to provide free meals to all students, instead of requiring them to verify families’ incomes.

Plus, the agency is able to provide districts with more flexibility to handle pandemic outbreaks — such as letting students eat in their classrooms or providing grab-and-go meals for children who must quarantine at home.

The USDA can also waive penalties for school districts that can’t meet nutrition requirements — including those governing whole grains, sodium and vegetables — because of supply chain problems.

School districts are currently planning menus and placing orders, but it’s difficult to do so when they don’t know how much they’ll be reimbursed or what flexibilities they’ll have, said Diane Pratt-Heavner, spokeswoman for the School Nutrition Association. Members are lobbying their representatives to provide districts and their suppliers with the assurance that the waivers will be extended beyond this school year.

“The need is greater now than ever,” Jack Miniard, president of the Kentucky School Nutrition Association, wrote to McConnell on Sunday in a letter obtained by CNN. “While the virus is waning, the effects persist.”

Some 92% of school meal programs are experiencing challenges due to supply chain disruptions, according to a USDA survey released last week. Products are not available, orders are arriving with missing or substituted items, and shortages of cooks, food prep personnel, drivers and maintenance staff continue. This is forcing schools to pay more for food and for workers.

“They are really relying on these higher reimbursement rates to cover these new, higher costs,” said Pratt-Heavner, noting that the shortages are expected to last into the next school year.

Jefferson County Public Schools in Louisville, Kentucky, is providing a $3.50 an hour bonus to cafeteria staff to retain them, but it still has 90 vacant positions, rather than the typical 50 open ones, said Dan Ellnor, assistant director for school and community nutrition services. And food costs have already risen 15% and are expected to increase another 10%, or $2 million, next year.

Plus, the district, which serves 90,000 meals a day, is contending with shortages in items such as cardboard lunch trays and baby carrots. The substitutions, such as kiwis for carrots, frequently cost more, Ellnor said.

The end of the waivers will also have an impact on summer meal distribution. Multiple districts have said they’ll have to stop serving meals or significantly cut back if they lose the flexibilities they’ve had during the pandemic, said Lisa Davis, senior vice president of Share Our Strength’s No Kid Hungry campaign.

The waivers allow districts to provide families with meals for multiple days or to drop off food for children. That helped the summer meal program to grow from 95 million meals served in 2019 to nearly 263 million in 2020 and nearly 191 million last summer.

“They can’t afford to run it without the flexibilities,” Davis said. “It’s a lot more expensive to try to operate a site every day.”