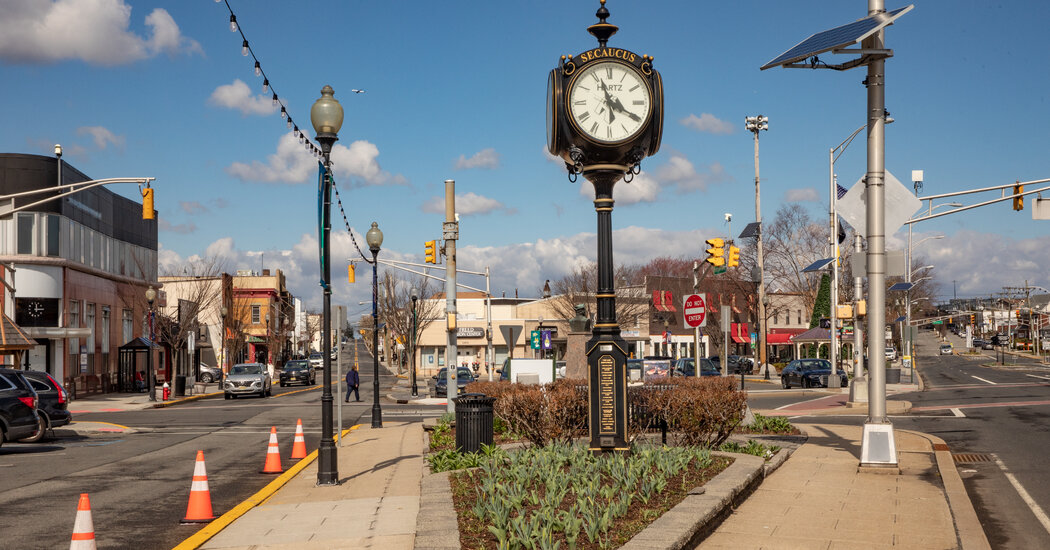 The Hudson County suburb of Secaucus, N.J., anchors the New Jersey Meadowlands, some 30 square miles of marshland, veined with estuaries and dotted with more than a dozen towns. There was a time when people fishing in those waters told stories of reeling in a broken statue from the old Penn Station or finding a body buried under the beach grass.

But no more: Today, the marshes are interwoven with walkways and nature preserves. And Secaucus’s factory outlets, which drew bargain hunters in the early 1970s, have been joined by numerous retail chains.

For many young families, though, it’s the suburban vibe that’s the big draw — along with the short commute to the city.

“What makes Secaucus extremely desirable to buyers, first and foremost, is its proximity to New York City, along with ample bus stops and free shuttles from most condo complexes to the train station,” said Michael Gonnelli, a real estate broker who leads the Gonnelli Group at Re/Max Infinity, in Secaucus, and is the son of the town’s mayor (also named Michael Gonnelli).

That was true for Ling Dao and Jane Wang, who owned a home in Edison, N.J., and wanted easier access to the city along with more activities for their two young children. “Edison also felt very crowded, with limited parks and playgrounds for the kids,” said Mr. Dao, 33, an information manager for a pharmaceutical company.

He and Ms. Wang, 35, a stay-at-home mother, looked in Jersey City, Hoboken and Queens before buying a three-bedroom home near downtown Secaucus earlier this year for $765,000.

“In the end, we fell in love with Secaucus because it’s very close to the city, but is more quiet and kid-friendly,” Mr. Dao said. “We use the numerous playgrounds. We also frequently visit the town’s recreation center to use the swimming pool and track. During summer, we attend free concerts and movies in Buchmuller Park.”

Bledar and Zlatina Brahimi left nearby Edgewater for Secaucus last summer, because “in Edgewater,” said Mr. Brahimi, 30, who works in finance, “there were great city views, but everything was co-ops and condos.” They looked in New York City, but found it overpriced.

The couple hope to start a family, Mr. Brahimi said, and “what helped narrow down our choice was the school system and tax rates.”

In Secaucus, he and Ms. Brahimi, 28, who works in accounting, were able to find a five-bedroom, three-bathroom house with an in-ground pool and “a pretty nice size backyard,” for $700,000.

Secaucus, a town with a median household income of $125,142 and a population of about 22,200, according to 2020 census data, occupies 6.5 square miles (about 10 percent of which is water) in Hudson County. It is bordered by the Hackensack River to the north, east and south, and Union City and Jersey City to the east.

The housing inventory includes single- and two-family homes in a range of styles, including ranches, Capes, colonials, townhouses and luxury high-rise condominiums. Harmon Cove, a gated community with about 1,400 units that include townhouses and high-rise condos, sits on the Hackensack River, in the western part of town.

Rental options include the Harper at Harmon Meadow Apartments, on the eastern edge of town, and Xchange, a complex with some 2,000 units catering to younger renters who want an easy commute to Manhattan, to the south. (Secaucus Junction, the train station, is opposite the complex.)

Various chain restaurants can be found at the Plaza at Harmon Meadow, a shopping center in northeastern Secaucus with a Panera Bread, an Olive Garden and a Bonefish Grill. Retail options there include chains and big boxes — Walmart, Sam’s Club, HomeGoods, T.J. Maxx. Construction is expected to start soon on a new Hometown Market grocery story in the center of town.

At $6,646, the average residential property tax in Secaucus is the lowest in Hudson County, according to New Jersey’s Department of Community Affairs. By contrast, Weehawken residents pay an average of $12,138.

The “property taxes are some of the most affordable in all of northern New Jersey,” said Mr. Gonnelli, the broker.

In early April, the New Jersey Multiple Listing Service showed 41 homes for sale, from a two-bedroom condominium in Harmon Cove Tower listed for $235,000 to a two-family house with four bedrooms listed for $990,000.

Secaucus can seem like a tangle of highways. The eastern spur of the New Jersey Turnpike hugs the town’s southern and eastern boundaries, while Route 3 cuts off the main thoroughfare of Paterson Plank Road from the rest of town, with an overpass connecting the two sections.

Downtown, however, offers a stark contrast to the malls, chain stores and highways. It is home to the public library, the municipal government center, a senior center and small businesses like Filomena’s deli, Lucky Nails and Marra’s Drug Store, which has been in business for nearly a century. Other downtown attractions include the ice rink, the Town Museum and Buchmuller Park, which hosts outdoor concerts and the Secaucus Little League.

It would be hard to find another municipality where visitors looking for a nature preserve are directed to Bob’s Discount Furniture. But just behind the store is Mill Creek Marsh, where visitors can see turtles, shorebirds and other wildlife.

The town’s parks include Schmidts Woods Park, Trolley Park (which offers views of the American Dream Ferris wheel in East Rutherford) and Laurel Hill County Park, which has a canoe launch, kayak rentals, cycling and walking paths, and ball fields, including a cricket pitch.

The Secaucus Public School District serves about 2,265 students in prekindergarten through 12th grade. During the 2019-20 school year, 33 percent identified as white, 32.1 percent as Hispanic, 29.3 percent as Asian and 3.9 percent as Black.

The district operates five schools: Milridge (for prekindergarten), Clarendon (kindergarten through fifth grade), Huber Street (prekindergarten through fifth grade), Secaucus Middle (sixth through eighth grade) and Secaucus High School. High Tech High School, a Hudson County magnet school, serves students in ninth through 12th grade. On 2019-20 SAT tests, students scored an average of 531 in reading and writing, compared with 536 statewide; their average score in math was 544, compared with 536 statewide. The graduation rate in 2020 was 96.7 percent, compared with a statewide average of 91 percent.

New Jersey Transit trains leave the Secaucus Junction station for Penn Station in Manhattan, Newark Liberty International Airport and other destinations including Atlantic City, Monmouth Park and Philadelphia. The ride to Manhattan typically takes about 12 minutes. A one-way ticket is $4.25, and a monthly pass is $126.

Traveling by bus can take about 15 minutes to an hour, depending on traffic. The round-trip bus fare from Secaucus Junction to Port Authority is $7; a monthly pass is $107.

In 1658, Peter Stuyvesant, the Dutch governor of the colony of New Netherland, negotiated a treaty between European settlers and the Lenni-Lenape people that referred to what is now Secaucus as “Islandt Siskakes” — the first known mention of the area. At the time, it was an island surrounded by swamps and creeks, according to “History of Secaucus,” a 1950 book that devotes an entire section to “Jersey mosquitoes.”

Secaucus wasn’t incorporated as a town until 1917, when it was an agricultural community known for its pig farms. In the 1950s, with the construction of the New Jersey Turnpike, it gradually became the commuter town that it is today.