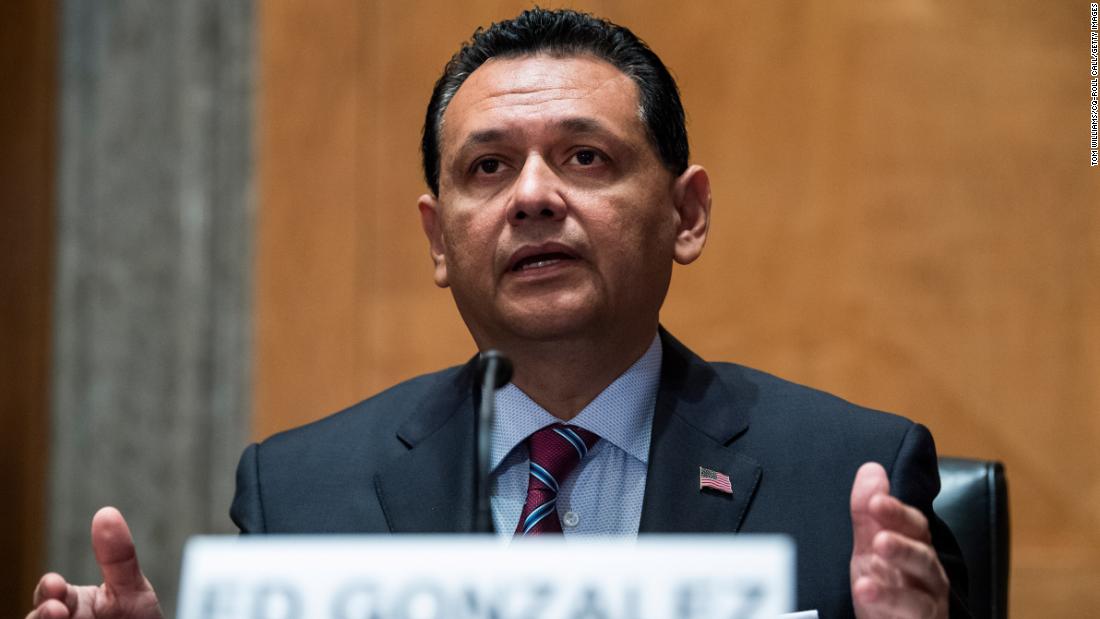 The allegation, which stems from an affidavit filed last July, is described in a letter from Sen. James Lankford, a Republican from Oklahoma, who asked Democratic leaders to put off the vote so the allegation could be investigated.

The affidavit, provided by Lankford, was part of a lawsuit against staff members of Houston Community College and unrelated to Gonzalez. A licensed police officer for the college claimed in the affidavit that he, along with another officer, was called to investigate “an alleged domestic dispute” involving Melissa Gonzalez. The affidavit doesn’t describe the nature of the domestic incident.

In a statement, Ed Gonzalez’s wife, Melissa Gonzalez, denied that she had filed or made a complaint against her husband. “To be clear, the assertions referenced in the affidavit, as they relate to me, my husband, or my marriage, are completely false,” she said in a statement shared by the White House.

Gonzalez was elected sheriff of Harris County, Texas, in 2016 and has a decades-long career in law enforcement, according to his Harris County biography. Biden nominated Gonzalez last year to helm ICE, the immigration enforcement arm of the Department of Homeland Security.

“Sheriff Gonzalez is an extraordinarily qualified law enforcement professional with 30 years’ experience. He has a proven track record of implementing progressive solutions to difficult problems, while coordinating with federal partners, including ICE, to make Harris County Texas safer, and he should be confirmed without delay,” a White House official said.

Sen. Gary Peters, a Democrat from Michigan who chairs the Senate Homeland Security and Governmental Affairs Committee, which has jurisdiction over ICE, said that “any allegation of domestic abuse concerns me” and “we’ll have to wait to see” if the nominee gets a vote on the floor after more information comes to light. Peters’ committee voted again this year to move Gonzalez for full Senate consideration despite GOP objection.

Peters said he had personally talked to Gonzalez about the allegation but did not provide additional details. In a statement to CNN, Gonzalez said, “The allegations are false, all politics.”

The last time ICE came close to permanent leadership was in 2019, with the appointment of Ron Vitiello. Vitiello’s nomination was unexpectedly yanked by then-President Donald Trump and consistent turnover followed.

ICE, which is currently led by career official Tae Johnson in an acting capacity, never had a Senate-confirmed director during the four years of the Trump administration.