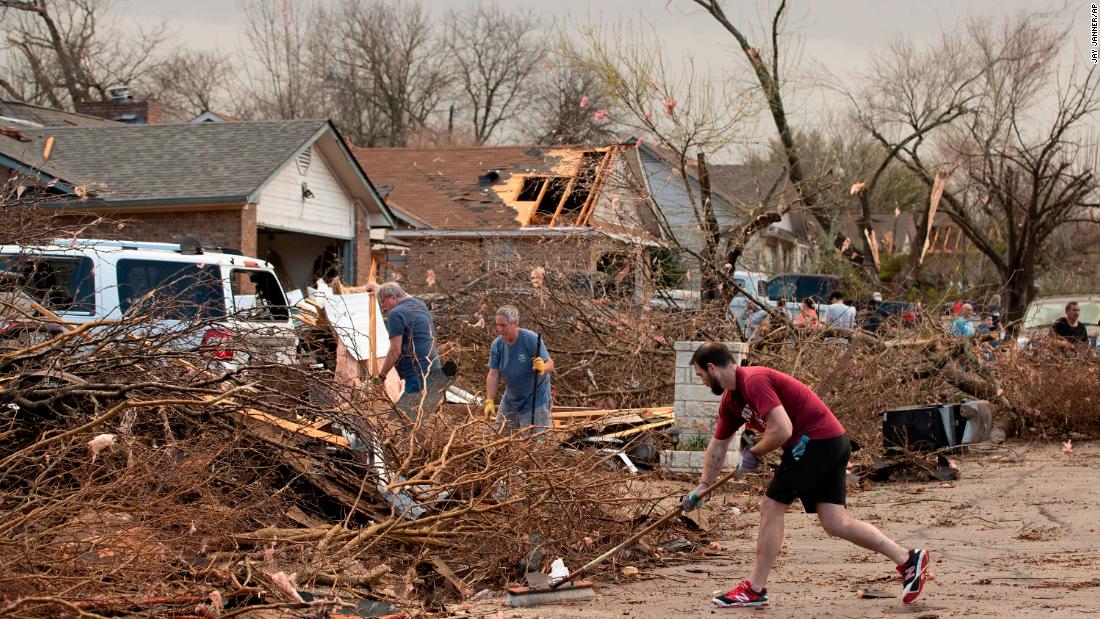 There were 17 tornado reports across Texas and Oklahoma, CNN Meteorologist Rob Shackelford said. Nearly 65,000 customers were without power in Texas early Tuesday, largely in the Houston area, according to PowerOutage.US.

The line of severe weather struck as the state was already dealing with more than 170 wildfires over the past week, which had burned more than 108,000 acres, fire officials said.

Several state agencies, including the Texas Division of Emergency Management and the Texas Department of Public Safety, are responding to Williamson and Bastrop counties in the Austin area, Gov. Gregg Abbott said.

An emergency declaration was already in effect in Williamson County due to the recent fires and will apply to storm damage as well, Abbott said.

“As we speak right now, I want everybody across the state that’s going through this to know, the state of Texas is going to be with you every step of the way,” the governor said.

A reported tornado moved through Round Rock in Williamson County around 6 p.m., authorities said.

Round Rock is about 15 miles north of Austin.

Further north in Jacksboro, about 60 miles northwest of Fort Worth, Fire Chief Jeremy Jennings said it was a miracle more people weren’t injured, especially at Jacksboro Elementary School, which was sheltering a large number of students as a storm moved through and left its gymnasium badly damaged.

The children were about to be released for the day when officials decided to have everyone go back inside, Jacksboro Police Chief Scott Haynes said.

The gym at Jacksboro High School was also badly damaged and the facilities will be unusable “for some time,” Jennings said.

“We’re just very blessed to have facilities that were designed to sustain a storm, the storm damage that we received,” Jacksboro Independent School District Superintendent Brad Burnett told CNN affiliate WFAA. “I just know our students were safe in our facilities and I’m thankful for that.”

Burnett said elementary school students became “pretty emotional” when they left the school and saw the damage caused by the storm.

Officials in Jack County, where Jacksboro is located, said 60 to 80 homes were “demolished” and a shelter has been set up for displaced families.

“I’ve been a part of emergency services for 24 years here, I’ve never seen anything nowhere near this magnitude here,” Jennings, the fire chief, said. “Nothing like this, not even anywhere else in this county.”

The storm also delivered widespread rainfall of 1 to 2 inches with some areas getting as much as 5 inches, which should help with drought conditions in the region, Shackelford said.

Abbott encouraged residents in storm-damaged areas to wait until morning to fully assess their property since doing so at night could be dangerous.

As the storm system moves east Tuesday, around 20 million people in the Lower Mississippi Valley and central Gulf Coast region will be under some threat of severe weather, Shackelford said, including large tornadoes, damaging winds and hail.

Major cities in the storm’s path include Baton Rouge and New Orleans in Louisiana, and Jackson and Gulfport in Mississippi, along with Houston, Memphis and Birmingham, Alabama.

About 17 million people from Texas to Alabama and north to Arkansas and Tennessee are under a flood watch Tuesday, Shackelford added.

The system will weaken as it continues moving east Wednesday bringing a slight risk of severe weather to areas including Atlanta and Charlotte, Raleigh and Durham, North Carolina.