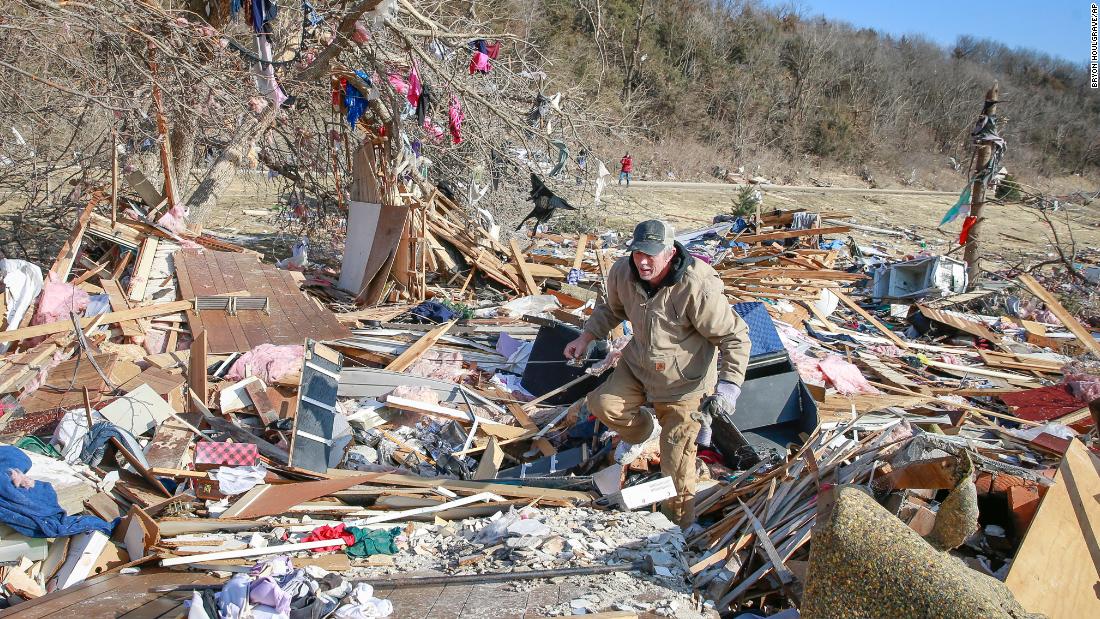 A tornado watch is in effect until 2 a.m. CT Monday for portions of western and northern Arkansas into southern Missouri, according to the National Weather Service. Damaging winds, isolated large hail and the potential for tornadoes remain a threat for the region into Monday morning.

“Primary threats into the early morning hours include the potential for a few tornadoes, in which a couple could be intense. Scattered damaging winds are also likely with isolated significant gusts to 75 mph,” Guy said.

A spokesperson for the Arkansas Division of Emergency Management said there was tornado damage and multiple downed power lines near the Martin Township area, about 70 miles northwest of downtown Little Rock, with one injury reported.

A family was reported to be trapped in their storm shelter but were later able to be helped and are safe, according to the agency.

The Pope County Office of Emergency Management in northwest Arkansas asked people to avoid the area “as emergency responders and other officials work in the area to clean up and check on residents.”

As residents brace for more potentially severe weather in Arkansas and Missouri, recovery efforts are ongoing in Iowa, where several tornadoes touched down near Des Moines Saturday. Seven people, including two children, died in the storms, officials said.

Six Madison County residents were killed, according to county Emergency Management Director Diogenes Ayala. The oldest victim was 72 years old and the youngest was aged 2, Ayala said at a news conference in Winterset Sunday afternoon. He had earlier said there were two victims under 5.

A person in a rural area near the Lucas County city of Chariton was also killed, an official said.

Six people in Madison County were being treated for injuries sustained in the tornado, according to officials. Ayala previously said one adult had life-threatening injuries and three others had been hospitalized in serious condition.

“This is, I think, the worst anyone has seen in quite a long time,” Ayala said Sunday.

After the severe weather passed through, many residents began the arduous process of recovering from the damage inflicted.

In Des Moines, Shannon Brown told CNN affiliate KCCI she had just parked her Jeep at her home when the storm struck, with a tree crashing down on top of the vehicle. She was not harmed and said she was grateful for others in the community helping with cleanup efforts.

“You really realize who cares about you and just makes you feel special, you know you have all these people who are willing to help you,” she told KCCI.

Complicating the situation Monday is a cold front moving through the state, with areas hit by tornadoes now set to experience snowfall. The southern portion of the state began receiving snow late Sunday.
At least two of the tornadoes that hit on Saturday were preliminarily categorized by the NWS’ Des Moines office as EF3 intensity, meaning winds of 136-165 mph.

An initial estimate of the Madison County tornado that impacted Winterset showed it was an EF3, the NWS said.

Iowa Gov. Kim Reynolds issued a disaster proclamation for Madison County, allowing state resources to be used for response and recovery efforts, according to a news release. Additional counties may be added to the proclamation.

The Chariton tornado is also estimated to have been an EF3 with winds of 138 mph and was on the ground for more than 16 miles, according to preliminary NWS surveys.

Other tornadoes that touched down include an EF2 with estimated winds of 122 mph near Leon, which was on the ground for 19 miles, the NWS said.

The agency said Sunday it is still conducting damage surveys across the state and is working to determine how many tornadoes occurred.