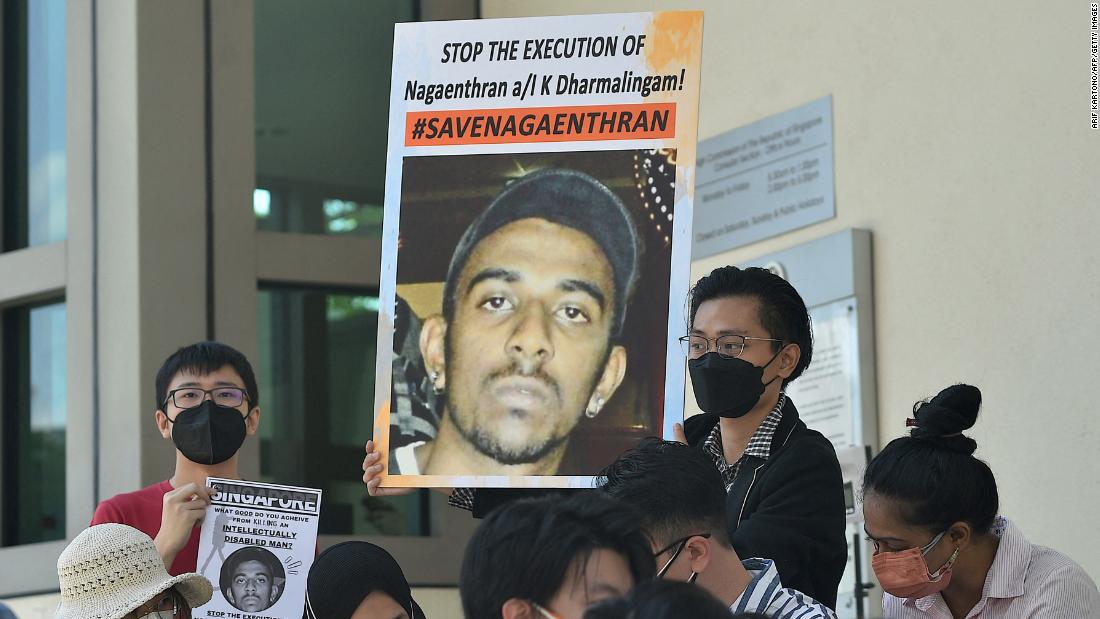 The ruling ends all legal avenues to stop his execution and supporters say he could be hanged within days.

The case has drawn international attention — including from the United Nations, Malaysia’s Prime Minister and British billionaire Richard Branson — and put the city-state’s zero-tolerance drug laws back under scrutiny.

Nagaenthran K Dharmalingam, a 34-year-old Malaysian citizen, was arrested in 2009 for bringing 42.7 grams (1.5 ounces) of heroin into Singapore. He was convicted and sentenced to death in 2010.

He appealed on the basis of mental disability and for his lawyers to start judicial review proceedings to halt the death sentence.

“The Court of Appeal has just dismissed the application and considered the appeal an abuse of process and that international law does not apply. Nagaenthran who is mentally disabled is due to be hanged possibly in the next few days,” said M. Ravi, who was part of Dharmalingam’s legal team, in a Facebook post Tuesday.

In his ruling, Chief Justice Sundaresh Menon said there was “no admissible evidence showing any decline in the appellant’s mental condition after the commission of the offense.”

“The case mounted by the appellant’s counsel was baseless and without merit, both as a matter of fact and of law,” Menon said, according to court documents.

The court also dismissed a request for Dharmalingam to be assessed by an independent panel of psychiatrists.

After his family were notified of his impending execution in October 2021, Dharmalingam’s lawyers launched a last-minute constitutional challenge. The High Court dismissed their bid in November but granted a stay of execution so the decision could be appealed.

That appeal hearing was then postponed because Dharmalingam contracted Covid-19. Tuesday’s verdict on the appeal exhausts Dharmalingam’s legal options.

“We are extremely concerned about rushed hearings and decisions in this case, in violation of Nagaenthran’s fair trial rights. Nagaenthran should be protected from the death penalty because of his intellectual disability,” Reprieve director Maya Foa said in a statement.

“The heart-wrenching fact that he believes he is going home to his family and talks about sharing home-cooked meals with them shows that he does not fully understand he faces execution and lacks the mental competency to be executed.”

Singapore has some of the strictest drug laws in the world.

Trafficking a certain amount of drugs — for example, 15 grams (0.5 ounces) of heroin — results in a mandatory death sentence under the Misuse of Drugs Act. It was only recently — and after Dharmalingam’s case began — that the law was amended to allow for a convicted person to escape the death penalty in certain circumstances.

Dharmalingam’s lawyers argued he should not have been sentenced to death under Singaporean law because he was incapable of understanding his actions.

They said a psychologist assessed his IQ to be 69, which is internationally recognized as an intellectual disability. At his trial, the defense also argued he had severe attention deficit hyperactivity disorder (ADHD), borderline intellectual functioning, and severe alcohol use disorder.

Dharmalingam has spent a decade on death row and during that time his condition further deteriorated, his lawyers said.

“He has not a very good sense of what is happening around him,” N. Surendran, a Malaysian lawyer who is representing Dharmalingam’s family, and adviser to Malaysian NGO Lawyers for Liberty, said in November. “He is disoriented. He’s got no real clue of what is going to happen to him.”

Surendran said executing Dharmalingam “would be tantamount to executing a child.”

The court on Tuesday, however, said there was no admissible evidence showing any decline in Dharmalingam’s mental condition.

The judge ruled the lawyers’ assertions of Dharmalingam’s mental decline were “self-serving” and “not supported by anything at all.” Menon, the chief justice, said the defense proceedings were carried in a way intended to delay the execution, according to court documents.

In January, rights group Amnesty International called the trial “a travesty of justice” and “unlawful under international law.”

“This includes the fact his sentence was imposed as a mandatory punishment and for an offense that does not meet the threshold of the ‘most serious crimes’ to which the use of the death penalty must be restricted under international law,” Amnesty said.