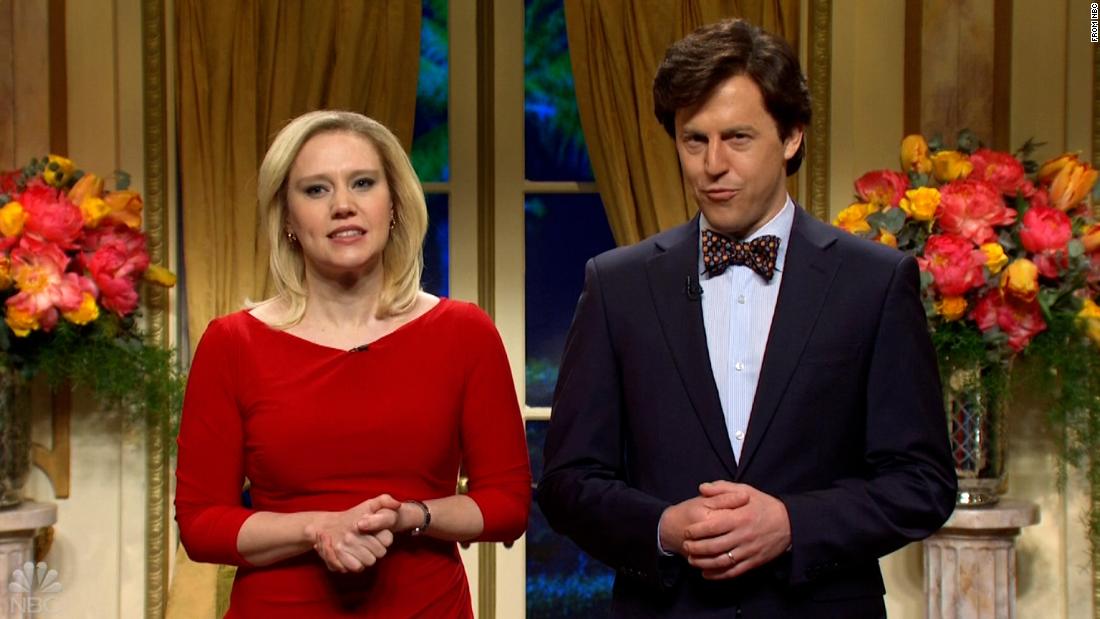 “Good evening, everyone. I’m Tucker Carlson. I’m like if a pair of boat shoes came to life,” Moffat’s Carlson said.

“And I’m Laura Ingraham, and when I watch Harry Potter I root for Voldemort,” McKinnon’s Ingraham added.

She explained the two were raising money via the telethon for “the real victims of this invasion: the oligarchs.”

“So please open your wallets. And because this is Fox News, you can either send money or take out a reverse mortgage,” Moffat’s Carlson told viewers. “So far we have raised over 8.3 billion rubles, which almost comes out to almost $12.”

The biggest guest of the spectacular, however, was former President Donald Trump, played by James Austin Johnson, who was manning the phones.

“My favorite food is probably bread, you know? And more specifically bun,” Johnson’s Trump told a caller on the phone. “Bun is great, especially with respect to burger. And you know what? They’re trying to go beyond burger, can you believe that? I’m going to stay right at burger. Beyond is not good. Joe Biden has gone beyond burger, and it has not done so well.”

McKinnon’s Ingraham then said she heard a dial tone on the other end of the phone call, so she moved on to explaining the prizes that the telethon was giving away.

That included sending Russian soldiers care packages that have a My Pillow and ten American flag catheters.

The spectacular wrapped up with another musical number that featured Johnson’s Trump singing “My Funny Valentine” to Russian President Vladimir Putin.

“I got something I’d like to say to Putin as well. Vladimir, I want you to hear this from me, you is smart, you is kind, you is important,” Johnson’s Trump said. “I love you, Vlad.”