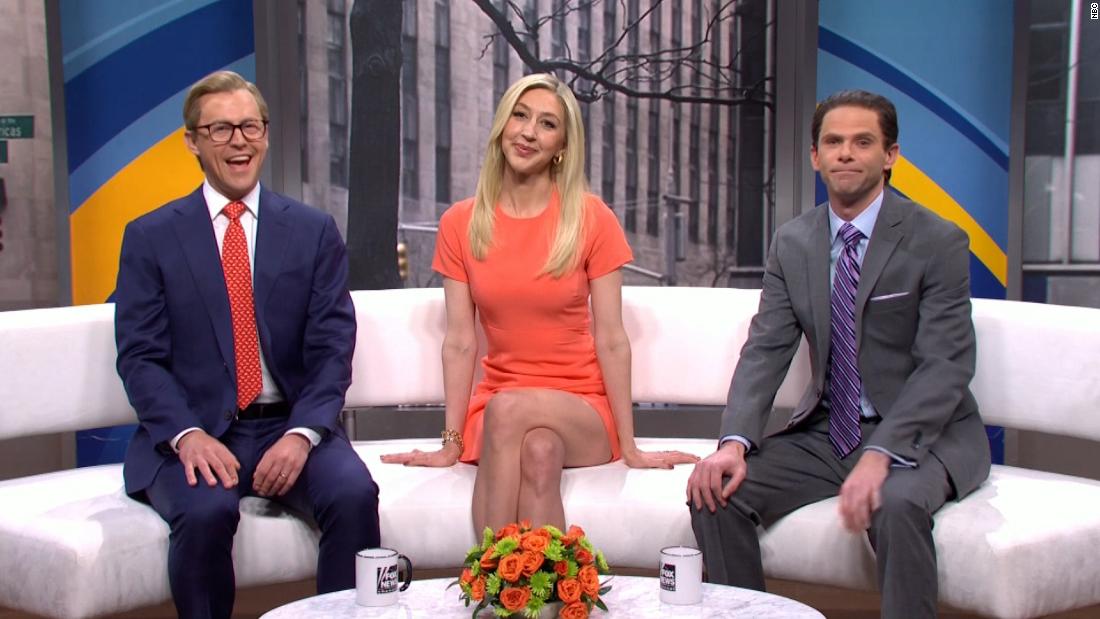 “I downloaded the app, opened it, and my phone immediately got very, very hot. Like, over 140 degrees,” Day’s Kilmeade told Ainsley Earhardt, played by Heidi Gardner and Steve Doocy, played by Alex Moffat.

The trio then welcomed Supreme Court Justice Clarence Thomas and his wife, conservative activist Virginia “Ginni” Thomas to the show. The couple, played by cast members Kenan Thompson and Kate McKinnon, cuddled on the couch as the hosts asked about Clarence Thomas’ recent hospital stay.

“You were just in the hospital, is that right,” Thompson’s Thomas is asked.

He chuckles before vaguely answering, “That’s what they say.”

When asked whether he was sick with Covid-19, Thompson’s Thomas again offers a short, noncommittal answer: “Anything is possible.”

The hosts then turn their attention to the revelation that Ginni Thomas sent multiple text messages to former White House chief of staff Mark Meadows between November 2020 and January 2021 urging him to keep up the effort to overturn Joe Biden’s 2020 victory, according to multiple sources.

“Now Ginni, the left is currently losing their minds over a couple of completely normal texts you sent to your pal Mark Meadows on January 6, is that right?” Day’s Kilmeade asks.

McKinnon’s grinning Ginni Thomas responds, “It sure is.”

“And now they want the honorable justice to recuse himself. I mean, you’re allowed to speak your mind,” Moffat’s Doocy says.

“Yes, and I don’t want any trouble. I take my duty as the Yoko Ono of the Supreme Court very seriously. All I want is the tidal wave of biblical vengeance to wash away the Biden crime family all the way to Gitmo and then we release the kraken,” McKinnon’s Ginni Thomas responds.

When asked whether his wife talked to him about her text exchanges with Meadows, Thompson’s Clarence Thomas says, “Some say yes, some say no.”

The “Fox and Friends” hosts then welcome Trump via a Facetime call from Mar-a-Lago and asked for his opinion on Smith slapping comedian Chris Rock during last weekend’s Oscar ceremony.

Trump, played by James Austin Johnson, tells the hosts he saw the slap and refers to Smith as his character from the movie “Hitch.”

“You know, I did see slap. I enjoyed slap. I was very impressed with my Hitch, you know. Quite an arm on Hitch, I always knew Hitch had an arm,” Johnson’s Trump says.

“That kind of behavior is not going to help Kevin James get a date with Allegra Cole, I’ll tell you that,” SNL’s Trump says referring to a plot from the 2005 comedy.

The hosts then turn to asking the former President about the investigation into the January 6 insurrection, directly asking him, “Did you commit a coup, sir?”

“No, no. You know what, there was no coup. It was an event, perhaps a take-back event, a coup perhaps,” Johnson’s Trump answers.

He is then asked about the seven-hour gap in White House phone logs from January 6 and weather he was using a burner phone.

“Nope, not true. Never used a burner phone. Except for perhaps January 6 during that seven-hour period,” he says.

The cast then comes together for the traditional, “Live, from New York, it’s Saturday Night!”