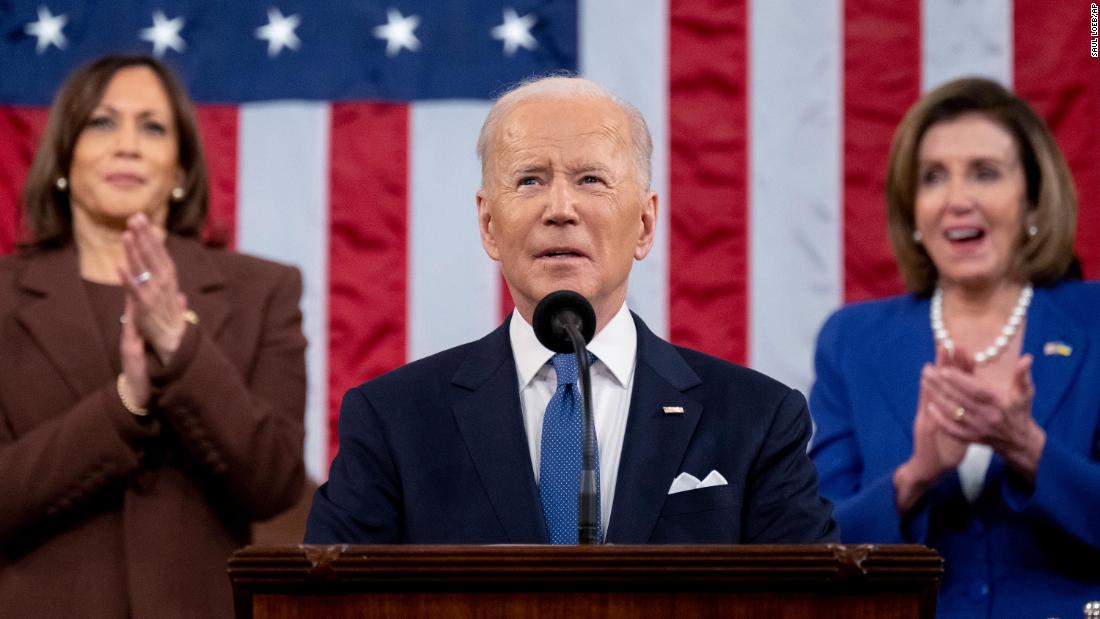 That’s a less enthusiastic reception than Biden received for his joint address to Congress last April, when 78% had a positive reaction and 51% reacted very positively. Both Donald Trump and Barack Obama also saw higher enthusiasm for their speeches during their second years in office: 48% of those who tuned in for Trump’s 2018 State of the Union were very positive, as were an identical 48% of those who watched Obama’s 2010 address. Biden’s 41% on that metric matches the previous low in CNN’s speech reaction polls dating back to 1998.

Good marks are typical for presidential addresses to Congress, as such speeches tend to attract generally friendly audiences. That’s true this year as well: The pool of people who watched Biden speak was about 11 percentage points more Democratic than the general public.

State of the Union addresses rarely have major, lasting impact on presidents’ approval numbers, but there are signs that Tuesday’s speech buoyed viewers’ opinions of Biden. Those who watched the speech say that Biden’s policy proposals would move the country in the right direction (67%) rather than the wrong direction (33%). In a survey conducted before the speech, those same people were closer to evenly split (52% right direction, 48% wrong direction).

A 55% majority of speech watchers say Biden has had the right priorities so far as president, with 45% saying that he hasn’t paid enough attention to the country’s more important problems. Prior to Biden’s address, just 44% said he had the right priorities, and 56% that he hadn’t paid enough attention to the most important problems.

The biggest shift in perception about Biden’s priorities came among the political independents who tuned in: just 30% in that group said Biden had the right priorities in pre-speech interviews, rising to 48% after his address.

But even those improved numbers fall short of where Biden stood last year. Following Biden’s 2021 speech, 72% of those who’d tuned in thought his economic policies would move the country in the right direction, and 86% believed his Covid-19 policies would do the same.

Speech watchers say, 69% to 31%, that Biden did enough to address Russia’s invasion of Ukraine. Three in 10 speech watchers say Biden’s address made them more confident in his handling of the situation in Ukraine, while 56% say that it didn’t affect their confidence in him to handle the issue, and 14% say it left them less confident.

They say, 62% to 38%, that Biden’s proposed policies on the economy will move the country in the right direction. Just shy of half, 47%, say Biden did enough to address inflation, while 53% say he did not.

A majority of speech-watchers say that based on what they’ve heard so far, they’re either enthusiastic about (23%) or satisfied with (47%) Ketanji Brown Jackson, Biden’s nominee to the Supreme Court. Another 24% are dissatisfied, and 6% say they’re angry.

A 64% majority of speech watchers say Biden’s comments on the U.S. economy were more important to them than his remarks on Ukraine, while 36% call Ukraine more important.

Surveys were conducted by text message with 544 US adults who said they watched the State of the Union on Tuesday, and are representative of the views of speech watchers only. Respondents were recruited to participate before the speech, and were selected by a survey of members of the SSRS Opinion Panel, a nationally representative panel recruited using probability-based sampling techniques. Results for the full sample of speech watchers have a margin of sampling error of plus or minus 5.5 percentage points.